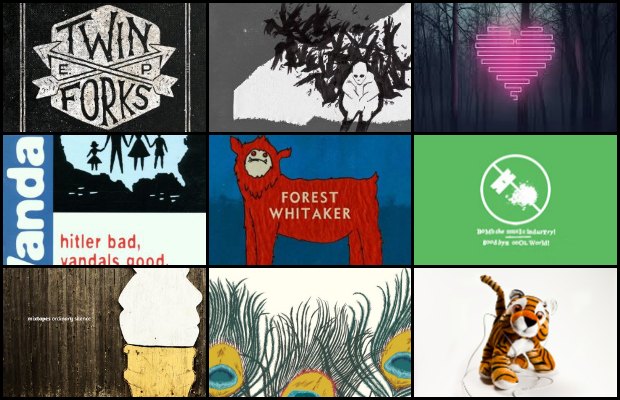 Whistling isn’t a frequently used trick in most musicians’ arsenals (unless you’re Andrew Bird or the Ying Yang Twins), but it’s a great way to make an otherwise pedestrian song pop in the mind of the listener. Here are 10 modern examples of whistling being employeed successfully. (Keyword: modern. Sorry, Axl.)

This article originally ran in AP 308.

ANDREW JACKSON JIHAD – “Sense, Sensibility”
Arizona folk-punk duo Andrew Jackson Jihad don’t shy away from unconventional instrumentation on Can’t Maintain. (“Kazoo Sonata In Cmaj,” anyone?) But “Sense, Sensibility” was the first time in their career they resorted to whistling on a recording, delivering a ripping solo that’s the length of a full verse and chorus. (Can’t Maintain; Asian Man, 2009)

The lead single from the second album by the side project of Kevin Devine and the bulk of Manchester Orchestra layers a memorable whistle lick over a distorted guitar lead. It was so memorable, the song was recently used on an episode of How I Met Your Mother. Now, if we can just get Kevin and Andy to cover “Let’s Go To The Mall,” we’ll have come full circle. (II; Triple Crown/Favorite Gentlemen, 2012)

BOMB THE MUSIC INDUSTRY! – “All Alone In My Big Lonely Apartment”

Before Jeff Rosenstock became a household name in the DIY punk community, he was a miserable 20-something trying to motivate himself to do something. This song perfectly encapsulates his apathy, as he strums a ukulele while plaintively whistling and singing, “Who cares about life when it’s big and lonely?” (Goodbye Cool World; Quote Unquote, 2006)

FITZ AND THE TANTRUMS – “The Walker”

One of a small handful of songs on Fitz And The Tantrums’ sophomore album that weren’t vacuously empty Hall And Oates ripoffs, “The Walker” is a blast of neo-funk with a hyper-infectious whistle hook. It’s so tightly regimented, it might just make you march through the streets (like in the music video). (More Than Just A Dream; Elektra, 2013)

One of the best songs off their debut full-length, the Jimmy Eat World-esque “Mechanical” finds Lemuria vocalist Sheena Ozzella repeatedly singing, “I’m not like you/I get comfortable/Shut up,” before the rhythm section falls out, leaving just Ozzella’s distorted guitar and a melancholy whistle solo that turns surprisingly motivational as the rest of the band kick back in for the closing crescendo. (Get Better; Asian Man, 2008) >>>