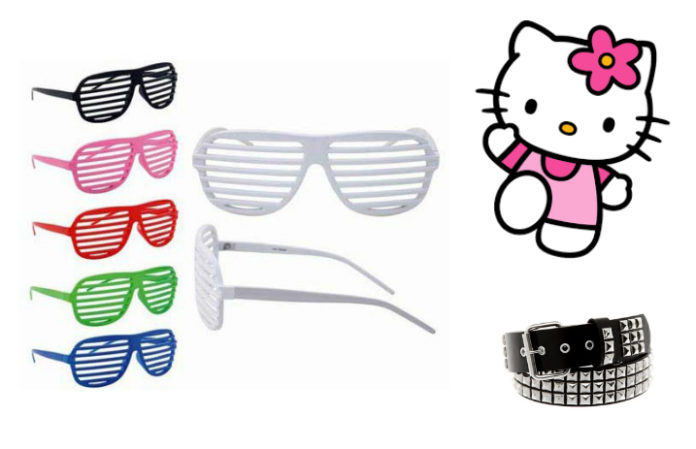 While photos from 10 years ago might look like ancient history now, who would have guessed we’d look back on the terrible haircuts and questionable fashion choices with any sense of nostalgia? Though we do miss the jelly bracelets and wide variety of piercings, we managed to whittle the list down to 10 incredible inventions that changed the scene as we know it.

If you didn’t live through high school in the mid-2000s, you might not know that bootcut jeans were like, all the rage back then. (You think we’re joking. We’re not.) Wearing skinny jeans was actually weird and edgy back then—it just took society like, three years to finally get onboard. Bonus points if they were black, neon or both!

Think about it: Did you have a single friend without bangs in the 2000s? Probably not. The thicker and more jagged the cut, the better.

Did these actually protect your eyes? No. Did they actually look cool? Absolutely not. Did we still wear them indoors, outdoors and to parties, funerals and church? You bet.

Also known as “pyramid belts,” these things were a scene kid staple. Is something really a fashion accessory unless you have to have it checked by the school police officer to make sure it’s not a weapon?

The Devil Wears Prada knew what was up when they slapped Reptar on a shirt in the mid-2000s. Whether it was sporting that neon-pink monstrosity or wearing a long sleeve shirt featuring the slogan “Rawr means ‘I love you’ in dinosaur,” for some reason prehistoric beings were popular amongst the emos. Maybe it was because both communities are obsolete. Who knows?

How else were you supposed to passive-aggressively tell Tiffany that she tooooootally crossed a line when she gave her copy of A Fever You Can’t Sweat Out to Josh instead of you? Set your away message to those “The Only Difference Between Martyrdom And Suicide Is Press Coverage” lyrics—that’ll show her.

Read more: 10 lyrics that would have been perfect AIM away messages

Now, hair extensions aren’t anything new. However, zebra print hair extensions…that’s something. Pairing multiple colors and styles together was years ahead of Jack Donaghy’s proud invention of “power clashing.”

While the modern-day person might be trying to perfect a wing, back then we were just carving the stuff on our lids and hoping it lasted through our 6 p.m. dress rehearsals of Grease. As Brendon Urie quoting Pete Wentz says, “Makeup is fucking great for a guy because it makes a guy look beautiful…I want to make sure that everybody thinks guys are beautiful.”

If you were worried about what to pair with your bright pink dinosaur T-shirt and royal purple skinny jeans, why wouldn’t you turn to acid green skate shoes that were likely two sizes too big for you? Because what better fashion statement is there than skinny ankles and gigantic feet?

Be real: We all wanted one ‘cause Pete Wentz had one. And because of what Pete Wentz did with one. Love ya, Pete.