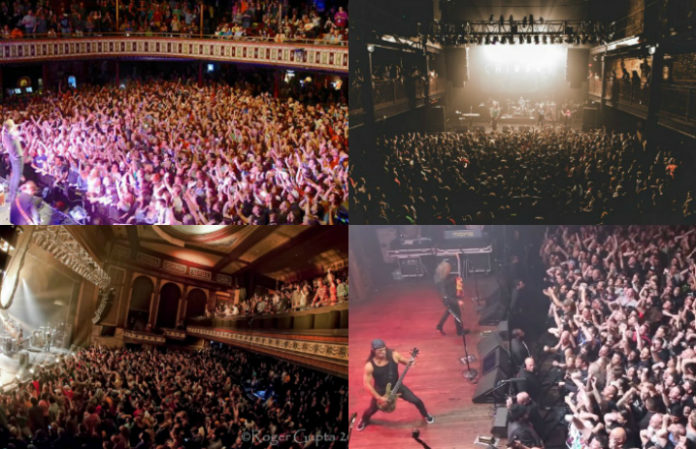 While ritzy new venues certainly have all the amenities in the world, there’s nothing quite like seeing a concert in a room with character. From stories of historical happenings to amazing architectural charm, here are 10 historic venues to visit.

Opened in 1957, this 500-capacity venue has housed some pivotal performances from respected names in both music and comedy. Elton John, Bob Dylan, Led Zeppelin, the White Stripes, Prince, Queens Of The Stone Age, Zach Galifianakis, Dave Chappelle and Steve Martin have all performed there. More recent performances include Good Charlotte’s 2016 reunion show. The Troubadour is here to stay standing as a legendary monument for music.

Hosting the likes of everyone from Bad Brains and Minor Threat at the original downtown Washington D.C. location to the Smashing Pumpkins and the Beastie Boys at the newer U Street location, the brand that is the 9:30 Club is authentic. The wild history of notable occurrences onstage and behind the scenes is endless. Jimmy Eat World recorded their DVD Believe In What You Want at the space in 2002, Alice In Chains started a U.S. tour at the venue with new singer William DuVall in 2009 and Adele sold out a show in two minutes in 2011. The 9:30 Club holds some significant moments in a plethora of bands’ careers.

Red Rocks Amphitheatre is one of the most visually stunning environments to be able to watch live music with thousands of other people. A natural amphitheater set into the side of a Colorado mountain, this venue boasts a capacity of 9,525, old-school bench seats and amazing views. Events at the outdoor gathering spot have been occurring since 1906, but the Beatles, Jimi Hendrix, U2, the Grateful Dead, Mumford & Sons and a slew of festivals from Mayhem Fest to Warped Tour are among the noteworthy mentioned. You can definitely say this venue…rocks.

The two rooms of this venue—the Mainroom and the Entry—were originally a bus station back in the mid-20th century. Today, the roster looks much more like our scene (Dashboard Confessional and AFI are booked to play this month). However, First Avenue definitely has its hand in history: It was showcased in Prince’s film Purple Rain, Motion City Soundtrack recorded their Commit This To Memory DVD at the venue and in 2011, Cory Smoot of Gwar performed his last show on the Minnesota stage hours before his death.

The indoor theater known as the Electric Factory has hosted Yellowcard, Underoath, the Fray, the Starting Line and Lamb Of God. For 40 years, the Philly spot has proven to be one of the most celebrated in the area. Upcoming events include everything from Rick Astley to Bayside.

The only surviving auditorium in “Theatre Row,” the 700 block of Broad Street where theatres riddled the section of town, the National is on the National Register of Historic Places. The old cinema was reopened for live entertainment in 2008. Everything from pop to metal is on the schedule now as events such as August Burns Red, Pepper, Less Than Jake, JoJo and Kehlani are all on the books for 2017.

In the heart of Manhattan lies the structure known as the Bowery Ballroom. The famous Bowery Ballroom was actually vacant from the Wall Street Crash of 1929 to the end of World War II; from there it was turned into a retail store. In 1997, it shifted owners and became a 575-capacity music ballroom. The intimate setting is now the perfect place to catch Moose Blood or Pinegrove (both coming to New York this spring).

The NorVa Theatre opened its doors in 1917 as a 2,000-seat Vaudeville theater. Acquired by Anschutz Entertainment Group in 2014 for a whopping $5.9 million, the space, named after the slang abbreviation for its hometown of Norfolk, Virginia, puts on shows for all genres. James Brown, Prince, Chevelle, Snoop Dogg and Kendrick Lamar count themselves as alumni.

A traditional tabernacle is a gathering area for religious worship, but this house holds significantly different services now. The Tabernacle was originally a church, but was purchased in 1994 to become a venue for the 1994 Olympics in Atlanta. Development didn’t go as planned, and it was remodeled to be one of the more popular concert venues in the area. Since then, the multi-tiered indoor venue has held television broadcasts of Conan, been damaged by a tornado and holds shows of both legendary and new-school names.

The three-room Webster Hall, only a few minutes from Union Square in the heart of New York City, has seen its fair share of artists through the years. Built in 1886, the club/music hall has an inside characterized by stunning Renaissance Revival architecture. One look and you know history has happened here. (How about the rumor that Al Capone was an owner during Prohibition?) The fact that this NYC landmark once hosted early shows from My Chemical Romance and Fall Out Boy doesn’t hurt, either.