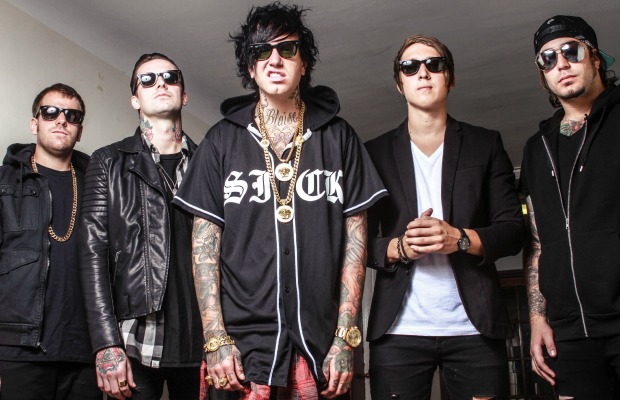 In terms of pop culture, 2014 was an interesting year to write for a music website, and by “interesting,” I mean completely bonkers. At one point, it seemed like every week something “controversial” was happening, ranging from physical altercations to publicity stunts to serious crimes. Aside from those varied concerns, the concept of “proper” show etiquette and the social contract between fans and musicians dominated scene discussion. The fan’s acceptable relationship with the stage, in particular, became a never-ending debate that surfaced again and again, as multiple devotees climbed up for selfies, or kisses. As 2014 comes to a close, let’s look back on some of those provocative moments. Here are 10 music controversies that caused quite the ruckus this year:

Stop trying to kiss musicians onstage
You know what's not okay? Jumping onstage and forcibly kissing a musician during their performance. That's what happened to Britty Drake of Pity Sex and Tigers Jaw's Brianna Collins at a show in Brooklyn, when some creepy bro interrupted both their performances and shoved his fucking face right into their lives. “IT IS NEVER OKAY TO TOUCH SOMEONE WITHOUT THEIR CONSENT,” Collins said in a statement, which made you hate the world, because you realized some people still need that spelled out for them. “I just feel sorry for him because he actually thought it was something we would be excited about,” added Drake. Being sexually assaulted is never part of a performer’s job description and will never be an acceptable side effect of fame. Stay off the stage.

Upon A Burning Body singer's bogus kidnapping
In July, Texas metalcore act Upon A Burning Body announced that their singer, Danny Leal, had been reported missing and was last seen in San Antonio. At the same time, Leal's final tweets before his “disappearance” gave the situation more sinister undertones. “This same sketchy car has been driving past my house over and over for the past three days straight,” he said, following later with, “Wide awake now… I could’ve sworn I heard someone in my house.” AP received radio silence from the band's camp, but we were informed by a police spokesperson that they didn't have a missing persons report for a Danny Leal on record. At the height of the chaos and fans' anxiety, the band announced their new album and released a single. The CEO of Sumerian Records, UABB's label, later called it a publicity stunt and said it was done behind his back. When asked about the incident in a later interview, Leal responded with a straight face, “What publicity stunt?”

Stage-divegate
Joyce Manor ignited controversy in the punk scene when they took a public stand against stage diving this year. At a show in Florida, frontman Barry Johnson cut the band's set and shamed a stage-diver in front of the audience. “It's completely unacceptable for him to impose himself on top of you,” Johnson said to a “much smaller” girl in the crowd. It was a very loud week: Every band had an opinion, and every website has an op-ed section. A few days later, it happened again at a Joyce Manor show in Houston. This time, some troll went to the show just to stage dive and piss off the band. Johnson stopped a song mid-performance, grabbed the stage-diver and called him a “patriotic straight-edge piece of shit.” He continued, “You don’t have to like our band; you don’t have to be here.” Johnson stuck to his guns, eventually offering would-be stage-divers a refund for their tickets in advance.

The Story So Far vs. Warped Tour security
At the Montreal Warped Tour date, the Story So Far frontman Parker Cannon cemented his place as pop-punk’s No. 1 “man of the people” hero when he jumped offstage to save a fan who was being choked and pushed by security. Here’s an insider tip: As a musician, one of the best career moves you can make is defending your fans against bad venue security. When you see a member of security being too rough with a fan, berating the aggressor from the stage works just fine (you have the mic, they can’t respond, you win), but you can also physically intervene. Your fans will cheer you and love you even more, fan-shot video of the incident will go viral on YouTube, music websites will interview you, and new fans will flock.

Selfiegate
The stage selfie is really becoming a nuisance. If you’re not familiar, it’s when a fan jumps onstage mid-performance, pulls out their phone and takes a selfie with the band members. Now, believe it or not, there are actually people who think they have every right to do this if they bought a ticket. Because when Every Time I Die’s Jordan Buckley kicked one such fan’s phone out of his hand, he was met with some online backlash. “You have to be the biggest, most fucking selfish asshole in the industry to do that,” reads the top comment on our story. Wait, this is actually up for debate? Shouldn’t the only comment be “Tough luck. Maybe that’s the risk you take when your selfie interrupts a hardcore band’s performance”? Think about it: It’s a performance. Would you jump onstage during a Broadway play and take a selfie with the actors? Your body and camera flash are interrupting art. Why not pencil yourself in next to Mona Lisa while you’re at it? FYI: The fan didn’t even lose his phone, and all was right with the world, but the debate kind of raged on past this single incident.

Up-and-coming vocalist arrested for domestic abuse
In October, the career of rising post-hardcore band Miss Fortune came to a screeching halt when frontman Mikey Sawyer was arrested on charges of domestic assault. Shortly after, the band were dropped by Sumerian Records, its CEO Ash Avildsen saying, “We do not condone domestic violence, nor would we ever support an artist that does.” Sawyer was eventually cleared of the charges, but Miss Fortune’s relative inactivity makes it looks like the damage was already done.

Fat Mike kicks a fan onstage
At a NOFX show in Sydney, Australia, a fan climbed onstage and put his arm around vocalist/bassist Fat Mike. The frontman must have been startled, because he responded by hitting the fan in the face and kicking him in the head. Mike apologized to the kid on Twitter, saying, “You grabbed me by the neck. I defensively reacted.” Eventually, he made amends, giving the fan some gifts, letting him sing “Linoleum” onstage and allowing him a free kick. TMZ was there to film the awkward exchange, where the fan had to take off his boot and put on a fluffy slipper before he was aloud to kick fat Mike.

Attila’s homophobic slur
Eyes rolled when Attila’s first new single, “Proving Grounds,” came out earlier this year. On the track, the band’s frontman, notorious shit-starter Chris “Fronz” Fronzak, used a homophobic slur—you know the one. Senses Fail’s Buddy Nielsen was the loudest in his response to Fronz. “How many times can Attila insult the LGBTQ community in three minutes?” Nielsen said. “I lost count.” Fronz responded with a jab, “If you think I'm homophobic in any way possible, you're clearly either an idiot or you're in a washed-up band that nobody cares about.” In an interesting turn of events, two weeks later, Nielsen came out as a part of the LGBTQ community. Fronz eventually explained the song and the line in question (“So who’s the f*ggot now?”). “People have always talked shit to me my entire life, and I’ve used it as a positive influence to work harder,” he said. “People always tried to make me feel bad and call me a ‘f*ggot,’ but who’s the f*ggot now?”

Steve Klein charged with lewd conduct with a minor
One of 2014's most disturbing stories came in March when New Found Glory founding guitarist Steve Klein was accused of sexual misconduct with underage girls. The San Luis Obispo Tribune reported that Klein was “facing five counts of lewd acts on a child, as well as one count of contact with intent to commit a sex offense and possession of child pornography, stemming from sexual two-way chat room videos allegedly involving underage girls.” NFG parted ways with the guitarist before news broke, releasing their eighth studio album in October. Klein's case is still ongoing.

Tim Lambesis with internet access
In May, As I Lay Dying frontman Tim Lambesis was sentenced to six years in prison for attempting to hire a hitman to kill his estranged wife Meggan. The verdict wasn’t a surprise, but the months leading up to it sure were full of them. After posting bail, Lambesis was placed on house arrest. He had internet access, and things got weird.

First, he basically started a book club on Tumblr, which felt like inappropriate timing, to say the least. Next, an apparently anonymous poster used the official As I Lay Dying Facebook account to try to sell a guitar. (It’s worth noting the other four members of the band didn’t have access to the Facebook page at this time.) The person selling theguitar then got into a bizarre series of exchanges with angry fans, saying things like, “Tim is taking a new look at topics of faith that he at one point had sworn off altogether.” Lambesis eventually confirmed in an interview with AP that he was the one selling the guitar and, apparently, referring to himself in third person.

Finally, a major announcement appeared on the band’s official website, written by a person who again referred to “Tim” in the third person. The post started out normal, seemingly from the band. “We said we’d update fans as soon as we knew more,” it read. But things got real weird real fast, as the writer immediately began defending Lambesis against things that had been “falsely reported.” The post read, “Tim was not a Christian at the time of his arrest, nor was As I Lay Dying a Christian band in 2013,” which is totally not an odd thing to say at all. The post eventually announced that AILD were on hiatus and prematurely unveiled the other four members’ new band, Wovenwar, and their new singer, Shane Blay, before they could announce it all themselves.