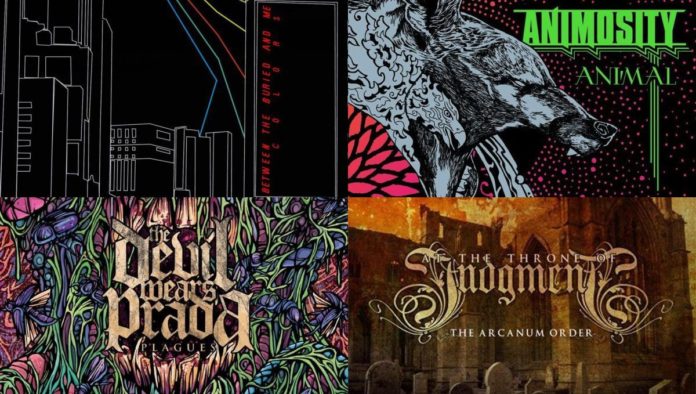 There was a decent selection of solid metal releases in 2007. To recall a few, the Ocean, Blotted Science, Rosetta and Baroness all released some of their best work that year. This list, however, serves as a reminder of some metal bands that had a bit more crossover appeal with fans of other genres, the ones popular among those who might have chosen Warped Tour over Ozzfest without hesitation (even though the latter was “free” that year).

Some of these albums might be more obvious than others, and some might take a few tracks before you begin to recall exactly where you were the first or last time you heard them (if ever at all). A few of these bands are no longer active, and some might have even been on the same label as your favorite screamo or pop-punk band that year. Regardless of your connection (or lack thereof) to these albums, they've all managed to hold up incredibly well since their initial release in 2007. Dig in and see if you agree.

Maybe the most difficult band to define on this list, the Number Twelve Looks Like You have had a long line of genres and labels attached to their name, but there's really just no band quite like them. Between the lengthy, Twilight Zone-inspired moniker and absolute breakneck whirlwind of styles and ideas that whip through your ears while listening, this New Jersey everycore band is typically an acquired taste. Those who have the palate for it, though, will probably tell you that the band's third studio album, Mongrel, is still an incredibly fun experience and perhaps the Number Twelve's best work.

“Mongrel felt like it was a statement piece, like we had something to prove,” vocalist Jesse Korman tells AltPress. “Our previous albums were incredibly enjoyable to write and play live, but it was with Mongrel that we said, 'Okay, now let us show you what we can really do.' Each one of us pushed ourselves into the most difficult and uncomfortable zones searching for the best parts we could create and perform in each song. Being categorized as an experimental, jazz-fused, mathcore, tech-metal, screamo band from New Jersey was not an easy task to 'make it' in the music world with. Mongrel felt like the record that would change that for us, and it did.”

At The Throne Of Judgment – The Arcanum Order (July 24)

The Arcanum Order served as this Ohio band's sole full-length and was also an interesting pick-up for Rise Records, as the album was really the label’s first release that was straight, no chaser, riffy metal devoid of clean vocal choruses or any melodic frills. Similar to acts like Knights Of The Abyss and As Blood Runs Black, At The Throne Of Judgment delivered shredding guitars, pummeling drumming and occasional breakdowns, but mostly just heavy, driving metal with high and low vocal intensity. The album still delivers thrill after thrill with impressive solos and loads of raw vehemence. If this one never made it on your radar, it's still worth diving into now.

Reflecting back on his time with the band, former bassist Adam McKibben says, “I feel really fortunate to have been a part of it. I would be lying if I said that the album and the experience with the band as a whole didn't have some major influence on where I am today. A lot of the experiences I had in college, the ways I am able to make a living and the place I live could all be traced back to the band. When we were making music, we didn't think of what we were doing as special or anything that would build into our futures [but we] were fortunate enough to catch a few breaks, get some recognition and travel the country. We were lucky enough to live through and experience things that few people get to. Looking back on it,” he concludes, “the whole thing feels pretty surreal, but I would still give that part of my life a ton of credit for where I've ended up and where I'm going.”

Arsonists Get All The Girls – The Game Of Life (August 14)

The Game Of Life is bonkers, no doubt, but it's actually a more polished, reeled-in version of Arsonists Get All The Girls than we got on the band's insanely raucous debut, Hits From The Bow. Their sophomore release was still ripe with gnashing vocals, frantic drums and smirk-inducing keyboard parts. But the album was more calculated and structured with a tad more variety and some tastes of what we'd eventually hear explored and developed even further on future releases.

Speaking to AltPress about the band's sophomore release, former co-vocalist Cameron Reed says: “I feel like TGOL was a more mature step forward in our musical career in both song structuring and how we wanted to be perceived in the metal and hardcore scene. We put a lot more thought into [this] album than Hits From The Bow. TGOL shows that you can still have a ton of fun and a sense of humor and be taken seriously at the same time. We liked being weird and different because that allowed us to explore so many different avenues musically and not have constraints on where we wanted to go.”

A decade later, The Game Of Life is still an absolute blast to journey through, and that reminds me: If anyone's interested in starting an environmentally friendly grindcore band called Arborists Get All The Squirrels, get in touch.

The Devil Wears Prada took the template they created for their 2006 debut and quickly refined it to churn out what's arguably their most beloved full-length just a year later―almost to the day. Everyone knows that the band's Zombie EP is hands down their best release, but as far as their lengthier efforts go, Plagues seems to still be most fans' go-to a whole 10 years later. It's heavy. It's theatrically epic. It has those heart-stopping 808 hits and sing-your-heart-out, melodic choruses. It has that brief but perfectly seamless Craig Owens guest spot. It's just a fun-as-all-get-out metalcore record, and it's still got the charm thousands of days later. However, as TDWP have grown significantly over the years, they've also distanced themselves from any reverence they may have once had for their earliest works.

“'Catharsis' seems to be the go-to term in describing one's newest work,” vocalist Mike Hranica says via email. “A musician writes a new record and will soon, very likely be questioned on how cathartic the songs are. Through that lens, it's interesting to look back at Plagues. The band has been unabashed and quite vocal with our dislike of our first two records, especially with fans frequently asking for a 10-year anniversary tour. I've always done my best to keep non-complacent and maintain the need to up my own work, so with that, 10-year-old songs feel like a lifetime away. Still,” he adds, “I know the honesty we've always instilled into our records, which feels like the prevailing testimony to looking back at Plagues.”

Between The Buried And Me – Colors (September 18)

Following the success of 2005's Alaska, Between The Buried And Me took a huge risk with the writing of their next original studio release, Colors, an album that truly splayed the ends of the modern metal spectrum. With only eight tracks, Colors still pushes past an hour in length, taking the listener on a journey of initially jarring extremes, beginning with the mostly gentle, piano-led opener, “Foam Born (A) The Backtrack,” and wrapping up with a sprawling, 14-minute, heavy epic of a closer, “White Walls.”

“Colors was our statement of rebellion,” guitarist Paul Waggoner tells AltPress. “We were challenging how others identified us in the context of heavy metal, and ultimately we were challenging how we identified ourselves. It was some kind of musical manifesto, in which we found new purpose and direction simply by throwing caution to the wind and purging every ounce of creative energy we had, regardless of how unhinged it may have seemed at the time. Looking back 10 years later, it's no wonder Colors was the most pivotal album in our journey thus far, and it's hard to imagine where we'd be now without having written it.”

Colors, today, is still widely considered to be BTBAM's most impressive work, even for a band that continues to evolve with each release and push the boundaries of what is possible in the metal genre.