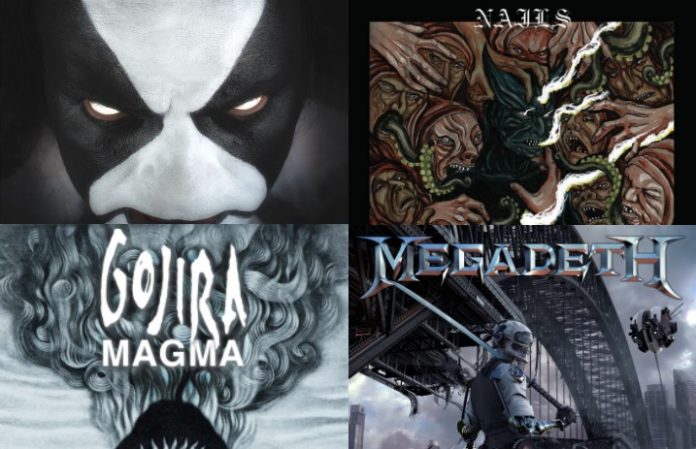 We are halfway through 2016 and it’s already been a banner year for extreme metal, with standout albums from both new and established bands. While it’s far too early to say what is this year’s best—some of the year’s most anticipated metal records will be out in the next six weeks—we thought it would be a good time to look at 10 releases from the first half of the year that should already be on your playlist.

Abbath – Abbath (Season Of Mist)
Abbath is one of the godfathers of Norwegian black metal and helped shape much of the genre with the legendary band Immortal. When he broke away from his old bandmates, there were doubts about his ability to do it alone, but the naysayers were quickly silenced with this excellent record, which relies on his past without sounding like a copycat.

BAT – Wings Of Chains (Hell’s Headbangers)
This album, featuring members of both DRI and Municipal Waste, will hit a sweet spot for fans of bands like Venom and Midnight. It’s stripped down, bullshit-free metal that will bum out casual listeners and delight those who still spin Paul Di’Anno-era Iron Maiden on a regular basis.

Cobalt – Slow Forever  (Profound Lore)
Cobalt was originally the project of Phil McSorley and musical protégé Erik Wunder. Their work was defined by McSorley’s visceral rage and stories of war (he served in Iraq) and Wunder’s expansive vision. While McSorley is gone, the addition of Charlie Fell (ex-Lord Mantis) provides the band another avenue for growth. Fell’s snarling voice and lithe, poetic lyrics touch on smoldering rage and animalistic fury.

Exmortus – Ride Forth (Prosthetic)
Exmortus celebrates the eternal joy of being a metal fan, shredding and playing regardless of what’s happening in the world. Their fourth album is an unrepentant celebration of riffs, battle stories and next-level guitar heroics. If you don’t like it, you probably don’t like metal.

Gojira – Magma (Roadrunner)
This French band is one of the biggest metal acts in the world. The sixth Gojira album finds the Duplantier brothers delivering their most concise yet heartfelt album yet.

Inter Arma – Paradise Gallows (Relapse)
Although this album won’t be available in stores or online for about another week, we’d be remiss to not include it. Building on an already impressive career, this genre-bending album—critics have to throw in a thesaurus to review it—is their best in an already packed catalog.

Inverloch – Distance/Collapsed  (Relapse)
There is a strange paradox to death metal: it is a form that can be hopelessly conservative and tradition-bound while also wildly experimental. Inverloch, a band that also touches on doom metal, offers tradition and invention in an album that is effortlessly musical yet uncompromising.

Megadeth – Dystopia (Universal)
Does Dave Mustaine say poorly timed things that get more attention than his actual music? Yes. Why does he still get attention? The thrash staple continues to produce music worthy of his late ’80s and early ’90s heyday. Give this a spin and hear for yourself.

Nails — You Will Never Be One Of Us  (Nuclear Blast)
In their brief but already memorable career, Nails have delivered albums that need little real estate to deliver a hellacious beating. This album is their longest (at 21 minutes) but also, remarkably, most fierce. Todd Jones and his cohorts deliver the eternal soundtrack for deadlifting, head butting and a concise statement of rage for a world of Twitter feeds.

Oranssi Pazuzu Värähtelijä (Svart/20 Buck Spin)
While Nails are all about brevity, the Finnish band Oranssi Pazuzu offer a twisted and psychedelic take on black metal for fans of bands like Leviathan and Bosse De Nage. At nearly 70 minutes this is not a journey for the easily distracted, but it rewards those with the patience to peel back the layers.