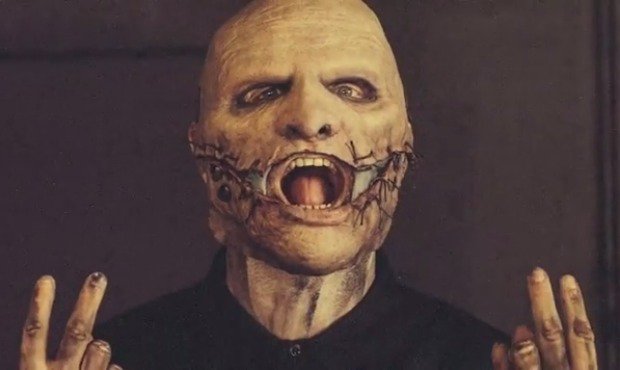 Are you a fan of video games like Mortal Kombat? Are you old enough to remember MTV’s Celebrity Deathmatch? Now let’s take those two ideas, mash ’em up with a focus on metal. Who would you want to see pitted against one another in the ring? What would their special fatality finisher be? We thought of how to create a well-balanced roster, and picked our top 10 choices for metalheads we’d want to see in a fighting video game.

The Great Big Mouth would obviously make an appearance on the list. Like the buildup to a Slipknot song, he would let his opponents exert all their energy before coming in with a full-on assault with his fists. When Corey goes off on a rant (or rampage), you know there is no slowing him down. And you know with all those masks he would be terrifying as hell to meet face to face in the ring.

Fatality: “Killpop” – After some relentless screaming drops the opponent to their knees, Taylor lets out punch after punch upon them until they’re nothing but mush.

How could we not put one of the superhuman thrashers from one of metal’s most sinister bands on this list? Only a select few compare in skill to the face-melting riffs of Kerry King. He would absolutely be using that guitar as his weapon of choice. We can see King throwing a quick head-butt in (’cause if you’ve ever seen him live, you know how the dude seriously headbangs), just to whip out the guitar and finish his opponent off.

Fatality: “Implode” – Right when the opponent is about to charge King, he pulls out his guitar and begins shredding. The speed picks up more and more until eventually the opponent’s head implodes, with blood raining down on the stage.

Imagine a ring cloaked in shadows and one spotlight in the center. Under that light is George “Corpsegrinder.” This no-neck beast already looks like he eats people for breakfast—without milk. Corpsegrinder doesn’t need any weapons; he would literally crush someone with his size alone. He is the definition of a physical force to be reckoned with.

Fatality: “Demented Aggression” – The opponent attempts to wail on Corpsegrinder, but he stands there feeling nothing until he backhands them like a fly. As they try to recover, Corpsegrinder picks them up and slowly begins shoving their skull into their chest cavity. This would end with him squishing their whole body into a small ball of bloody flesh. Yum.

Nergal may be a pretty small guy compared to others on this list, but who’s to say size matters? No, we see Nergal as one of those characters who would wield magic. Some fireballs, a bit of lightning, perhaps raise a zombie to start wearing down his opponents. If you’ve ever seen Behemoth live, you already know this dude looks like a combat-ready warlock.

Fatality: “Ov Fire And The Void” – Nergal summons an ancient tree from the ground as his undead slaves take a giant stake and impale the opponent. After some evil chanting, he sets the enemy on fire, while ravens come out and begin biting at their skin. (Who’s gonna referee these matches? Daryl Dixon?—ed.)

We can’t just have one magic user on here, can we? Filth  is an expert in all of the gothic dark arts and knows plenty of Victorian creatures to call upon in aide. We see him as more of a summoner who makes ghouls and monsters to do his dirty work for him.

Fatality: “Cthulhu Dawn” – As his opponent is about to begin fighting him, Filth takes a step back and disappears into the shadows. Then all of a sudden, immense tentacles come out and grab the opponent, tossing them around the ring. Once the opponent is dropped and they stand up, these terrifying jaws come out and chomp right into them.

While she’s no longer in Arch Enemy, we will never forget the ferocity Angela Gossow brought to metal. Her energy and vocals are up there with some of the best, and you know that’s what she would use in a fight. We see her  zipping by, decking punches out left and right, and just before the opponent goes down, letting out a beastly roar that tears them apart.

Fatality: “Savage Starbreaker” – With all her rage, Gossow runs in and rips off a limb from the opponent. She then lets loose a savage beat down with her fists before ripping off another limb. She continues this process until there are no limbs left.

The newest addition to this line up of veterans is not to be underestimated. Like the music of Abnormality, she would use sound and technology as her weapon, emitting high-pummeling frequencies that would incapacitate her opponent until she could run up and dig her nails in for the finishing blow.

Fatality: “Swarm” – Using her robotic attachments, Sundaramurthy would send out a frequency high enough to blow out the opponent’s ear drums. While they are writhing in pain, she would call in a swarm of robotic bees who would continuously stab at the opponent and burrow into their body and cause pain from the inside. This would go on until their sanity was lost and they dropped dead.

Perhaps the craziest combatant on this list. When not performing, Cavalera  seems like a chill dude… but that all changes once he is behind the mic. We could see this Brazilian juggernaut use speedy hand-to-hand combat, while resorting to elemental abilities of fire and nature as his backup.

Fatality: “Mother Of Dragons” – Cavalera  would surround his opponent in a circle of fire and entrap them. From there, he would use all his power to summon a giant beast from the earth. Part dragon and part plant, this being would begin using vines to suffocate the enemy, before devouring them whole.

In fighting games, you can’t just have one big guy: You want to be able to watch two giants go up against one another. And who better to match George Fisher than Dethklok’s own Nathan Explosion? We already see the onslaught that comes whenever Nathan is playing live—what do you think would happen if he harnessed that into a weapon? But honestly, we see Nathan as a traditional sort of dude, going aggro into the ring with a battle axe.

Fatality: “Crush The Industry” – Nathan would go into berserker mode and obtain a giant axe. This axe would be used at first to emit strong beams of lightning that would take out both the opponent’s eyes. Once they were clutching their face, Nathan would use said axe to plunge into their head ever so slightly, only to use his hands and tear them apart.

The Black Dahlia Murder frontman  would be one of those fighters with a few tricks up his sleeve, being someone skilled in sporadic hand-to-hand combat, but quite the trickster. For all his horror shenanigans, we see him using gadgets to take down his opponents before running in to throw in the beat down. And we aren’t talking Batman gadgets here: Think more along the lines of pumpkin grenades or jack-in-the-boxes that pop out and wield sickles… You know, normal shit.

Fatality: “Abysmal” – This is a toxin  Strnad has created for special occasions. Once he is close enough to his opponent, he injects them with this serum, and within seconds they begin having horrific hallucinations. The victims  see people attacking them, creatures from other worlds approaching them, and with the fear being all too much, they begin ripping themselves apart until they are no more.