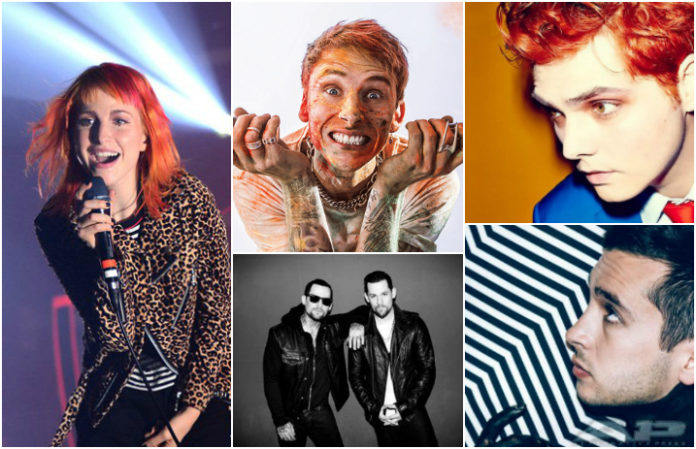 On the surface, there are few similarities between punk rock and Broadway: Both share a stage, but there’s an ideological disconnect—expensive art vs. the kind you can make with three chords and a shitty guitar, reviews in The New York Times and reviews in Alternative Press. When these things meet, however, greatness can occur—think back to Green Day’s American Idiot musical or just last week when Panic! At The Disco mastermind Brendon Urie announced he will be joining the cast of Kinky Boots to star as Charlie Price in the hit musical. Urie will head to the Big Apple May 26, but until then, we’ve started scheming: Who should head to Broadway next?

This one seems almost too obvious, right? The former My Chemical Romance frontman has released a solo album, but spends most of his time in comic book world. Broadway would prove to marry the theatrics of both pursuits, and allows musicians to have a regular schedule. We think Way would be into the consistency!

The Paramore powerhouse has a voice that fills stadiums, so Broadway would be an easy feat. With the pop-punk band’s recent foray into new, eclectic sounds (“Ain’t It Fun” is a far cry from the “Emergency” that made them), we think Williams’ penchant for innovation would do wonders in a play of her own creation.

No offense to the other 5 Seconds Of Summer boys—they’re all so incredibly talented—but we think the crazy-haired Michael might have a secret Musical side. (That’s a capital “M” musical, for those of you keeping track.)

We’re sure the Twenty One Pilots frontman would bring BFF and bandmate Josh Dun with him, but as a concept album, Blurryface is just begging to hit Broadway. The script is already written, guys!

The founding Blink-182 guitarist might not currently be in the band of his making, but that’s okay—he’s out proving aliens exist and writing books, movies and records. Does the dude ever sleep? DeLonge clearly loves to experiment with different art mediums: Broadway seems like the next logical step.

The Good Charlotte brothers come as a packaged deal, obviously, and we’d love to see them take that twin telepathy to New York City. They’re both true music fans, and we think whatever they create would span genre and style.

Fall Out Boy’s Pete Wentz has definitely acted before—why shouldn’t he do so in a play? It’s about time guyliner returns to vogue, anyway…

Machine Gun Kelly is a lot of things: a rapper, a rock star, an AP cover star…but he’s mostly an actor. (Have you even seen him in Roadies?) There’s nothing the guy can’t do, and we think Broadway should be next. Who knows? Maybe when Urie’s over Kinky Boots…

This one was a no-brainer! The New Years Day frontwoman could give Broadway some necessary, authentic edge. A goth musical? Where do we sign up?