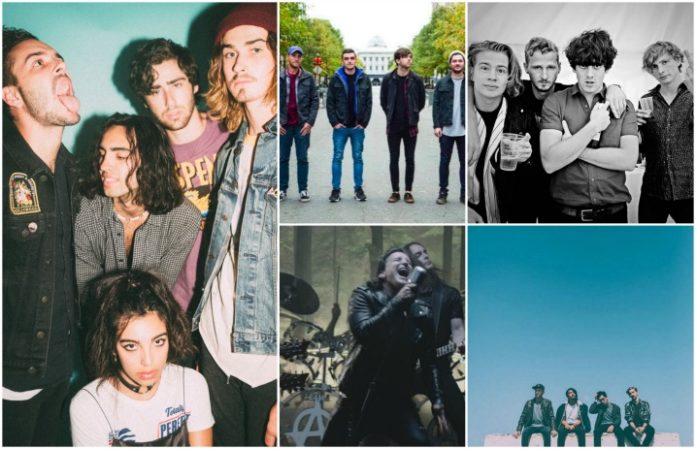 Summer Wars – “Something To Call My Own”

Summer Wars were featured as one of the “12 bands You Need To Know” in an issue last year—and for good reason. Hailing from Raleigh, North Carolina, the up-and-coming pop-punkers display their rich, emo sensibilities on this track, which comes from a split with High Wire.

“Foothold” is the first of two singles from Marigold—the new solo project of Head North drummer Ben Lieber. Marigold will release their debut album, Counterfeit Art, on Feb. 3, and “Foothold” sets it up to be a piece of alternative-indie-emo-rock gold (pun intended) that you’re going to need to get your hands on next week. If that wasn’t convincing enough, Lieber is donating all the sales of the forthcoming album to The Cure Starts Now Foundation, which is a non-profit funding research for curing pediatric brain cancer.

Straight out of Palm Springs, Hungry Hearts are another new band for your radar. The quintet just released the single “Lighthouse,” a heavy alt-rock track with an accompanying video, and are gearing up for a full-length later this year.

Circa Waves – “Fire That Burns”

One of the 11 indie-pop bands that any true pop-punk fan will like, Liverpool, England’s Circa Waves dropped a new track from their forthcoming sophomore album, Different Creatures. It’s obvious Circa Waves are prepared to step up their game on this LP: “Fire That Burns” showcases rich, rock n’ roll instrumentation underneath frontman Kieran Shuddall unmistakeable vocals.

Space Above – “Let It Still”

Space Above is a project from the Naked And Famous producer and keyboardist Aaron Short. “Let Is Still” is the newest single from their forthcoming album, Still—a translucent electro-pop number that features a whole lot of ambient beats intermixed with dreamy vocals with a Japanese House vibe to it all.

Art Of Anarchy – “The Madness”

The Heirs – “What You Want”

Warped Tour alumni and recent Z Entertainment/Sony RAL signees, the Heirs premiered a glittering alt-pop jam this week. “What You Want” screams ‘80s—but feels comfortable in its 2017 time period with its glam-rock meets indie synths feel. Produced by Bram Inscore, who’s credited for work with Troye Sivan and Beck, the Heirs are definitely a group for your radar.

Message To The Masses – “Time To Dance”

Okay, okay—this is not a new song. “Time To Dance” is, of course from Panic! At The Disco’s famed record A Fever You Can’t Sweat Out. However, Artery Recordings’ A Message To The Masses gave this decade-old track new life with their heavy mentality, full of screams and clean vocals.

Rising alt-rock artist Mating Ritual dropped a bouncy, perfect-for-the-weekend track called “American Muscle.” The song celebrates the release of How You Gonna Stop It? Volume 1—the first half of their debut album, which was recorded over a two-year period in apartments, garages and lofts all over Los Angeles County.

Featuring members from quite literally all around the world, Night Lights are an indie/pop rock band that integrate feel-good vocals with a Cruisr-esque vibe to their melodies. “Felicity” spotlights Night Lights’ easy-to-sing-along choruses.