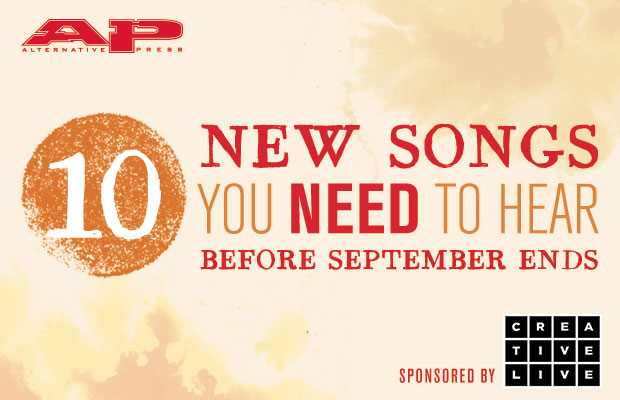 Sometimes the rock world can get noisy, and we don’t just mean in decibels or fuzz. Often the signal-to-noise ratio is more noise than signal. But no worries: We read, listen to and watch everything so we can sort it for you. Here are some of our favorite new songs and videos of September 2014.

THE AMERICAN SCENE – “Nails Of Love”

“Nails Of Love” starts off with a bit of a moody Balance And Composure vibe with a hint of dance punk, and you're not sure exactly where it is gonna go—but then it gets to the 48-second mark and the best chorus of 2014 kicks in. “She doesn't wanna be in love/Doesn't think it's any fun/All her friends are getting high on the weekends,” frontman Matt Vincent relays. “He doesn't dance unless he's drinking/But he's been breaking it down, breaking it down.” This chorus repeats five times in three minutes and 46 seconds, which almost seems like overkill, until you realize just how infectious it is. Honestly, there's not much to this song besides that chorus, but again—that chorus. —Scott Heisel

AT THE GATES – “At War With Reality”

The triumphant return of Sweden’s best: Melodeath legends At The Gates made a smart choice in selecting “At War With Reality” as their first single in 19 years. Tomas Lindberg sounds as fierce as ever, and the soundscape is pure, thrash-heavy riffage. It literally sounds exactly like something off 1995’s Slaughter Of The Soul, which may leave some feeling a bit underwhelmed, longing for growth and experimentation. But the track will bode well for the longtime core fans easily upset by change. It was a conservative move, but it just leaves you more curious for the album. —Matt Crane

On their latest studio album, Badlands, Colossus manage to hone their mature breed of metallic hardcore into something entirely unparalleled by their genre counterparts. On “Worthless,” the group dance around outside of their comfort zone and manage to formulate something truly unique. From the track’s blistering pace and unforgettable chorus to its positive message and concluding guitar solo that actually doesn’t feel out of place, it is truly enlightening how refreshing “Worthless” is. Take the time and give the song a listen—it may just restore your faith in heavy music. —Tyler Sharp

FOREVER CAME CALLING – “Mapping With A Sense Of Direction”

The future of pop-punk belongs to those who can manage to break its current mold and stray away from the clichés that are constantly plaguing the genre—and Forever Came Calling are doing exactly that. Case in point: the band’s second single from their upcoming album, What Matters Most, “Mapping With A Sense Of Direction.” From everything down to the chord progressions and accented snare tone, the track is a beacon of light in a genre that’s becoming clouded with lackluster offerings. Give “Mapping” just one listen and this writer is sure you’ll be encapsulated by its unforgettable chorus and driving instrumentals. Forever Came Calling are on to something with What Matters Most, and pop-punk is going to be a better place because of it. —Tyler Sharp

The intro to this song was the soundtrack to the minute-long video teaser announcing the release date for Hesitant Alien, the solo debut from the former My Chemical Romance lead singer and perpetual conceptualist. The menacing guitar chugging and the urgent rhythm revealed something that wasn’t quite noise rock, not quite metal, yet totally worthy to be playing while you’re speeding on the country’s highways to evade law enforcement officials. It’s the album’s most unhinged moment, with Way intoning non sequiturs (even namechecking a member of Black Flag) buried in the mix, all the while sounding like he’s at the end of his tether with nothing to show you, save a whole lot of demons and a really big knife. Put it on your playlists with MCR’s “Make Room!!!!,” the Jesus Lizard’s “Boilermaker” and David Bowie’s “It’s No Game (Part 1).” —Jason Pettigrew

When Death Cab For Cutie's Ben Gibbard and DNTEL aka Jimmy Tamborello started a little project, nobody would have predicted the resulting album, the Postal Service's Give Up, would eventually sell more than one million copies. Like the Postal Service's solitary full-length, Matty Mullins’ debut solo album was recorded with a similar lack of fanfare and commercial expectations, but these songs could blow things wide open for the Memphis May Fire singer. Like the rest of the album, “Come Alive” is a collaboration between Mullins and longtime MMF producer Cameron Mizell (Sleeping With Sirens, the Word Alive). In the song, Mullins compares himself to the “rest of the walking dead,” a reference not so much to the zombie comic-turned-TV show as to the state of people whose spiritual life is nearly null and void. With an almost EDM-like hum, loud, programmed drums and Mullins’ earnest croon, “Come Alive” does exactly that when the chorus hits. Plus, there's a guitar solo! —Ryan J. Downey

Late last year, Sleepwave—the new vehicle of Spencer Chamberlain and Stephen Bowman—debuted with “Rock And Roll Is Dead And So Am I,” a furious rocker with weight and heft that completely negated its fatalistic title. While that track is still a highlight from Sleepwave’s debut album, Broken Compass, it’s “The Wolf” that raises the power sweepstakes even further for the band. It’s a great distillation of the band’s strengths, parlaying rapid-pulse riffing and widescreen, anthemic choruses. On the basis of this track alone, Chamberlain and Bowman should be getting a call from Josh Homme to open the next Queens Of The Stone Age touring campaign. But even if the universe isn’t fair, “The Wolf” is still a paint-peeler of a track. —Jason Pettigrew

Originally released in Australia in 2013, Violent Soho's new album, Hungry Ghost, is getting the U.S. reissue treatment from the fine folks at SideOneDummy, and if you ask me, they have a serious winner on their hands. As someone whose formative years lined up with the last time mainstream music was actually pretty awesome (also known as the mid-'90s), hearing this song takes me back to the nights I would sit in my bedroom with my Walkman next to my clock radio, waiting for that new, awesome rock song to come on so I could dub it to my killer mix tape already in progress (and then getting bummed out when I accidentally recorded, like, a Hootie And The Blowfish track by accident or something). The feeling I got when I captured those magical three-and-a-half minutes when I was 12 is the same feeling I get 20 years later when I listen to this song. Hell fuck yeah, indeed. —Scott Heisel

London and Seattle get all the press when it comes to rainy days, but Portland has their fair share of gloom, too. Atmosphere, sludge, groove, a bottomless well of deep “feel” and a bright hot production from Billy Anderson (Red House Painters, Mr. Bungle, Sleep) give Witch Mountain an advantage over the doom metal pack. Due on the last day of this month, Mobile Of Angels is the band's last with frontwoman Uta Plotkin, whose vocals are rich and soulful without sounding overwrought or comically operatic. There are few better showcases for what band co-founders Rob Wrong (guitar) and Nate Carson (drums), newish bassist Charles Thomas and the recently exited Plotkin can do than “Your Corrupt Ways (Sour The Hymn),” which evokes the full spectrum of doom-metal emotion in its delicious 10-and-a-half-minute running time (which is to say, it's varied, but it ain't ever happy). Pour some coffee, crank the speakers, and doom on with Witch Mountain. —Ryan J. Downey

“I wanna take this crown from my head/I wanna build something with my hands,” Ryan Key croons on the new Yellowcard song that sounds nothing like a Yellowcard song. On “Transmission Home,” the band switch from slow, crunchy riffs to an uplifting, thumping chorus that feels very atmospheric (you can actually picture clouds as Key sings, “I will find a transmission home”). The lyrics sound very soul-searching: “I wanna wipe these stars from my eyes/I wanna search and see what I find.” —Matt Crane

This article is brought to you by CreativeLive.