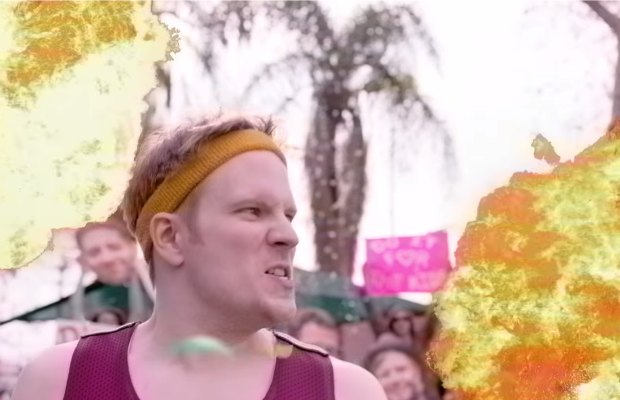 Sometimes the rock world can get noisy, and we don’t just mean in decibels or fuzz. Often the signal-to-noise ratio is more noise than signal. But no worries: We read, listen to and watch everything so we can sort it for you. Here are some of our favorite new songs and videos of February 2015.

Fall Out Boy leave behind the victorious gladiator trope they played up on their video for “Centuries” with their hilarious new video. “Irresistible,” in deep contrast, scores footage of the guys being 900 percent stomped in comically mismatched basketball game as a group of ragtag fans cheer their every failing, aided by graphics of explosions and signs proclaiming A+ encouragement such as “Not bad, Joe”. The most laugh-out-loud part for FOB fans, however? Probably when they give a cheeky nod to their Young Blood Chronicles video series with vocalist Patrick Stump losing his artificial hand (see: “Why is Pete so nonchalant about that severed hand on his doorstep?”). Thnks fr th lolz. —Cassie Whitt

Falling In Reverse frontman Ronnie Radke has a devoted following, but it’s impossible to scroll past an FIR news story without seeing quite a few demeaning comments aimed at the guy. Hell, a few of those comments will probably pop up under this very article! Those who spread the negativity and call out Radke as an “asshole” can take it easy this time because the frontman has saved you the trouble. The hilarious “Just Like You” video embraces his haters within seconds with “I am aware that I am an asshole/I really don't care about all of that, though.” The clip parodies the Voice and American Idol; Radke plays not only the contestant but the judges—and his Steven Tyler is spot on. The video also features Telle Smith, Danny Worsnop and even Andy Dick. Whether you love them or hate them, the video is in on the joke. —Nick Major

Metz have never taken themselves too seriously. Despite unleashing some of most critically lauded post-hardcore of recent years (what up Polaris Prize nomination!), they maintain an off kilter sense of humor, one they showed again when they released their so-called “not the video” er…music video for single “Acetate.” This is dry, surreal comedy. They don’t do gross-outs or music videos that feature dick shots. They do make pancakes out of steel skulls, 12-sided die and medical marijuana. Boasting pummeling guitar lines and rigor-mortis tight howls that skirt the edge of full-blown screaming, “Acetate” boasts even more taut greatness from these precision noise-rockers. Expect more on the aptly named Metz II, out May 15. —Lee McKinstry

I may not have been alive in 1985, but if Passion Pit's “Lifted Up (1985)” is any indication of what life was like back then, I sure wish I was. The track rides from valley-low verses that methodically build their way up to a crescendo mountain-top chorus, effortlessly lodging itself in your head for the rest of forever. As Passion Pit brainiac Michael Angelakos croons, “1985 was a good year/The sky broke apart and you appeared,” over a melodious multitude of soaring synthesizers and heavenly harmonies, you may find yourself wondering how the track isn't No. 1 everywhere in the world—I'm scratching my head over it, too. —Tyler Sharp

The Maine have written the best Third Eye Blind song they never wrote. On “English Girls” the Arizona quintet boast an exuberant bounce not heard on the gloomy vent-session that was Forever Halloween. “English Girls, they just like sex,” John O'Callaghan sings over soaring, ’90s guitars. “American boys, they do too.” If this track is any indication, it looks like we’ll be seeing a much happier Maine on their upcoming album, American Candy.—Matt Crane

NATE RUESS – “Nothing Without Love”

To call fun. frontman Nate Ruess's first solo foray into the spotlight hotly, righteously, undeniably, rabidly anticipated would be an understatement. And, while many fans were hoping for a proper followup to fun.'s smash 2012 effort, Some Nights, or, even something new from Nate's old group the Format, his solo debut, “Nothing Without Love,” still manages to satisfy. Produced by Jeff Bhasker and Emile Haynie (who both worked on Some Nights), the single features Red Hot Chili Peppers' Josh Klinghoffer on guitar and background vocals from Lykke Li. Highlighting Ruess's strengths as a writer and vocalist, “Nothing Without Love” builds from a ballad-esque start into a powerful, catchy, melodic gut-punch laced with emotionally charged and extraordinarily personal lyrics. It's not a far cry from Nate's past work, but it's a logical next step, and this strong start helps make his forthcoming solo debut all the more alluring. —Philip Obenschain

I think it was Joan Of Arc who said, “Is it just me, or is it hot in here?” Now that you've picked yourself up off the floor from laughing too hard, I want to ask you if you think this track from the mighty Retox's latest album, Beneath California, is positively commercial. At over three minutes, the track is practically opus length compared to the amount of songs they have that clock in under a minute. Maybe it's because the song sounds more regimented in its attack, where previous songs sounded like they were held together solely by centrifugal force. Perhaps its Justin Pearson's uncanny sing-speak prowess that makes things feel as direct as the tip of a glock resting on your forehead. Either way, “Let's Not Keep In Touch”—as well as the entirety of Beneath California—is proof positive hardcore continues to evolve in grand mutations. But I still think it could fit on commercial radio playlists, if said stations weren't manned by soulless chicken shits in the first place. —Jason Pettigrew

With all this hubbub surrounding Title Fight's Hyperview lately, may I interest you in some shoegaze OGs who are back in the game? They would be UK's Swervedriver, who are releasing their first album in a whopping 17 years next month, I Wasn't Born To Lose You. Their model of British alt-rock overlaps into shoegaze territory, like when Adam Franklin's vocals graze atop the dreamier guitar layers. The bloated and busied bridge just perpetuates their will to rock out when needed (not as much as 1993's prized Mezcal Head, but still!). —Brian Kraus

Legendary British art-punks Wire dropped this track from their impending self-titled album this month. “Joust & Jostle” is both propulsive and melodic enough to appeal to fans who dug 2011's dialed-down Red Barked Tree, while offering a smidgen of the texture that coursed through 2013's Change Becomes Us. Too arty and affected to appeal to mainstream tastes, but still pointed enough to outshine the bulk of American-made indie-rock, “Joust & Jostle” is a good document in the canon of a long-running act whose work is always worthy of attention. —Jason Pettigrew

TAKING BACK SUNDAY – “How I Met Your Mother”

For their Happiness Is reboot, The Complete Recordings, Taking Back Sunday added three songs (“How I Met Your Mother,” “This Is Happening” and “Can You Feel That (Here I Am)”) as well as three acoustic renditions (of “Stood A Chance,” “Better Homes And Gardens” and “Like You Do”). Of the bonus material, “How I Met Your Mother” is hands-down the rowdiest, taking a raucous page from proto-punk to drum up a little youthful rebellion in a captured moment in time: “Closed fist you hit me square in the jaw/Said I'm a woman and I know what I want/Let’s not grow old or act our age/Keep singing songs like nothings changed.” —Cassie Whitt