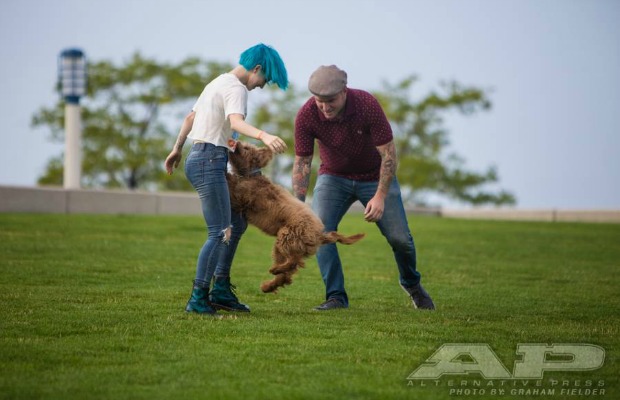 There were so many little moments that made the APMAs special last year. Fom “Thanks, Pete” to Oli Sykes’ brave speech about addiction and Andy Biersack’s gifting his award to a fan, many of them were caught on camera by our friends at AXS TV. But, beyond the range of the stream, there were other details that added to the magic.

Here are just a few of our favorites:

Hayley Williams and Chad Gilbert brought their dog to rehearsals

Hayley Williams brought a very special guest to the APMAs rehearsals the day before the show—Alf, her puppy. She and Chad Gilbert took to the back lawn of the venue for a play session as soundcheck ensued.

Fun fact: This famous photo of Sleeping With Sirens and Pierce The Veil was taken at the APMAs

The promo image taken by photographer Adam Elmakias for Sleeping With Sirens and Pierce The Veil’s co-headlining World Tour was taken backstage at the APMAs during the show.

Backstage catering the day of the show was provided by Lakewood, Ohio’s Streat Burger And Bistro, and apparently Oli Sykes was super-into it. If you’re coming to the APMAs this year and want to see what he was on about, well…you can’t. The editors called up Streat today and found that they recently closed. Looks like Oli’s first Streat sandwich was his last.

During rehearsals, the Misfits asked Mrs. Biersack what her favorite Misfits song was and she replied “Saturday Night.” Andy and the band proceeded to serenade her for a private concert. Unfortunately, we don't have a video of that, but here's this clip of them performing “Die, Die My Darling” on rehearsal day!

He was “quite enamored” by their performance, we’re told.

Falling In Reverse had never played “Gangsta’s Paradise” live, nor had they rehearsed with Coolio and Tyler Carter of Issues before the show.

The Contemporary Youth Orchestra learned all that music in three days

Joan Jett was upset to be rushed up for her Icon award, as she was trying to get a backstage selfie with Ice-T

Understandable. He had his two bulldogs with him and everything. So many sweet photo-ops.