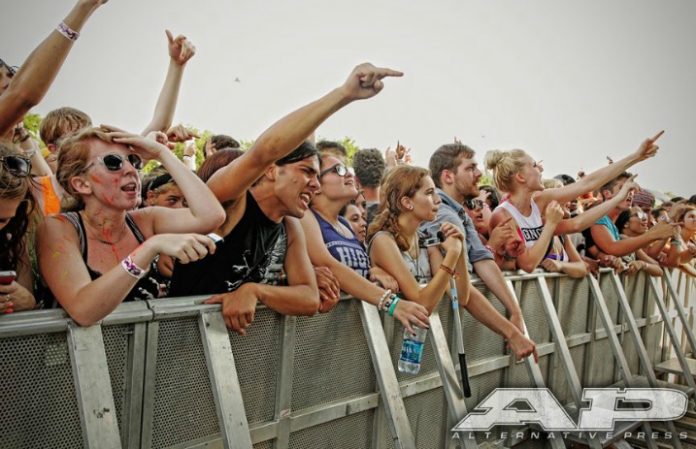 This year, the Vans Warped Tour is turning over a new leaf. By eliminating extraneous features and focusing on purely music and outreach, founder Kevin Lyman and co. are bringing the two-decades-plus tour back to its roots, ushering in new generations of both conscientious bands and empowered fans alike. So with that in mind, here are 10 reasons to get excited for Warped 2016.

“This year’s tour is really about bringing it back to basics. It’s just about simplifying,” Lyman said at the lineup announcement webcast. “I think we were trying to become something for everybody, but we’re going to [now] focus on the three things that we’re about.” After a trying summer 2015, it seems Lyman wants to revitalize and refresh the tour by, almost paradoxically, looking back to how it all started.

A pivotal facet of this year’s theme is cutting off peripheral features of the tour, like the comedy, YouTuber and acoustic tents. By doing so, time, energy and resources will funnel into the most important cornerstone of Warped: the music. Says Lyman, “[That’s] what got us here.”

While nonprofits have always been a key aspect of the tour’s landscape, Warped 2016 will emphasize empowering fans through outreach. Lyman is listening to ideas coming directly from fans themselves. Case in point: One fan reached out to Lyman with his idea on Twitter, and now he’s organizing a clothing drive at the last stop of the tour to donate to a homeless shelter. Warped is also partnering with abuse-awareness charity A Voice For The Innocent to create a high-visibility plan for this summer.

The third cornerstone of Warped 2016, Lyman says, is educating younger bands on how to tour by mixing them with experienced bands. This intersects with the “Back To Basics” theme, as well: Many classic bands, like Less Than Jake, Reel Big Fish, Good Charlotte and Sum 41, are joining this year’s lineup, making Warped 2016 feel like a flashback to the tour’s early days.

While we do have a wave of classic bands on Warped 2016, this year is also welcoming its fair share of newbies. Up-and-comers like Wage War, With Confidence, Waterparks, Cane Hill, Dash|Ten and ROAM will be hitting the road with Warped for the first time this summer, showcasing some of the best new blood in the scene.

Okay, we have classic bands, we have new bands. But you know what makes this year’s Warped lineup so great? It’s the buffer between those two groups: the fan favorites—bands who haven’t spanned decades of the tour like Less Than Jake, but who still have done their fair share of summers. Need examples? Check out Real Friends, Set It Off, State Champs, the Maine, Sleeping With Sirens, Mayday Parade, Knuckle Puck, Tonight Alive, the Summer Set and 3OH!3.

Many of the bands on this year’s tour are quite familiar with each other. “I'm just really excited because it seems like most of the bands we've toured with last year are on it, so it's going to be really fun,” says Real Friends bassist Kyle Fasel. Less Than Jake bassist Roger Lima echoed the sentiment, noting that year’s tour feels like a community since they’re with, in his words, the band’s “bestest friends.” Why is this exciting? Well, with band love comes the possibility for onstage collabs, tons of awesome Instagram photos and even the occasional tour prank. Keep your phones charged, punkers.

Like the rest of the tour, Warped’s stages have been completely revamped this year. Because the heavy contingent couldn’t be contained to one stage, 2016 will feature the Monster Energy Party Zone, where the hard stuff will reside. Journeys has taken over the main stages, splitting them between left and right feet. The Full Sail stage has taken a hint from its university sponsor and, in the spirit of education, they’ll be schoolin’ you on the tour’s newest acts.

Many of the names on this year’s tour are releasing new albums right before the start of the summer. Get ready to hear (and see) new music from Good Charlotte, Real Friends, 3OH!3, I See Stars and Issues come to life onstage.

10. ALL THE FEELS—AND TWICE THE FUN

Kevin Lyman is eager to get the summer’s most famous tour back on track by simply doing great things for the scene. Lyman also mentioned that he’s educated himself since last summer’s events. “I’m going to go out, and I’m going to have fun. I didn’t have any fun last summer,” Lyman said. “I got in this business, I worked really hard—I think everyone knows my work ethic. I work really hard, but it’s still about having fun. I have a lot of other businesses, but the Warped Tour is in my heart. It changed the way people tour. I think it’s changed our business.”