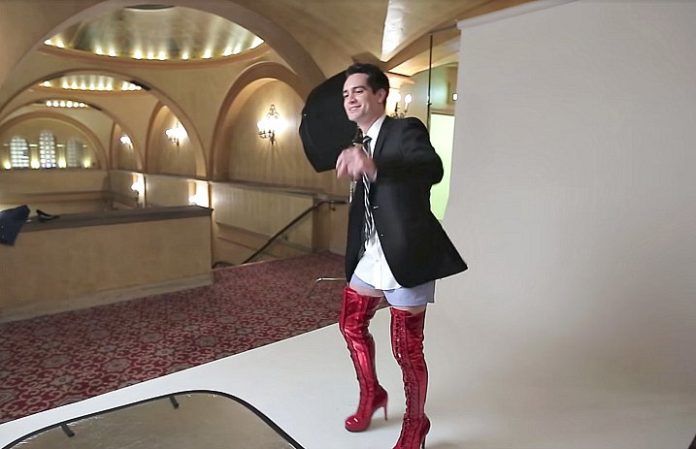 Brendon Urie of Panic! At The Disco kicked off his stint as Charlie Price in Kinky Boots this weekend, and his stellar performance is one you absolutely cannot miss.

Panic fans filled the Al Hirschfeld Theatre in New York City for Urie’s opening night on Friday, May 26. When the show began, Urie had to take an extended pause before completing his first line of dialogue to let the eruption of celebratory applause and excitable shrills from the audience die down. The show ended with a massive, and absolutely deserved, standing ovation at curtain call.

Urie has always been theatrical, but his role as Charlie Price proves he can totally slay as a rock band frontman and a leading Broadway star. Did any of us really doubt it, though?

Here are some reasons why you need to attend Kinky Boots during Urie’s run:

1. The production and cast are phenomenal
Before gushing about the show’s new lead star, it is important to note that the show is absolutely fantastic. From the incredibly talented cast to the gorgeous costumes, you won’t stop being wildly impressed. Each scene, song and dance number will blow you away. One minute you’ll be crying of laughter and the next you will be hit right in the sad, tear-jerker feels; but you will leave feeling empowered, inspired and compassionate.

Looks like he can make those high heels work! ✨��✨ Panic! At The Disco's Brendon Urie joins #KinkyBoots on Broadway on May 26! (��: @PanicAtTheDisco)

Oh yes, as seen in the Broadway show promotional photos and signage, he slips into the signature red Kinky Boots during the show and successfully dances in the heeled shoes at the end of the second act. Urie told the New York Post that wearing the boots actually feels pretty natural because he used to wear his little sister’s dress-up heels at the age of 10, so he’s had some practice. We are living for it.

3. Brendon Urie with a British accent

I’m not sure any of us were properly prepared for this, as I heard muffled gasps and comments such as, “Oh my God, he’s doing an accent, I’m dying,” excitedly, but quietly, mumbled from audience members sitting around me. For a preview, listen to Urie talk about prepping his British accent and working with a dialect coach for the show—in the video above.

4. You will still enjoy the show even if you are not a Broadway buff or musical theater fan
If you are interested in seeing the show, but aren’t well versed in The Great White Way, you should still totally go. Just be sure to act appropriately while in the theater (i.e., it’s not a Panic! At The Disco concert, so pictures/videos during the show are absolutely not allowed, and screaming every time Urie does anything is distracting and disrespectful to both the cast members and the audience).

5. You will like it even if you are not a fan of Brendon Urie or Panic! At The Disco
The people sitting next to me during Urie’s opening night purchased tickets to the show way before his role was announced and had no idea who he was. Their verdict after his performance: He was fantastic and if they didn’t know from the onslaught of P!ATD merch-wearing fans surrounding them and the pre-show hype, they would’ve just thought he was another talented Broadway actor.

6. The show has a beautiful message
At one point in the show, you will actually hate Urie—well, not really him, but his character Charlie and his staff for their lack of compassion and understanding toward Lola, Charlie’s drag queen friend and designated shoe designer. Kinky Boots showcases acceptance and celebrates being yourself. The main takeaway: Accept yourself and accept other people for who they are.

7. You might get to meet the cast—yes, including Urie
Get your Playbill signed and take selfies with the extremely talented cast after the show at the stage door. It has been confirmed that Urie will not be coming out to the stage door after matinee shows to sign playbills and take photos, only after night shows, so plan accordingly. The official Panic! At The Disco Twitter released a statement asking audience members to stay for the entirety of the show and not leave early during the second act to get to the stage door before everyone else (another tip to add to theater etiquette list).

Please don't run out of the theatre before the play is over. Let the cast take their bows. We aren't rushing out so neither should you.

8. It is an excuse for a vacay, or day trip, to New York City
Need a quick getaway or a destination birthday trip idea? While Urie is in Kinky Boots from May 26 to Aug. 6, you can enjoy the warm summer weather in New York City by walking Central Park, shopping in SoHo and dining at the fabulous restaurants right around the corner from the Al Hirschfeld Theatre on Restaurant Row.

9. Kinky Boots can fill your P!ATD void
Sadly, your summer schedule will not include a Panic concert this year, as the band is not touring while Urie is on Broadway, but a trip to Kinky Boots could totally be your fix. After all, you’ll be surrounded by fellow fans (watch: fans singing “This Is Gospel” at the stage door), get to purchase an exclusive Panic x Kinky Boots collab tee, and support Brendon during his B’way debut.

10. You deserve to go
The world is in a weird place right now, but you can escape the mess by getting lost in the magic of a Broadway show. The powerful message and feel-good entertainment of Kinky Boots will be refreshing and good for the soul, trust us. Now go buy your tickets.