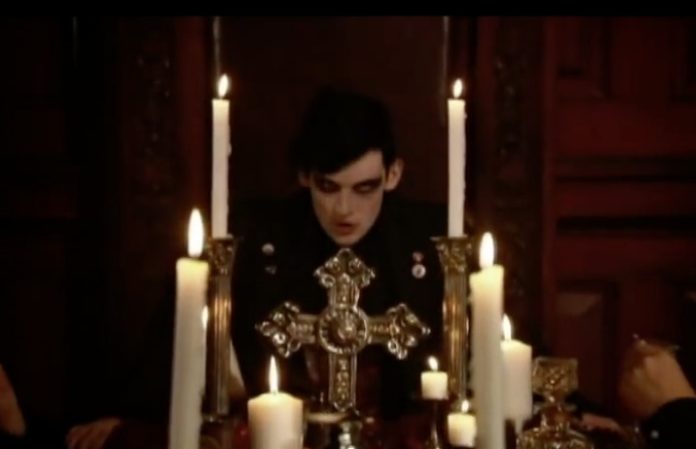 Whether you're a vocal vampire person or you instead choose to keep your undying love under wraps, these ten songs are the ideal soundtrack to anyone's obsession for supernatural bloodsuckers.

Take a scroll through our vampire playlist below, and let us know which track is your favorite in the comments.

Less than a minute and a half in length, this song is the chaotic killer every vampire lover needs to kick off their playlist. “Entwined inside the fire/Beckoning restless desire/I cannot let go of the supernatural” are the perfect lyrics to spark your scary obsession.

“A Vampire’s Lament” by Atreyu

As a rule, throwback Atreyu is always the perfect soundtrack for your vampire fantasies.  Hell, “Her Portrait In Black” was even on the actual soundtrack for Underworld: Evolution. Lyrically, “A Vampire’s Lament” describes the conflicting emotions that can come with feeding off of the living: “But the taste for fresh blood pushes me on…”

“The Demon Inside Me” by Vampires Everywhere

This band just had to appear on this list by virtue (or lack thereof) of their name. This song is an energetic rock track that will get everyone’s motor running. It reminds us that vampires aren’t just spooky, they’re damn sexy, too.

“The Last Sunrise” by Aiden

If we were playing a word association game and someone said “vampires,” I would immediately, without hesitation, respond with “Aiden.” “The Last Sunrise” is the anthem that everyone knows this band by, and rightly so. The song’s signature riff is enough to keep you hooked, but the opening lyrics are ones that you’ll never forget: “Bite the blood that drains the life inside of me/And fills your soul with love and hate/And all those things you need to breathe.”

“Vampires Will Never Hurt You” by My Chemical Romance

This one is from another band whose breakup we’re still not over. This really early MCR track is probably one of the worst quality recordings you’ll ever hear, but that’s kind of what makes it so great. Even when their sound setup was shit, this band had some serious raw talent for songwriting and creating a creepy atmosphere.