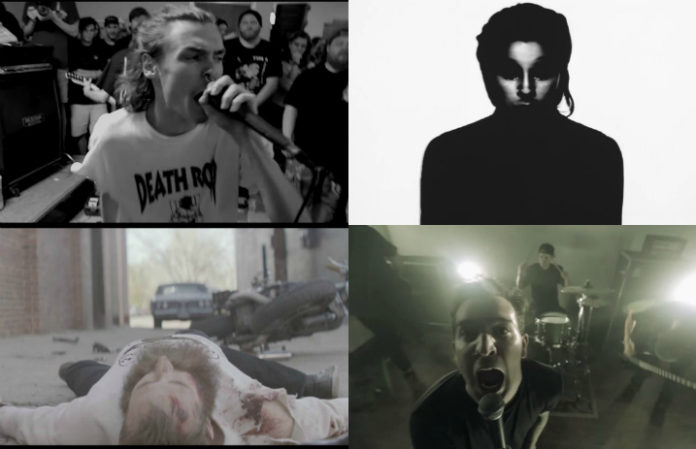 From hardcore to metalcore to dark alt pop, the alternative music scene is filled with musicians who turn their qualms with religion into pit-spinning bangers. To be clear, though, most of the time it’s not the religion that these band members have a problem with, but the way it is wielded. Those of us who like to wear black clothes, tattoos and piercings, and those of us who have certain sexual preferences and so on, often get verbally and even physically attacked by religious adherents for a particular way of life. So, if you’ve ever been pissed off by the hypocrisy, the fear-mongering and even the sadistic tendencies of some spheres of religion, we’ve got some songs for you.

“The Gospel” by Knocked Loose

There is absolutely nothing like a Knocked Loose show, mostly due to the fact that there is no band quite like Knocked Loose. Similar sounds can be found in hardcore, but there is no attitude or commanding presence that compares to that of this Kentucky-based band. Spitting lines like, “I like the way you stand with God when you're too afraid,” KL certainly aren’t afraid to stand up to the Bible Belt and point out its failings. In case he wasn’t being clear enough, vocalist Bryan Garris puts it bluntly with the line, “I don't want to be a member of your fucking church.”

“The Divine Infection” by Motionless In White

Of course, there can’t be a list for the blasphemer without including the very outspoken Motionless In White. Since the band’s inception, they have made it a point to let the world know how much they despise religion and some of its most problematic followers—like priests who sexually abuse children. On “The Divine Infection,” Chris Motionless stops singing and screaming to go on a rant of his own, speaking directly to the issue of religion: “Almost every major issue I see that faces opposition in the world today is a product of religious bigotry or criminal intent in the name of God. Who the fuck are you to tell me what I can and can't do or say? No thanks, fuck you.”

Hailing from South Carolina, Hundredth are a band that found themselves caught in the middle of this religious debate. At first, they grew up believing in the religion that they had been told to follow. But as we find in the song “Delusion,” they ultimately were able to leave that life behind them. “I freed myself of your divine delusion,” vocalist Chadwick Johnson gruffly sings. And he seems to be happier for it.

“The Rapture” by Senses Fail

Senses Fail’s Buddy Nielsen is another figure in the scene that has been open about his struggles with faith. He, too, was raised to believe in the Bible, but as countless Senses Fail songs will tell us, life experience makes the religion less satisfying and convincing. “I buried my cross with a rose,” he declares in “The Rapture.”

The three-piece alt-pop group touch on spiritual issues with their appropriately (and ironically) titled song “Holy.” Vocalist Lynn Gunn uses lines like, “But there’s no way that there’s weight in the words that you preach/When you’re claiming your faith and you contradict your speech,” to call out someone who entangles religion with a lifestyle of hypocrisy.

If the lyrics “I don’t need you to save me/I am the wicked” weren’t enough to clue you in to My Enemies & I’s true feelings, the music video for “Reborn” should help put two and two together. Set inside a church, vocalist Jeff Hill performs a sermon and a few twisted baptisms of his own. These guys have simply had enough of being told they need divine assistance.

This single from Vanna’s latest record All Hell literally personifies Death. He dresses up in a nice dark suit, he’s got an eye on his watch and he’s coming after you. Death, speaking through the voice of Davey Muise, says, “I’ve walked with the devil/I spoke with God/They don’t care if you’re miserable.” Pretty grim, indeed.

If there is one kid that got burned by religion growing up, it was Cane Hill vocalist Elijah Witt. At least half of the band’s subject matter deals with religion and the negative effects it has on society and the individual. In “Sunday School,” Witt talks about how his family looks down on him for not being religious like them. His answer? “Keep your faith if you want/Keep your brace if you want/I’ll just fuck up and fuck up again.”

“Heaven Is A Memory” by Old Wounds

Everything you need to know about this one is in the lyrics. From start to finish, “Heaven Is A Memory” slams religious faith in favor of the here and now. Ex-vocalist Kevin Iavaroni opens the track with the advice, “Liberate yourself from false ideals.” As for himself? He’s no longer with the band, but at the end of this particular song he simply says, “I’ll take my chance in Hell.”

“Crooked Young” by Bring Me The Horizon

Bring Me The Horizon’s last metalcore record, Sempiternal, had a lot to say about the dysfunction of modern society. One of the topics addressed on that album was religion. Sneering and mocking, Oli Sykes screams, “It's a miracle/I'll be born again/With the Lord as my shepherd/I will find a way!” He then seriously adds, “Fuck your faith/No one’s gonna save you.” Well, no one said sinners were shy!