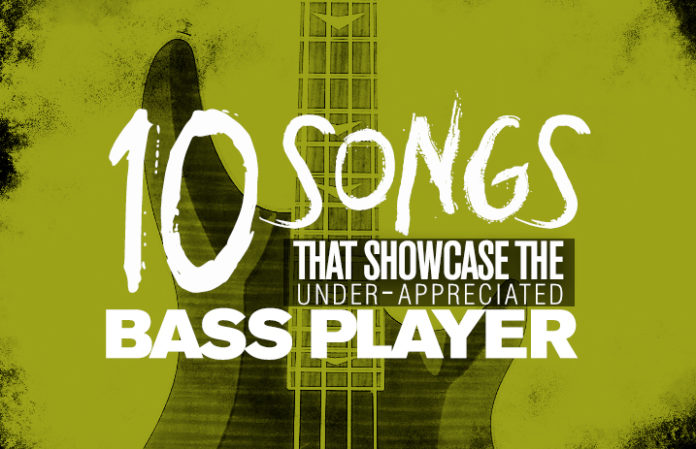 Guitar Hero II quipped that a mini fridge is more important than a bassist. And while it is true that many people undervalue the role a bass guitar plays, it’s hugely important in providing a sturdy backbone to almost any song, giving it a fuller, more intense sound. (Not to mention that the drummer naturally relies on the bassist to keep time and help establish rhythm.) So here are some songs that showcase the bass, whether it be for just a few brief shining moments or the entire track.

Sadly this band’s glory days are over, but Kill Hannah’s one-of-a-kind alternative, ethereal sound is without question driven by the bass in “The Chase.” The intro bass line is what guides the rest of the track through charging verses all the way to its determined end.

These self-described “soul punx aren’t afraid of the bass. While they have a new record, If I’m The Devil…, on the horizon, their previous record, The Blackest Beautiful, shouldn’t be forgotten. The bass clearly stands on its own in this song while providing support to the unique drum beats and hefty breakdown.

Joyce Manor are really good at making emo songs sound just as bouncy as they are self-deprecating. “Heart Tattoo” has fun pop punk-tinged vocals and guitars that spring from the quick, rumbling bass underneath. We just wish this song were longer so we could hear more of it.

My Chemical Romance – “The Sharpest Lives”

We know everyone’s still upset by MCR’s breakup and we should probably all be sent to group therapy for how seriously this bums us out, but there’s nothing wrong with repping “The Sharpest Lives” like it’s 2006 and you just bought your copy of The Black Parade. This one starts out with the kind of bass that makes you think your CD player might be broken. (Yes, CD player. They still exist.)

Being the progressive metal band that they are, Periphery are adept at showcasing all of their instruments equally. Even when the guitars are wailing, you can still hear the distinguished bass. This track comes off of their latest double album, Juggernaut: Alpha & Omega. The monstrous work covers about 80 minutes of storytelling, and “22 Faces” stands out as some of the best.

“The Path” opens with a bassline that sounds like it’s being passed through a broken amplifier—but the effect gives the song its character. Throughout the whole track, this fuzzy, crunchy bass continues to string everything together, and it wouldn’t be the same otherwise.

The Ghost Inside – “Avalanche”

This song takes a cool structural approach that mimics the spirit of its title. First comes the steady strumming of the guitar. Then the vocals are layered over, and the drum brings in a simple, matching beat. All of the instruments build on top of each other until the bass gets its own little isolated riff that ushers in the rest of the song’s coming avalanche. (“You build, build/ Now we’re caught in the avalanche…”)

Cane Hill are nü metal meets metalcore, and the leading track off of their debut self-titled EP shows you how. It gets a little weird, but it’s the kind of weird that grabs you by the collar and shakes your brains loose until you play it again. The bass supports the low-tuned guitars in “OxBlood” but also stands out in its own right, especially when the creepy voices chime in at the 1:30 mark.

The Plot In You – “Living Your Dream”

No solos here, but the bass guides the guitar parts for the whole song and is definitely a huge part of what gives “Living Your Dream” its weight. For good reason, this song’s bass levels are turned up loud.

Like Cane Hill and The Plot In You, Sworn In use their bass to anchor the song in a demonically low, unsettling vibe. The bass in “Mindless” crawls through your ears like a spider. It’ll make you cringe, but that’s pretty much the point.