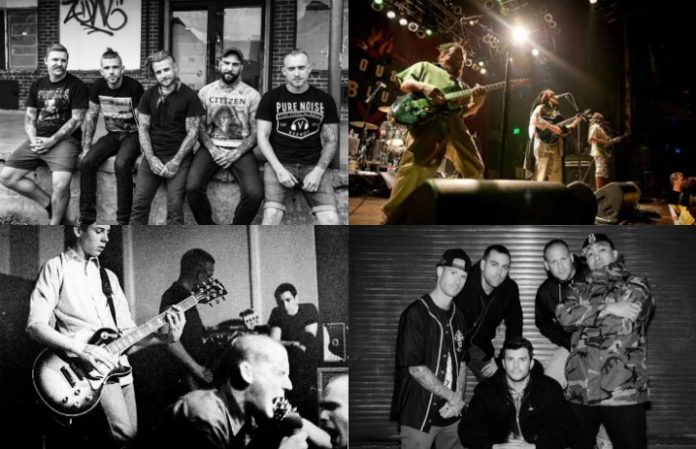 While New York and London may have claims to the origins of punk, California and D.C. get to claim hardcore. Hardcore is a style of music that has had various defining characteristics since it first started popping up in the music sphere in the late 1970s and early 1980s. Naturally, hardcore from the ’80s varies greatly from hardcore of today—just compare Dead Kennedys to bands like Defeater. Regardless, it’s an important genre of music that might be slightly difficult to get into at first. From screeching vocals to short outbursts of hard hitting, rhythm-centric music, it’s definitely a trip worth taking. Here are a few key tracks to help anyone get into hardcore.

“I Don’t Want To Hear It” by Minor Threat

Minor Threat is a major pioneer of D.C. hardcore. Vocalist Ian MacKaye is the figurehead of the straight-edge movement (whether he likes it or not) and used his record label, Dischord Records, to help pave the way for an edgier DIY outlet. “I Don’t Want To Hear It” is straightforward, short and slightly less abrasive than some of Minor Threat’s other classic tracks, making it a great intro to the genre.

The world has the Bad Brains to thank for popularizing PMA in the modern music scene. That’s “Positive Mental Attitude,” which has been a fighting motto at the heart of hardcore. Bad Brains definitely encompass more of a modern day punk-fusion vibe, but they were giants during the hardcore movement in D.C., just like Minor Threat.

“Rise Above” by Black Flag

Henry Rollins is another titan in the hardcore-punk scene of the ’80s. As the fourth lead vocalist for Black Flag, Rollins is the most recognizable and helped shape the band as it is known today. With simple lyrics and a flatly spoken message, “Rise Above” embodies the key characteristics of hardcore.

“Can We Start Again?” by Bane

Bane came about in the mid-’90s but dropped most of their full-lengths in the early 2000s. Closing out their legacy earlier this month (they played their final show June 18), Bane is a must-hear band that embodies tones of straight edge as well as PMA, if not as directly stated as the bands that came before them. Vocally, Bane is also a little easier to digest than many hardcore bands of today.

“Live By The Code” by Terror

Scott Vogel likes to serve as the voice of reason to contemporary hardcore. Though hardcore fans might not always agree with his philosophies, his band Terror have been a fighting force in the HxC scene for over a decade. “Live By The Code” is a staple track for the group fully encompassing what they believe modern hardcore should be.

Stretching into more contemporary hardcore, there are bands like Hundredth. “Break Free” showcases a far heavier edge, both vocally and instrumentally. Lyrically and thematically, Hundredth take on a more self-deprecating approach. Fans of metalcore and deathcore should start their hardcore transition with Hundredth.

“RMA” by Stick To Your Guns

While STYG isn’t necessarily hardcore, they do have several tracks that are directly influenced by the genre. “RMA” is a prime example, by taking the classic “Positive Mental Attitude” line and updating it to “Revolutionary Mental Attitude.”

“Heaven Is A Memory” by Old Wounds

Old Wounds are a New Jersey group who have been taking the scene by storm with their latest record, The Suffering Spirit. While definitely upholding a fresher sound, they are a great addition to where the world of hardcore punk is headed—and overall just a kick ass sound to listen to. (And you can catch them on Warped Tour this summer.)

“Counting Sheep” by Stray From The Path

Stray From The Path may be considered a metalcore band, but they serve as a great gateway for politically driven hardcore. For fans of Rage Against The Machine, Stray From The Path comes off as a contemporary follow up blasting things like society’s dependence on electronic devices and seemingly egotistical selfie culture, as well as national problems such as police brutality and political corruption.

“When In Roam” by Vanna

Vanna is a huge band in the Boston/New England scene, and while they encompass a plethora of genres, they have real hardcore undertones that will help anyone dive into the genre. “When In Roam” eagerly takes on that short and sweet attitude so deeply rooted in the hardcore aesthetic: “Live free/Die free.”