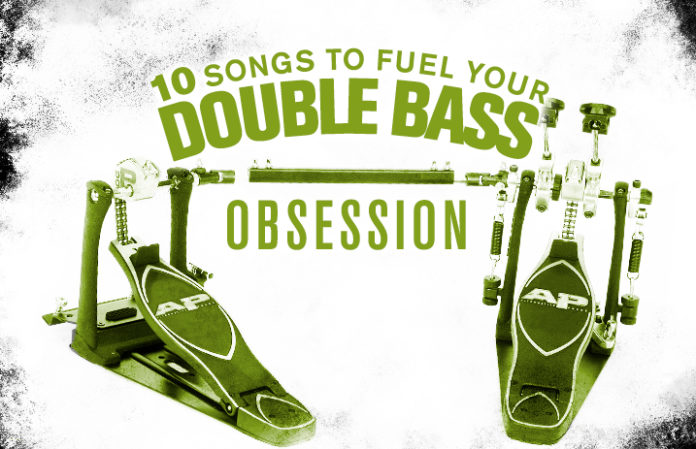 It’s no secret that vocalists tend to take center stage—not only on the actual stage but basically everywhere else too. So we’re going to give the frontman a break for once and focus on the musician who is always pushed to the back—literally. For those of you who simply can’t get enough of the double bass pedal, here’s a list of 10 songs that highlight the importance of a strong drummer.

A Day To Remember – “A Shot In The Dark”

Because who doesn’t love A Day To Remember? Whether they’re speaking to the pop-punk side of your soul or the pissed off headbanger, they know how to rev up a crowd. Though this standout from 2007’s For Those Who Have Heart is remembered for the signature guitar riff, the ending of the song is all about the double bass pedal. “Mark my words/We’re taking over the world” are the lyrics that kick off the last 45 seconds of straight drum domination. And they mean it.

Bullet For My Valentine – “Waking the Demon”

Arguably one of the best tracks from their 2008 release Scream Aim Fire, “Waking The Demon” showcases BFMV at their quickest. Sure, the band are known for their killer guitar harmonies, but Michael “Moose” Thomas’ drumming lends a militaristic backbone to this fiery track.

While She Sleeps – “Brainwashed”

Appropriately, this next band just finished their U.S. tour with Bullet For My Valentine, and the title track from 2015’s Brainwashed is all the reason you’ll need to fall in love with them. With an outspoken, punk attitude and a metal-influenced sound, While She Sleeps rips your ears apart both during their live show and on recording. Need proof? Watch the music video for “Brainwashed” and witness the double bass pedal tear the last 30 seconds to shreds.

We’re pretty sure they’re more machine than men, because the way these U.K. musicians manipulate their instruments is just inhuman. Opheon’s latest EP, As I Walk With Fire, demonstrates immense skill for musicians who are, for the most part, barely 20 years old. And if “Lost In Undertow” is any implication of what’s to come, they’re just getting started. The whole song is worth listening to over and over again, but the drumming is simply ferocious. This band shows you the definition of fast feet.

There is a reason why this is the song Phinehas fans wait all night to hear. Each element fits in perfectly with one another and makes for a brutal and determined anthem. However, this song wouldn’t be nearly as devastating if they drums weren’t so on point. Not only is the double bass unrelenting, but the cymbal work and the fills are just as well-placed.

All That Remains – “This Calling”

Even when the clean vocals kick in for the catchy chorus, Shannon Lucas does not give his feet any rest. In fact, he amps it up. Though he was only the All That Remains drummer for The Fall Of Ideals (2006), Lucas clearly put his energy into it. Like rapid fire artillery, he riddled “This Calling” with some insane double bass.

Dipping more into the metal side of the spectrum is Unearth with “The Swarm,” off of their latest record Watchers Of Rule (2014). Metal is more about technique and precision than almost any other genre, so it’s no surprise that it brings with it some gnarly drum work. If you watch the music video for “The Swarm,” you’ll also notice that drummer Nick Pierce holds his sticks with the traditional grip, which is more common in the realm of jazz than in heavy music, but provides for more agility and ease of movement once mastered. Also, it looks pretty boss.

Trivium – “Pull Harder On The Strings Of Your Martyr”

The first 10 seconds of this song is all about the drums, and it doesn’t let up much from there. Trivium let you know that “Pull Harder On The Strings Of your Martyr” is held up by percussion. What better way to show off an instrument that’s always pushed to the back of the stage?

Born Of Osiris – “The Takeover”

By “Takeover,” they clearly mean a drum takeover. Not only does the speed make the drumming on this track impressive, but the alternating syncopations drive it home. Rhythm and proper timing reign supreme here. Study up!

WARNING: NOT FOR THE FAINT OF HEART. “Bleed” reaches the height of technical drumming on this list. Stamina, control and pure talent allow for five solid minutes of mind-blowing drum work. The vocals almost don’t even matter here because the song is so focused on percussion to the point where even the guitars act as support for the drums. Listen at your own risk.

Don't forget to vote for Best Drummer for the APMAs!