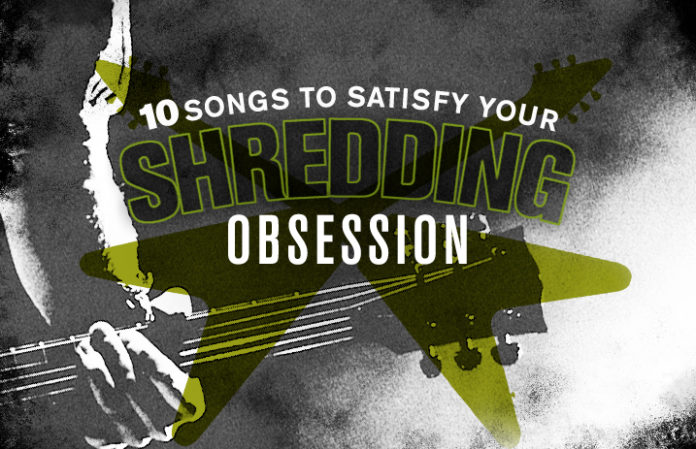 There are four songs in the “Guillotine” series by now, split between Escape The Fate and Falling In Reverse. But out of the entire catalogue, the one with the most impressive guitarwork has to be “The Aftermath (G3).”  From shredding to sweeping, there’s a full minute of solo work here courtesy of Bryan “Monte” Money, and it’s nearly impossible to find an equal in the genre.

This new Atreyu tune off their comeback record Long Live throws it back to the band's earlier days. The style recalls The Curse and Suicide Notes And Butterfly Kisses, and aside from boasting a  seriously catchy chorus, there’s a stellar guitar solo at the 3:20 mark. If you’re craving new Atreyu but miss the old school sound, this is what you need.

INK’s The Predator Becomes The Prey landed them square on the X of the metalcore treasure map. Each song delivers some insane guitar talent, but “Let’s Bury The Hatchet…In Your Head” is so sinister and epic that you can’t help but fall in love. The majority of the shredding for this one comes within the first 30 seconds, but what a 30 seconds it is.

Let’s just preface this by saying this band never should have broken up in the first place. The lovably gothic combination of dissonant chords, violin, vampires and tireless guitars makes the entirety of Lovers Requiem a record worthy of remembrance. “Pretty People” was probably the band’s most iconic song, both because it claims the lyrics “I am ghost” and because it’s so deliciously elaborate.

Let’s be honest: Virtually any ABR song would have sufficed. But we might as well put the first track off of their latest record, Found In Far Away Places, up for good measure. The strength in this band’s guitar work lies in the fact that they’re always able to make each song sound distinguished.

There’s no way we could put up a list like this and not include Miss May I. First of all, the band’s music videos are visually intriguing on their own, but their vicious instrumentals are like a shot of adrenaline to the heart. Obviously, Levi Benton is awesome on all accounts, but the true standout of this track is the shredding that doesn’t quit for one second.

Parkway Drive recently went in a different direction with their latest release, Ire, but we certainly can’t forget the ridiculousness that was Horizons. Not only can you throw down to the rhythms in “Boneyards,” but the main guitar riff will send you tearing through any circle pit.

Protest The Hero – “Blindfolds Aside”

It’s Protest. What else do we have to say?

Texas In July – “Pseudo Self”

Texas In July’s final album, Bloodwork, was released in 2014, and they couldn’t have gone out on a stronger note. Each track is pure guitar heaven, but “Pseudo Self” has the added perk of being ultra-fast and ultra-vicious.

Mors Principium Est – “We Are The Sleep”

There’s a strong possibility you may have never heard of this band, but here’s your chance to get in on some serious musicianship. If you’re looking for guitar-heavy tunes, look no further. Mors Principium Est is definitely more on the metal end of things, but they’re uniquely accessible to people who like all forms of heavy music. And the guitars definitely steer the ship on this one. Just wait 'til you get to the 3:30 mark.