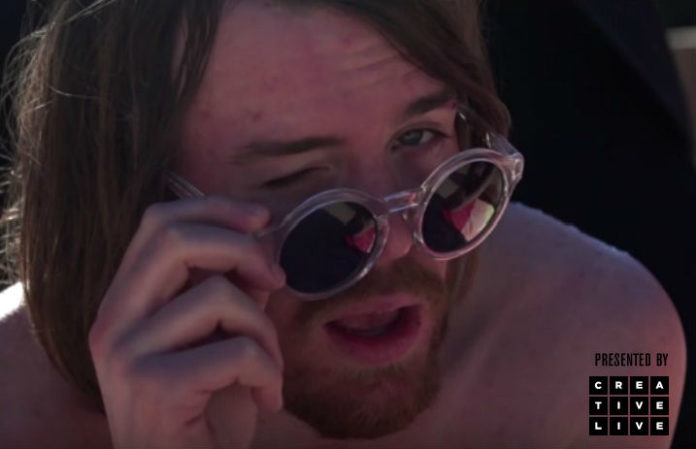 Sometimes the rock world can get noisy, and we don’t just mean in decibels or static. Often the signal-to-noise ratio is more noise than signal. But no worries: We read, listen to and watch everything so we can sort it for you. Here are some of our favorite new songs and videos of December 2015, brought to you in partnership with our friends at CreativeLive.

“UGH!” is the tasty dessert that tops off The 1975’s extravagant last single “Love Me”—a bittersweet helping that holds fans over until the band’s new album is out in February but still leaves them hungry for more. The track manages to paint bitingly personal lyrics on a backdrop of groovy art-pop beats, making it easy to ignore what frontman Matty Healy is saying (“and you’re the only thing that’s going on in mind / taking over my life for a second time”) when you’re dancing to the chorus’ infectious melody. We’re getting closer, kids—only about 60 days until I Like It When You Sleep, For You Are So Beautiful Yet So Unaware Of It (not that I’m counting or anything). —Caitlyn Ralph

5 SECONDS OF SUMMER, ALL TIME LOW, GOOD CHARLOTTE AND SIMPLE PLAN – “Have Yourself A Merry Little Christmas”

What would December be if not for peppermint cocoa, warm toes scooching closer to the fire and endless pop-punk Christmas covers? This take on “Have Yourself A Merry Little Christmas” isn't just star-studded – it's a perfect balance of old-school nostalgia and new-school thrashing guitars. Who says the Christmas spirit has to end on the 25th? I'll be playing this until Santa himself calls me up to complain. —Mackenzie Hall

BEARTOOTH – “Sick Of It All”

Earlier this month, Beartooth released “Sick Of it All,” which is a b-side track from their debut full-length, Disgusting. Since then, I've listened to the track enough to the point where I should probably be sick of it—I'm not. Like much of Beartooth's repertory, “Sick Of It All” is a seamless blend of agressive and catchy that leaves me unable to decide if I should dance or punch someone in the throat. And as if that weren't enough, they just dropped a deluxe edition of Disgusting that features four added tracks, including two b-sides, a live cover and a remix.—Rabab Al-Sharif

BEFORE THEIR EYES – “How It Feels To Be Defeated”

“How It Feels To Be Defeated” is an emotive whirlwind of refreshing post-hardcore that takes the listener back to a time when the genre was genuine. A time when you didn't have to listen to certain bands to “fit in” with the rest of a demographic. A time when genre politics didn't exist and no walls were needed to be broken down. Before Their Eyes made Midwest Modesty as an ode to better times, while simultaneously progressing into a brave new world. —Tyler Sharp

Carson Cox (from neo-psychedelic weird thangs Merchandise) and Marco Rapisarda (generator of dark hardcore vibes in such bands as La Piovra and Archaic) have teamed up to create Death Index. Their self-titled debut album (slated for release on Deathwish Inc. in late February) is a brilliantly heavy, noise-soaked display of punishment that will sate your need for all things doom-laden. Equal parts majestic and murderous, “Dream Machine” sounds like the entrance music for the Four Horsemen Of The Apocalypse to come down and destroy everything so the world can start all over again. —Jason Pettigrew

Following the release of their American Idiot documentary, Heart Like A Handgrenade, Green Day surprised fans everywhere on Christmas Eve with a new holiday-themed song “Xmas Time Of The Year”, the band's first official release of new music since their Demolicious compilation for Record Store Day in 2014.—Atreyue Ryken

Like Pacific came into the light with their self-titled EP on Pure Noise Records last year, with notable tracks like “Eviction” and “Suffering” showcasing their clear love of pop punk instrumentation, but with a grittier melodic-hardcore take on vocals. Now with their recent announcement as opening support on 2016’s World Tour, they’re in the perfect position to make a big move, and “Worthless Case” rises up to the challenge. While still holding true to their sound on previous EPs, vocalist Jordan Black stands out with his most vibrant performance yet, setting the bar for the rest of their album, Distant Like You Asked, out February 19. —Atreyue Ryken

On Covers (Side A), the Maine breathed new life into three 90s jams, crafting them to sound fresher than anything recently released. The highlight of the EP is a cover of Len’s “Steal My Sunshine,” a jaunty track that manages to include the smooth perfection of frontman John O’Callaghan’s vocals while staying true to the original track’s fun melody. Adding in a guest appearance from the ever-talented Derek Sanders of Mayday Parade, “Steal My Sunshine” and its lighthearted video is a much-needed dose of summer in these dreary December days. —Caitlyn Ralph

After many years of showing a steady holiday show pulse, the Starting Line just teamed up with Santa to stuff a seven-inch of new songs down our stockings. Talk about great expectations. The comeback track, “Anything,” is steadily catchy but doesn't overcompensate for us sorry people who've been approaching thirty in the waiting room. Verses rumble with enthusiasm as Kenny Vasoli lets us in his head with a dash of aggression, then twin guitars get back to being busy with melody. It's been almost a decade since Direction, but the major-worthy pop-rock production and nifty nuances like keys—much like our love for the band—are not forgotten. —Brian Kraus

Every so often, a song will write itself as an anthem. “Drive” is presumptuous with good reason, destined for arenas, which makes Limitless an all-the-more fitting title for their upcoming LP. The singles we've heard so far have fine-tuned Tonight Alive's power-pop genre in a way that's wise but not aged. In case you forgot, “Drive” is a friendly reminder that Tonight Alive isn't just back–they never left. “My way or the highway,” indeed.  —Kika Chatterjee