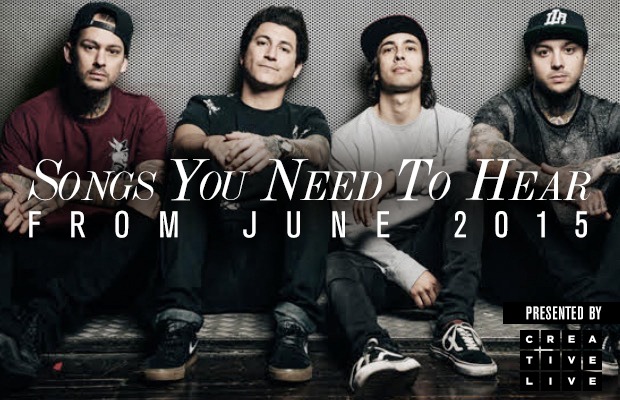 Sometimes the rock world can get noisy, and we don’t just mean in decibels or fuzz. Often the signal-to-noise ratio is more noise than signal. But no worries: We read, listen to and watch everything so we can sort it for you. Here are some of our favorite new songs and videos of June 2015 brought to you in partnership with our friends at CreativeLive.

Detroit hardcore miscreants the Armed don't really raise the bar for hardcore as much as they pull the damn thing off the wall and start beating everyone in the face with it until dispatchers have to send more ambulances. Produced by Converge's Kurt Ballou, their fifth, self-released album, Untitled, is out now and ready to be used as the soundtrack for your impending tri-state crime spree. But before you leave the house to taunt law enforcement, hook up your computer to the television, fire up some microwave popcorn and dust it with half a dozen of your little sister's Adderall XR capsules. Now check out the video for “Paradise Day,” where a miserable mailroom clerk leaves his mundane workplace behind to get all HxCx at his local dive bar's karaoke night. And when this gets nominated for an APMA next year, you will know who bitched like mad to make it happen. You're welcome. —Jason Pettigrew

On June 1, As Cities Burn returned with their first song in six years. Titled “Prince Of Planet Earth,” the track offers an unusually refreshing, avant-garde, pop-meets-post-hardcore mentality. That is, until the Bonnette brothers burst forth from the void with their signature yelps and melodies, which formulate a refreshing-yet-nostalgic atmosphere. “Prince Of Planet Earth” takes listeners back in time, while still managing to serve a dominant essence of progression—an incredibly difficult feat. While the capacity of As Cities Burn's return may be questionable at best, the simple fact that they are still writing music together is more than sufficient for this writer. —Tyler Sharp

What happens when you combine August Burns Red with A Day To Remember's Jeremy McKinnon? Devastation, that's what. McKinnon lends his clean chorus vocals to inject some melody into this otherwise metalcore jackhammer of a song. Hey, guys, look—it's August Burns Red, being really consistent and good again. At this point, Found In Far Away Places is looking like an exciting proposition. —Matt Crane

BEING AS AN OCEAN – “Little Richie”

Within the last few months, melodic and post-hardcore bands are taking the scene by storm with Being As An Ocean at the forefront. Since the release of their debut album, Dear G-d… in 2012, Being As An Ocean grounded themselves as a must-hear band. They’re here to stay. Proving they can not only bring meaningful lyrics and melodic grooves that transcend above the pack, the band have shown they can adapt to a different sound with each album released. “Little Richie,” the first track from their new self-titled album, is a perfect example for what’s to come: soft vocals intertwined with harsh screams and a melody that’s borderline addictive. Trust me, you won’t be disappointed. Then again, does Being As An Ocean ever disappoint? — Chelsea Renee Scofield

Our favorite South Carolina, melodic hardcore powerhouse have officially outdone themselves. Hundredth’s latest release, Free, is packed with so many hard-hitting songs, it was difficult to pick just one. “Inside Out,” the second single unveiled prior to the album’s release, has everything you’d want out of a Hundredth song: rough and raw vocals, declarative lyrics, insane breakdowns and even some surprises from vocalist Chad Johnson. Here, Johnson experiments with different vocal techniques, including a bit of clean vocals. I dare you to not hit your best friend in the nearest mosh pit once Chad exclaims, “Set myself free!” and the heavy breakdown kicks in. —Chelsea Renee Scofield

Gatsbys American Dream singer Nic Newsham once mockingly sang “Where's the fucking chorus?” and the Money Pit finally answer that age-old question. That's his new band with GAD counterpart Bobby Darling, whose riffs flash their familiar quirks on a pop-rock pedestal—right on the level where Newsham thrives. We love hearing their chemistry shine again, and anything is better with 'Hawaii' in it. —Brian Kraus

Earlier this month, Buffalo, New York's Pentimento gave us their new single, “Stuck Together.” Honey-thick harmonies hit like Small Brown Bike ca. the River Bed—see the all-you-can-eat chorus with a side of grits. While that paints a louder picture, consider the delicate, purely emo intro that begets the volume swell. First signs point to hitting the bullseye on the forthcoming album. —Brian Kraus

PIERCE THE VEIL – “THE DIVINE ZERO”

We’ve chronicled Pierce The Veil’s road to album number four for almost a year. There was the in-studio Q&A with singer/guitarist Vic Fuentes, the in-depth PTV cover story [AP 321] and multiple follow-up conversations ever since, most notably with drummer Mike Fuentes in this year’s Warped Tour issue [AP 324] and recently injured guitarist Tony Perry in this year’s APMAs issue [AP 325]. Considering the mega-success of Collide With The Sky, which produced the gold-certified single “King For A Day,” we can’t blame the San Diego boys for working so hard to get everything perfect. “The Divine Zero” hit YouTube just in time for Warped. Was it worth the wait? Of course it was! Duh. Those 855,000 views in 10 days aren’t because it’s awful. —Ryan J. Downey

Winter in Ohio was long and awful, so I’m still fresh out of seasonal depression. As much as I love the emo revival, I am sorely in need of uplifting music; “Art School Wannabe,” off of Sorority Noise’s sophomore release Joy, Departed, is just so damn fun. I’m a sucker for anyone that can take dark subject matter and lighten up its melody, which is the angle for the whole record. Especially as a teenager drowning in Internet sad culture and Lana del Rey, “Art School Wannabe” is refreshing. “Maybe I’m just scared to admit that I might not be as dark as I think,” frontman Cameron Boucher sings, taking aim at the angsty core of his own genre. —Kika Chatterjee

There’s this gut-twisting moment in the quiet at the beginning of “Cardinals” where you’ll be crossing your fingers, thinking of how amazing The Greatest Generation was and wondering how in the world the Wonder Years will top it. But don’t worry. I actually started clapping when the heavy guitars kicked in and Dan “Soupy” Campbell’s strikingly emotive wails overtook the track. If you aren’t careful, this song and its nightmare-reminiscent music video will leave you weeping. Judging by this single alone, it looks like No Closer To Heaven is going to be yet another step up for TWY. Amazing. —Cassie Whitt