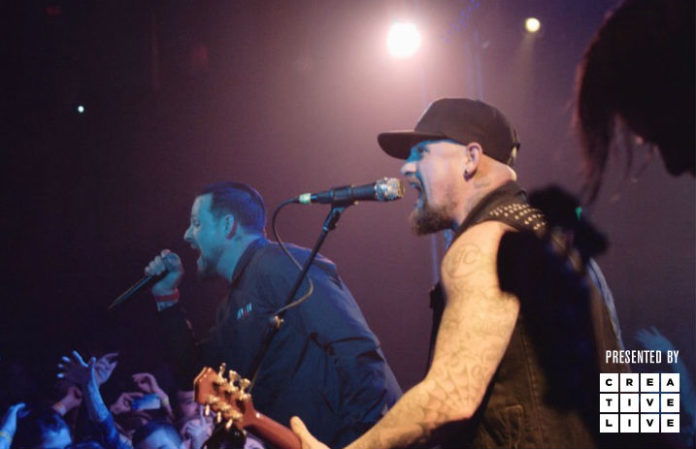 Sometimes the rock world can get noisy, and we don’t just mean in decibels or static. Often the signal-to-noise ratio is more noise than signal. But no worries: We read, listen to and watch everything so we can sort it for you. Here are some of our favorite new songs and videos of November 2015, brought to you in partnership with our friends at CreativeLive.

Boston Manor's four-song EP Saudade is a solid display of pop-punk calisthenics and dynamic arrangements—which makes for a great listening experience, but a pain in the sigmoid colon when you're in this writer's position of having to pick one track for this particular column. After five consecutive plays, the winner here is “Trapped Nerve,” which captivates with caffeinated drum fills, layered guitar arrangements and frontman Henry Cox's strident vocals. Boston Manor are unique because they have the goods to transcend generations while giving today's pop-punk aficionados some vicarious thrills they never knew they were missing in the first place. Play it for your friends, your parents and yourself. Hey Pure Noise, when's the album? —Jason Pettigrew

Come Wind have been around a while now, but many of us are just, uh, catching wind of them now (sorry). That's all thanks to their brilliant new album busting through heads and hearts. On our handy premiere of “Clarity” from Move In Place, the band medicates anxiety-riddled rock (Dear And The Headlights, Tallhart) with its smoother, more complacent counterparts (As Tall As Lions, Lydia). This one goes down easy, with enough life in it to keep you invested. —Brian Kraus

The Good Charlotte reunion could have sounded like anything. GC were not ones to stick to a formula from album to album. So, when “Makeshift Love” (and its hilarious accompanying video for a product called “Break App” which features cameos from producer John Feldmann and Mikey Way) surfaced, fans rejoiced. It’s every catchy, bouncy, heart-wrenching thing we love about GC executed perfectly. #WelcomeBackGC —Cassie Whitt

If you’re anything like me, when you heard Handguns were releasing another full-length your reaction was somewhere between “seriously?” and “AGAIN?” (both said without a hint of disappointment).  Barely a year after Life Lessons, the boys from Pennsylvania showed up with another pack of pop-punk jams destined to be played to screaming crowds at Warped Tour. My favorite of the bunch happens to be the closer track, “Recovery,” which I’ll be subjecting my straight-laced family to for the entirety of the holidays. (Who needs Christmas songs when you have pop punk, am I right?) —Mackenzie Hall

The Direction Of Last Things is Intronaut's best effort yet, and at seven minutes of inventive, sometimes crushing, always groovy, Jazz-fusion prog-metal, “Fast Worms” is perhaps the most solid example of that. Fans of everything from Between The Buried And Me to Tool can enjoy, and undoubtedly will. Get lost in your inevitable reverence of truly talented musicianship. —Brian Leak

The first time I heard Kid Cadaver, my immediate reaction was, “Wow, this band should have been huge, like, yesterday.” With their shimmery, danceable pop and the release of this uplifting video for “Keep Well,” this group are definitely going places. I also know that because every time I play them, people around the office remark, “This is good. What is it?” See you at the top of the charts, Kid! —Cassie Whitt

As heard on their latest single, “Still Here,” Texas-natives Kublai Khan aren’t ones to beat around the bush. Their brand of straight-to-the-point, no bullshit metalcore will have you fighting back an unwavering urge to spin-kick the nearest wall. As if their brute force wasn’t enough, Kublai Khan bring in Acacia Strain headmaster Vincent Bennett to push the riff-heavy track over the top. —Tyler Sharp

It's challenging to choose just one track from Moving Mountains' new split with Prawn, but “Deathless” is arguably the strongest offering on the four-track release. Perfectly timed to soundtrack the current seasonal changes with accentuating enchantment, MovMou have crafted one of their best tracks to date with “Deathless.” Carried by a foundation of beautifully alluring instrumentation, packed with gorgeous strings and delicate percussion, Gregory Dunn's comforting vocals pull it all together in a cozy, post-rock, post-hiatus beauty. —Brian Leak

Making her triumphant return to music, the former Flyleaf frontwoman reappeared on the scene with her debut single “Impossible” from her upcoming solo album, Life Screams. Coming from an artist known for her heavy lyrics, “Impossible” brings a more positive outlook to a genre usually littered with negativity and hopelessness. “Every morning I see another miracle,” Sturm sings. The ballad screams her mission statement as a solo artist to “wake up and be alive, because there’s hope.” —Jake Hanson

Say what you will about Mr. Bieber, but it’s near impossible to deny what he has managed to accomplish with his latest studio album, Purpose. A pop amalgamation of seasoned songwriting and eloquent melodies, the LP can be considered the most worthwhile in Bieber’s catalogue without question. When teaming up with future electropop megastar Halsey on “The Feeling,” Bieber channels his prowess into  a fine point of musical tension, which is then relieved by his co-star’s graceful chorus offering. Is the world in love with Justin? Or is it in love with the feeling his music conveys? With Purpose, this writer is convinced it doesn’t matter. Good music is good music—period. —Tyler Sharp