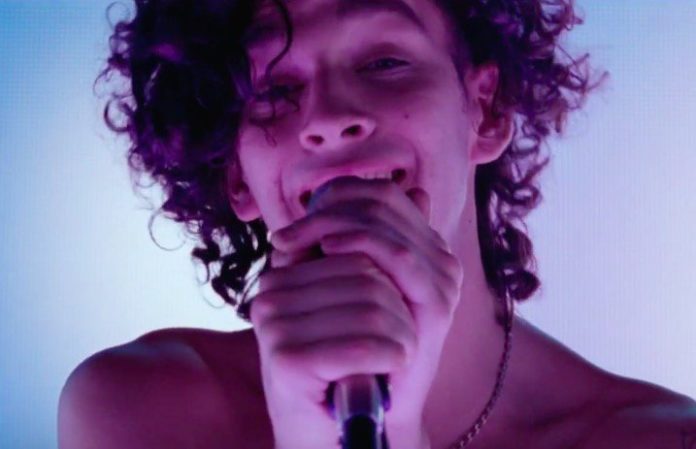 Oh, Matty Healy’s Twitter account, how do we love thee? Let us count the ways. Proving to be a wellspring of information and retweetable material, the 1975 frontman’s Twitter manages to evoke every emotion while covering a wide variety of important topics such as politics, gay marriage and religion. However, he never hesitates to throw shade or make timely (and hilarious) pop-culture references either. Here are just a few of the more memorable times Matty Healy made the most out of 140 characters and won the internet.

It’s safe to say the 1975 seem to meticulously plan just about everything they do. So it’s no surprise Matty started dropping hints of their new album I Like It When You Sleep… even as far back as January 2015—that’s more than a year before the record dropped! Since then, Matty went on to give clues surrounding numerous songs from the album like “Love Me,” “The Sound,” “A Change Of Heart,” “She’s American,” “Lostmyhead” and “This Must Be My Dream.” Excuse us for a moment while we pick our jaws up off the ground. *MIND BLOWN*

a change of heart. pic.twitter.com/lMoNU3Zx8C

This must be my dream

When he gave Bring Me The Horizon a shout out

the handsome and british @bmthofficial have just dropped their brutal new album. go get from it here http://t.co/OCDhL25owK…

And was clearly in awe of the whole thing.

that made no sense @olobersyko

We don’t blame you, Matty.

When he was Becky

I mean, he does have really good hair.

When his GIF game was strong

Listening to the album in full for the first time in a while pic.twitter.com/SswL4HakP6

We all know how important GIFs and internet slang are in today’s digital society. We’re all constantly connected, and a lot of times, we don’t even use full words or sentences. Instead, we use emoticons, on-point GIFS like the one chosen by Matty, or phrases like “it’s lit” (which can also be found floating around his Twitter space) to describe how we feel. What a time to be alive.

When he put the media to shame

READ THIS I'M PISSED OFF pic.twitter.com/GKZYfNNDqX

Let it be known that Matty Healy refuses to be labeled a misogynist simply because he doesn’t want to date Taylor Swift. Bye, Felicias.

When he called out the British Parliament for stealing

'LOOK OUT KIDZ THE GOVERNMENT ARE STEALING OUR THOUGHTS!!' @UKParliament pic.twitter.com/Zc8lyReYrn

How do you sue the Government??

A recent British Electoral Commission voting referendum campaign looked uncannily similar to the 1975’s album art rollout for I Like It When You Sleep… and Matty was having NONE of it. He even threw shade at the Prime Minister of the United Kingdom. We’ll be anxiously waiting on that fire mixtape.

When he called out Radiohead for not stealing

Radiohead didn't copy The 1975 they're fucking Radiohead. They could steal my actual legs and I'd not be bothered anyways

Remember when the 1975 blacked out their social media accounts and scared everyone to death before announcing their return and new pink aesthetic? Remember when Radiohead did the same thing… except not so much pink? The internet subsequently lost its mind, but Matty wanted everyone to calm the eff down. And for the sake of his legs, we’re really glad you did. We live for Matty’s dance moves, lbr.

When he advocated for important issues

Never shying away from digging deeper into today’s hot-button issues, Matty often tweets in support of women’s right and mental health, just to name a few, and that’s a solid win in our book. He’s also not afraid of calling out America, either. Pretty brave to go up against an entire country, if you ask us.

it's #InternationalWomensDay. the empowerment of young women maps directly onto the reduction of all oppression. EMPOWER YA' SELF!! ✊

When he trolled this guy

.@Reverend_Makers 7TH I AM YOUR OG AND I WILL BE RESPECTED AS SUCH

.@Reverend_Makers
3rd no one I know has ever listened to one of your albums all the way through

.@Reverend_Makers 7TH I AM YOUR OG AND I WILL BE RESPECTED AS SUCH

.@Reverend_Makers BRO FIRST OF ALL YOU STOLE YOUR WHOLE SHIT FROM CUDI

Clearly, Matty will slay anyone who belittles his art (or his unbuttoned shirt). The British slang here like “does my cake in” combined with Matty’s intense caps lock rebuttal is just all around A+.

When he first graced us with his presence

While Matty first joined Twitter in 2010, he didn’t compose his inaugural Tweet until 2011 and apparently wiped his account clean in 2014 after backlash from alleged Islamophobic comments and some beef with One Direction (he later apologized for it in a string of tweets like the one below).

peacefull muslims, christians, one direction fans i do love you simply for being human

But praise the internet and its almighty ability to search the ever-so-important, and oftentimes embarrassing, first tweet. We’ll just leave this here.