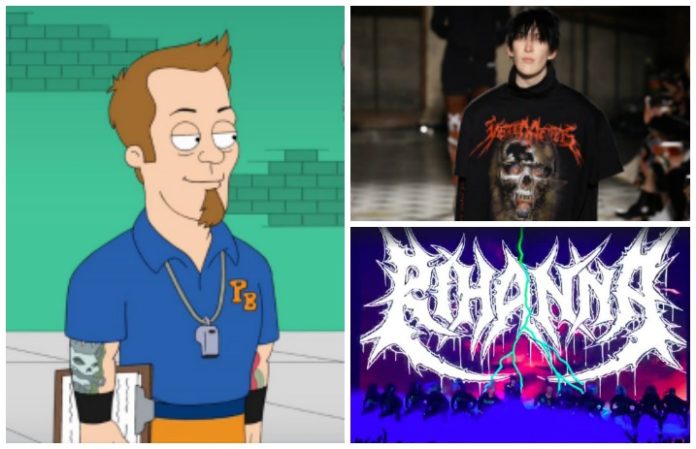 Metalheads, punks and hardcore kids don’t much care for the mainstream—that much has always been clear. However, there has always been some crossover between the two worlds. It’s somewhat of a controversial issue. We compiled a list of 10 moments from the past year that the mainstream reached into the underground and put it center stage.

Rihanna at the VMAs

When Rihanna displayed her name in gigantic death metal typography at the 2016 VMAs, metalheads didn’t know what to do with themselves. Some were offended, but others thought seeing their genre represented on such a big stage was the coolest thing the VMAs had done in a very long time. Personally, this writer immediately wanted a shirt with a death metal Rihanna logo.

A recent commercial for the 2017 Kia Sorento featured NFL star Bo Jackson hopping in his new ride and joyously requesting the car to, “Play Tecmo, metal version!” He races through the old-school game playing field to the shredding of guitars, and, just for a second, metalheads got to feel represented.

Justin Bieber very publicly became buds with Marilyn Manson recently, and to follow it up he’s been donning some metal threads. Aside from simply rocking a Metallica shirt every now and then, the pop star has recruited metal artist Mark Riddick (the Black Dahlia Murder, Suicide Silence, Dethklok) to design his new clothes and promo materials.

Vogue Article—“The Rise of Metal Iconography in Fashion”
Back in March, Vogue published an article concerning this very phenomenon. Metal has started to become so common in mainstream fashion that it prompted writer Steff Yotka to compose a full op-ed tracing the course of the heavy genre’s influence.

The runway saw metal iconography this year when Demna Gvasalia used satanic symbols, pentacles, skulls and blood splatter in a collection that set the 2016 Fashion Week buzzing. It looks like what we wear to our favorite band’s basement shows can be considered high fashion. Who knew?