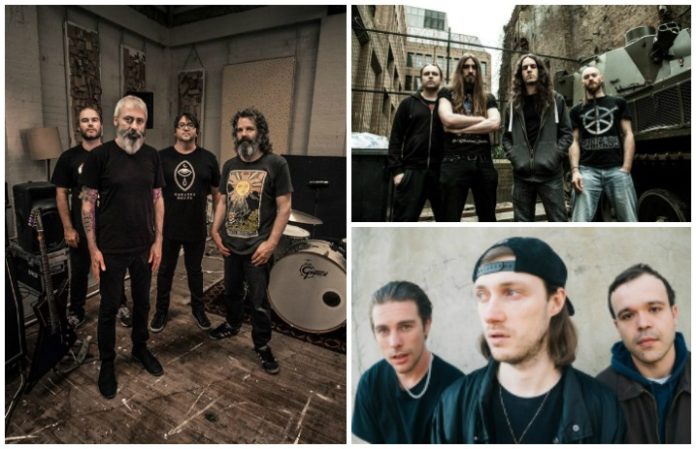 In today’s popular music, it’s easy to get caught up in all the big names and await their newest releases, and that’s why it’s essential we never forget those who are grinding just as hard without as much support. Here are 10 bands you may not have heard of, but need to check out.

If you are a fan of acts such as Dark Tranquility or old school In Flames, Orbit Culture is right up your alley. These melodic death metal giants capture the essence of heaviness and groove and hold an incredible balance of growls and clean vocals. With superb poetic lyricism, this is metal with a personal statement, and it’s sure to grab at the heartstrings of many.

Another terrific act from across the pond, Beastwars is all out smokey and sludgy (perfect for fans of Crowbar or Mastodon). With kick-in-the-face riffs and groovy drums and bass, Beastwars makes for an all-out heavy act that is sure to give you whiplash.

Feminist death metal? Damn straight you heard that right! This four-piece all-female act is one of the most brutal bands around right now and deserves every single bit of your attention. With instrumentation similar to that to Cannibal Corpse, Castrator take the time lyrically to discuss truly horrific things that happen in our world, and by using an art form they love, help to establish a dialogue so we can begin to discuss change.

Do you like horror movies, wrestling and thrash metal? Do you like bands similar to Municipal Waste and Havok? Then you ought to get yourself a dose of VHS. This is pure fun and fast thrash metal. There isn’t anything heavy-handed about this music, just straight up bliss to head bang and munch on pizza to.

Sumac are one of the most unique acts out today. While combining death metal growls, doom atmosphere and sludgy instrumentals, their music is a beast of its own. If you like your music slow but with heft in each note, Sumac provide a sound that is thick and captivating in atmosphere.

Check out: Their latest album What One Becomes, released this past June

If you like your metal with elements of crust punk and a dirtiness reminiscent of bands like Napalm Death, West Coasters Atrament are ready to tear your eardrums apart. With constant slamming D-beats and song after song that pummels the listener, Atrament are a relentless force that can only be summed up with one word: evil.

Check out: Their latest album Eternal Downfall, released this past May

If you want your metal epic with powerful riffs, then let your ears wander over to the U.K. for Bloodshot Dawn. This is melodic death metal meets power metal. With excellent musicianship in technicality and vocalization, Bloodshot Dawn is a fantastic treat in the realm of heavy music.

What would happen if you took a band like Periphery and made them a lot more poppy? Well, it would more than likely be Destiny Potato. Now I know what you’re thinking: What’s up with that name? Just drop trying to wrap your brain around it and focus on the music, because this is the best combination of pop, djent and crushing metal. With stunning vocals and powerful instrumentals from all spectrums of sound, each song is hook after hook of delight.

Check out: Their latest album Lun, released back in May of 2014

If you crave something new, unique and powerful, you can’t do any better than Zeal And Ardor. Mixing elements of black metal, industrial electronics and American Southern blues, Zeal And Ardor have created a sound of their own filled with beauty, sadness and power. They show superb musicianship in not only crafting a unique sound, but in creating music that takes hold of the soul and of our emotions.

Check out: Their latest album Devil is Fine, released this past April

Out of this entire list, Puppy are the band most likely to stand out for potential commercial success. They play a terrific combination of metal, rock, punk and indie elements, and I don’t know many bands that blend so many sounds together so well. In their currently small discography, they’ve created so many catchy hits that there is a Puppy song for every moment you can think of. This is a band that reminds one just how fun and magical music can be.

Check out: Their latest EP Vol 2, released this past August