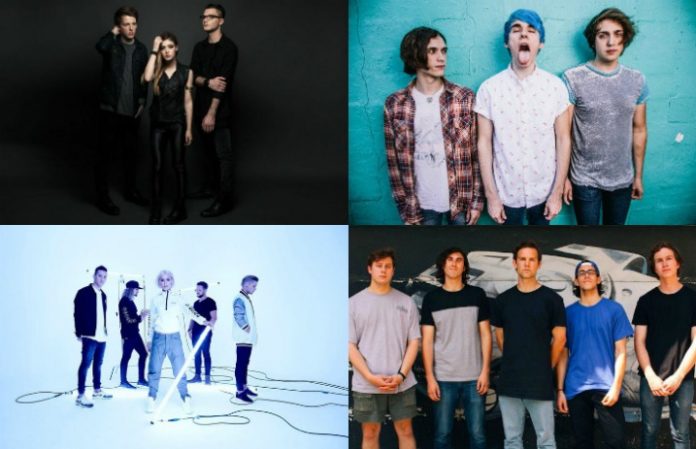 What do Blink-182, Fall Out Boy, Paramore, Beck, No Doubt and Katy Perry all have in common? Each of these artists played Warped Tour shortly before skyrocketing to fame. While the 2016 lineup includes many established favorites like New Found Glory, Good Charlotte and Sum 41, there are plenty of newcomers you’ll want to keep an eye on. We’ve assembled a list of 10 up-and-coming bands that we recommend seeing while you’re catching rays and satisfying your pop-punk heart this summer.

What happens when you fuse together Brand New's last two albums with one part Turnover and a splash of Crime In Stereo? Pure musical genius, that's what. Ontario post-hardcore band Safe To Say have been on our watchlist since they self-produced their hooky Hiding Games EP in 2015. These festival newcomers will be joining their Canadian pals Like Pacific on every stop of this year's Warped Tour, and it's safe to say you don't want to miss out on seeing this young band light up the Full Sail stage. And don't forget to pre-order their new album Down In The Dark, out 7/22 via SideOneDummy!

Named for two honeycomb towers that got their own Chicago zip code (for no real reason), this theatrical six-piece has the artistry and determination to give Brendon Urie a run for his money. Marina City, who self-defines as an aggressive pop-rock band, sold out the first show they ever played in 2012 and has since shared the stage with the likes of Amanda Palmer, State Champs, Cartel and Senses Fail. Last year Marina City even pulled a Cady Heron and took the crown at the Vans Warped Tour 2015 Ernie Ball Battle of the Bands.

Formed in 2010, this punchy pop-punk band from Richmond is somewhere at the crossroads of Four Year Strong, the Wonder Years and Such Gold. While their studio recordings will have you shouting along within minutes, Broadside is definitely a band that is meant to be experienced live in the center of a mosh pit with your fist thrust high in the summer air.

Headquarters: Richmond, Virginia
For fans of: The Wonder Years, Real Friends, playing in traffic, them having the mic and you having the mosh pit

Good Charlotte has been parading Waterparks around since Benji Madden produced the band's third EP Cluster in early 2016. Just coming off the GC Reunion Tour, this neon-haired, pop-sensible trio draw influences from Fall Out Boy and Panic! At The Disco and are on the verge of exploding.

Headquarters: Houston, Texas
For fans of: State Champs, Manic Panic hair dye, dads (as a concept), jumping up and down for an entire set and onions

This band of pop-punk criminals claim to have met in prison and have yet to play a show without a parole officer (or, y’know, their tour manager in Aviators…) present. Much like a criminal on the run, each of the Intruders wears a ski mask that correlates to his respective color to hide his true identity. With an endless supply of satirical love songs and a good dose of talent behind them, Masked Intruder are shaking up the music scene one crime at a time.

Headquarters: Madison, Wisconsin
For fans of: Eating burritos in prison, always dressing like it's ski season and doing 25 to life in the name of love

SayWeCanFly is the moniker of Braden Barrie, an acoustic emo musician with a sound and honesty akin to the Spill Canvas. This guy will give you all the feels during his Warped Tour performance, which will include hit single “Intoxicated I Love You,” a song that tells the story of Barrie losing his virginity during a one night stand.

Headquarters: Ontario, Canada
For fans of: The Spill Canvas, Brand New's “Sic Transit Gloria,” having your heart broken and buying tissues in bulk

This skate-punk band have been around since Y2K and are about as catchy as the Ramones, as carefree as FIDLAR and as blunt as Fat Mike. There is something really timeless about Teenage Bottlerocket, and while it's a mystery why their single “Skate Or Die” has yet to be featured on a Tony Hawk: Pro Skater soundtrack, this band radiates so much positivity during their live shows that you'll want to crack a cold one and sing along to their punk rock anthems well after their Warped Tour performance is over.

Headquarters: Laramie, Wyoming
For fans of: The Bouncing Souls, Screeching Weasel, doing ollies and bands that dress like the Ramones

If you've ever wondered why Tonight Alive's cover of Mumford and Sons' “Little Lion Man” is so damn compelling, it might be because before Jenna McDougall joined in on the party, Tonight Alive was a two-piece cover band. Now a quintet signed to Fearless Records, Tonight Alive are sharing microphones with Benji Madden, having their original music featured on Spider-Man soundtracks and being dubbed the Paramore of the land down under.

If you love pop punk as much as the next New Found Glory fan and you often feel nostalgic for past summer vacations, car ride singalongs and old romances, then you should be listening to Knuckle Puck.

Knuckle Puck have been buzzing around town since the 2015 release of the sometimes gritty, always catchy, Copacetic. Following the release of their full-length (currently up for Album Of The Year at the APMAs), these Chicago natives have played their first set of headlining dates ever and even joined State Champs and Neck Deep on The World Tour.

Headquarters: Chicago, Illinois
For fans of: The Movielife, the Story So Far, keeping it copacetic and leading a life of firsts on foreign soils

You know how Katy Perry, Paramore and No Doubt all got their big breaks just months after playing their first Warped Tours? If there's a breakout band on this year’s lineup, then our money is on Against The Current. This dreamy pop-rock trio just released their first album through Fueled By Ramen in May and have already reached international success with a little help from their old friend, YouTube.

Make sure to catch Against The Current this summer while you can still see them at one of Warped Tour’s smaller stages.

Headquarters: Poughkeepsie, New York
For fans of: Imogen Heap, Tetris, the internet, girls and guys who sing together and believing in gravity