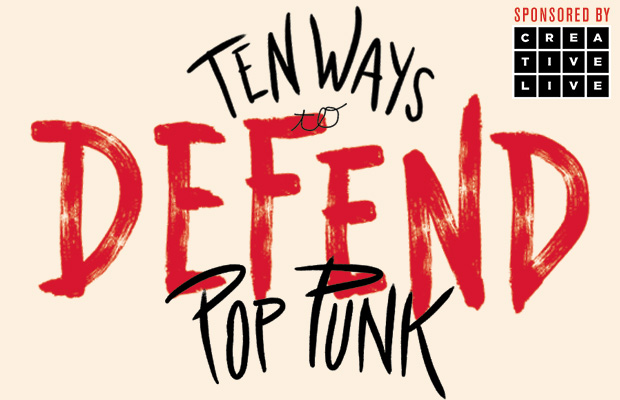 “Defend pop-punk” has been a mantra of our scene since Man Overboard first introduced it a few years ago. But how does one really “defend” pop-punk? What does that mean? Do genres need defending? Well, in the case of pop-punk, it does need defending—and lots of it. We’re under siege, man. Other, more hipster-friendly genres often steal the spotlight. Pop-punk popularity comes in waves and it experiences some pretty rough low points (e.g., 2008) in between its peak years (2003 and 2013, so far). Defend the genre. Keep it strong. Here are 10 ways to properly defend pop-punk:

INVEST IN IT.
One of the best ways to defend pop-punk is to proactively keep it healthy and robust by investing in it. From a financial perspective, investing is the most committed form of believing in something. Record labels like Pure Noise and Run For Cover have been great investors in the genre over the past few years. When those labels started getting traction, the genre had pretty much bottomed out in popularity, so it wasn’t exactly a safe move. Now, larger indie labels like Fearless and Hopeless are investing in pop-punk bands (e.g., Real Friends and the Wonder Years, respectively), and are launching the bands’ careers to the next level.

DEFEND YOUR FANS, VERBALLY.
Pop-punk is one large family, and the fans are just as important as the bands. So, musicians, make sure you’re quick to defend your fans. If security gets a little out of hand and punches one of your supporters, don’t be afraid to launch into a massive tirade against them. Honestly, the more angry you are, the better—it’ll only make your fans love you even more, like it did for Jeremy McKinnon.

DEFEND YOUR FANS, PHYSICALLY.
Obviously, this is the last resort, but if you see one of your fans in danger (like the Story So Far’s Parker Canon did, in this case), do not hesitate to take action. Do so, and you shall be elevated to god-level status by your fans.
REVIVE IT. SPREAD IT.
The single best defense of pop-punk we’ve ever seen is the current resurgence of young bands who came up at a time when the genre was dead, rejected what was popular and struck out on their own. Bands like Four Year Strong, the Wonder Years and Man Overboard were some of the first, but they really paved the way for revival bands like Real Friends, Neck Deep, State Champs, Knuckle Puck and the Story So Far. Not just the bands, but the zealous, down-to-earth group of fans that have sprung up around this scene are the fuel turning this thing into a forest fire.
DEFEND YOUR FANS FROM SHITTY STAGE DIVERS.
Stage diving sucks. It’s selfish, dangerous and insanely annoying to anyone trying to enjoy the show. Jumping on top of someone’s head is more accepted at a hardcore show, but at a pop-punk show, in the “take a selfie onstage” generation, with lots of tiny girls in the crowd, it’s absolutely ridiculous and irresponsible. “But stage diving is so rebellious; it’s what punk’s all about!” Look, you’re not exactly rebelling against “the man” by going to a Joyce Manor show—and they’ll be the first to tell you that. It’s refreshing to see bands speak out against something and take the backlash on the chin.
EMBRACE YOUR POP-PUNK ROOTS.
Hey, old guys, it’s important for older pop-punk bands to embrace the younger, up-and-coming acts and continue to be an active part of the scene. New Found Glory’s Pop Punk’s Not Dead Tour was a great example of this, where the band—who were from a totally different era, scoring Gold records and radio play—took Set Your Goals, the Wonder Years and Man Overboard and This Time Next Year on the road with them. Senses Fail are doing it by taking Knuckle Puck out on their Let It Enfold You 10-year anniversary tour. Imagine if bigger veteran bands like Blink-182 and Green Day did this. One tour like that could be enough to launch a young pop-punk band’s career.
DON'T TAKE POP-PUNK TOO SERIOUSLY.
In this genre, it’s important for both bands and fans to have a good sense of humor. The music you make/listen to can be a little silly and riddled with clichés, at times. If you can listen to something like Sunrise Skater Kids’ “Pop Punk Pizza Party” (the most generic pop-punk song ever created), laugh, admit you actually still like it and then admit that’s kind of sad in and of itself, then you’re all good.
SELL T-SHIRTS.

It would be impossible to make this list without giving due credit to the founders of the Defend Pop-Punk uprising, Man Overboard. Selling T-shirts that highlight “Defend Pop Punk” and not your band’s name could be seen as a pretty risky move. But it actually worked out well, helping to further promote the pop-punk culture.

PAY TRIBUTE AND COVER OTHER POP-PUNK BANDS.
Keep the genre strong, close and united. Pop-punk bands covering other pop-punk bands is good for pop-punk—whether it’s Neck Deep covering Green Day, 5 Seconds Of Summer covering Blink, the Story So Far covering Blink, All Time Low covering Blink or pretty much anyone covering Blink. Young bands, if you don’t have a Blink-182, NFG, Green Day or some kind of veteran cover in your set from time to time, then you’re doing it wrong.

The Defend Pop-Punk Facebook group: You will never find a more wretched hive of scum and villainy. This “closed” group is 20,000 plus members strong and more active than most. On a typical day, you’ll see active threads ranging from “There is actually nothing punk about pop punk lol” (108 comments) to “New Slipknot rules” (0 comments) to “If you ever jammed All Time Low, Boys Like Girls, We The Kings or any similar band but currently talk shit about 5 Seconds Of Summer please explain yourself” (79 comments). This is the place to be to gossip about the genre and debate about the new Yellowcard and New Found Glory albums.