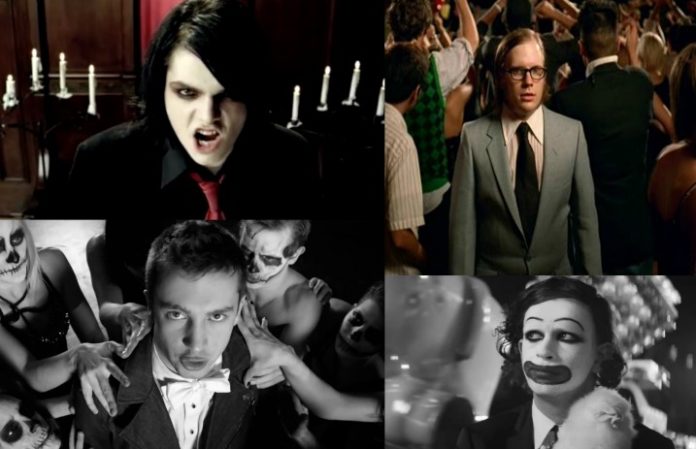 The alternative music scene isn’t necessarily known for its dance moves, but that doesn’t mean we haven’t seen our fair share of amazing choreography in music videos. While these clips might not be “Thriller,” they do showcase incredible dancing and should be recognized. There’s more to music than wearing snapbacks and guitars, people. And to that end, here are 11 music videos with phenomenal choreography and more moves than Brendon Urie accidentally sitting on an anthill while wearing a Speedo…

OK Go have become known for their moves, but this is video is the one that took them to viral status. Within a couple of days of posting it on YouTube, the video reached 900,000 views, and for good reason. This impressive piece shows immense creativity, proving it doesn’t take a big budget to make something special.

Back before the guys in All Time Low were even old enough to legally pop a bottle of champagne, they released this video. Right around the two-minute mark is where things heat up and the guys break out into a choreographed dance routine. What they lack in technique (Which is a lot. It’s bad. Like really bad), they make up for in spirit and dedication. We give them props for really going for it, and the result is, dare we say it: So Wrong, It’s Right.

Western Russian metalcore outfit Wildways enlisted the help of dancer/choreographer/twerking expert Kate Shoshina for their over-the-top “Faka Faka Yeah” video. Yes, twerking is a form of dance. Despite the negative view many might have of it, this style takes a lot of strength and control to execute. Shoshina and her twerk team were new to the heavy music genre, but they certainly brought their A-game to this celebration of excess.

Dancer/choreographer Vinny Balbo brings this song by instrumental outfit Polyphia to life. “LIT” is a re-imagined version of the band’s previously released song “Light” fortified with popping and locking that suits this groovy track perfectly. We can definitely see this song inspiring others to create their own methods of dance.

Directed by frequent Foals collaborator Dave Ma, this video shows the strange and beautiful side of contemporary dance. The climax to the quirky choreography at the four-minute mark is truly striking.

Who could forget this Missy Elliot-channeling moment in Good Charlotte’s history? Frontman Joel Madden and his (let’s call them mature) backup dancers tear up the dance floor in matching Adidas tracksuits. Werk.