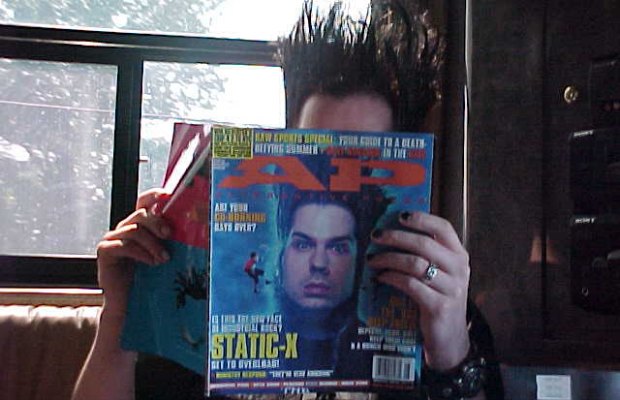 As the frontman of Static-X, the late Wayne Static (né Wells) brought guitar crunch and electronic elements into the American rock forefront in a way that got the metalheads out on the dance floor. (Really. “Keep Disco Evil” was an ironic band motto that adorns the band’s shirts to this day.) While he was maligned by many critics for biting the moves of electro-plated metal figures such as Ministry’s Al Jourgensen and Rob Zombie, Static’s work has a direct conciseness that emphasized whiplash headbanging over weirdo head-case freakiness and gratuitous electronic noise (most of the time). Yet it was a criticism he way okay with, as he always preferred the industrial-rock tag than the nü-metal ghetto category many listeners and detractors carelessly lumped his band into. Static was also doing that vicious, unclean staccato scream/growl vocal that’s been co-opted by plenty of heavy music scenes over the years. Too bad nobody ever pulled it off as commandingly as he did.

This playlist is culled from both well-known tracks and deeper cuts from the band’s discography. Fortunately, Static left a body of work that sounds great whether its played through a club’s towering sound system or a crappy car stereo tape deck as you drive 90 mph down the interstate. Our condolences go out to Static’s family, friends and fans. The rest of you should let the decibels wash over you like battery acid.

ABOUT THE PHOTO: “I snapped this photo on the tour bus while rolling down the road during the Extreme Steel tour in 2001,” recalls photographer Marty O’Brien. “We were opening for Slayer and Pantera on what would be Pantera's last tour ever. This was an exciting time for the band, and they had asked me to fill in on bass since Tony [Campos] had a broken collarbone. Everyone thought we had planned this photo, but I literally just looked up and Wayne was reading this article in this magazine and I snapped the shot. These guys were great to me and I always appreciated their friendship. So much that once Tony's collarbone had healed, I stayed on the tour for another two weeks just hanging out, watching Pantera every night and not even playing bass anymore. Wayne will be missed by many. Rest in peace.”

The first single from Static-X’s debut had the reductionist mindset of Helmet and a vocal style somewhere between James Hetfield and Rob Zombie, with a little bit of Yosemite Sam thrown in. The big-ass beats and club-land sequencer lines were key in lubing up mosh pits and dance clubs for maximum rock aerobics. Any dude who heard this song in a club at the turn of the century and caught a sexy girl’s elbow in his eye socket knows exactly what I’m talking about here.

You can’t help but wonder if System Of A Down’s Serj Tankian was taking notes at Static’s patently insane linguistic athletics on this track.

In 2001, the band followed up Wisconsin with Machine, an album that tweaked the electronics in the mix a little more and continued to ratchet up the energy. On this track, Static’s bellowing of “I hate thissss!” sounds more convincing than anything to ever come out of Fred Durst’s piehole. This was also the year Static graced the cover of AP 157 (Aug 2001).

You can’t make out a single word of what he’s saying in the intro. And that’s totally cool, because Static’s vocals act as a primitive texture that further heightens the song’s aggression. The video lifts from both The Blair Witch Project and the cut-up found-footage collage editing style of the legendary video production company H-Gun, who were responsible for plenty of industrial rock classics from Nine Inch Nails, Ministry and Revolting Cocks.

No rapid urgency on this one, but the dirty harmonics (Did Wayne rock a Godflesh album or two?) and the mid-tempo pulse make for an excellent respite from the band’s frantic fare.

Released in 2011, Pighammer was the name of Static’s only solo album and though it really doesn’t move 20 feet stylistically from the Static-X brand, this particular track will scratch your circuit-encrusted itch just fine.

“Burning Inside” – The Crow: Salvation soundtrack

Burton Bell from Fear Factory bogarts the mic on this cover version from one of Static’s idols, Ministry. Static and Bell’s take on the best song from The Mind Is A Terrible Thing To Taste shows both great homage and their own metallic fury, as well.

This song goes on the list by virtue of the overmodulated, double-kick jackhammers in the intro, which already makes it cooler than anything Static’s heroes were trying to conjure at the time.

“Gimme Gimme Shock Treatment” – Beneath… Between… Beyond…

Originally slated for inclusion on the Ramones tribute album We’re A Happy Family, it’s a damn shame it wasn’t. On your next playlist, follow this with Metallica’s cover of Queen’s “Stone Cold Crazy.”

“I Want To Fucking Break It” – Start A War

The cartoony tuba sample loop will make you think Static was making a homage to your grandma’s favorite German drinking songs. But this one’s an unrequited, bone-snapping classic, from Static’s barking of the title to the guitar feedback squeals that sound cooler than ambulance sirens in Hell.

With all the furious riffage going on throughout this list, this vista of ugly ambiance feels like a good place to end. The legend goes that this song was written during Static and drummer Ken Jay’s stint in a band called Deep Blue Dream that featured Billy Corgan in his pre-Smashing Pumpkins days. The song feels like horror-comic character John Constantine walking the streets of the underworld looking for the meaning of life under volcanic rocks and the foundations of bombed-out buildings. Battered but not quite broken, unsightly yet somewhat serene. Rest in peace, Wayne.