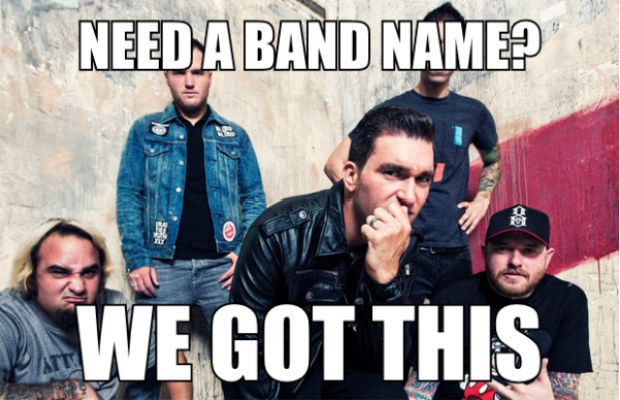 A band’s name is one of their most important and definable characteristics. It will forever be inscribed on the albums and merchandise they release. Memorable names can be the difference between someone taking the time to look you up or scrolling by.

It comes as no surprise that many musicians name their bands after songs or lyrics they are inspired by. Not only does it leave your band with an awesome name, but it helps keep the song you love alive. Here are 11 bands whose names come from songs.

All Time Low
From: “Head On Collision” by New Found Glory
“And it feels like I’m at an all-time low”

After debating over several names, including Playground X (a level from the popular first-person shooter game Counter-Strike), it seems fitting that a band who started off playing blink-182 covers would end up with a name inspired by from the line of a song by another iconic pop-punk band.

Panic! At the Disco
From:“Panic” by Name Taken
“Panic at the disco, sat back and took it so slow”

Though the band were originally torn between this and the line “burn down the disco” from the Smiths’ “Panic,” they eventually chose the name that we just can’t imagine them without. Adding that ‘!’ only made it more memorable, and you can’t help but wonder if Burn! Down The Disco would have had the same ring to it.

Like many other pop-punk bands, the New Jersey quintet were influenced by Blink-182. “Man Overboard” first appeared on Blink’s live album The Mark, Tom And Travis Show and was later featured on the band’s Greatest Hits.

New Found Glory are experts at releasing catchy albums that remain stuck in our heads for years, jumping around onstage like they’re on an oversized trampoline and helping new pop-punk bands come up with their names. “The Story So Far” is the final track on NFG’s third album Sticks And Stones.

The Bonzo Dog Doo-Dah Band’s song “Death Cab For Cutie” was made popular after being featured in The Beatles 1967 film Magical Mystery Tour. With the backing of the Beatles and with such a catchy name, it was only a matter of time before a band would make the name their own as the Washington-based indie-rock group did when they formed back in 1997.