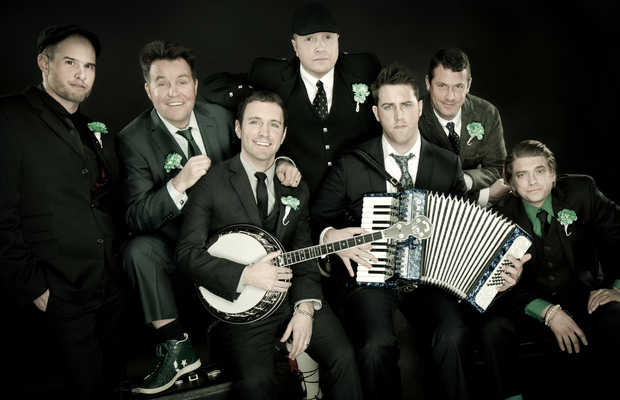 St. Patrick’s Day isn’t all about green beverages and pinching the humbugs. Here’s a few great artists out there keeping the spirit of Celtic punk alive all the year through. Check out our favorites and get your jig on in the pit!

Kicking up the clovers since ’96, these Massachusetts men are as emerald as you get. They perform weeklong extravaganzas every St. Patrick’s holiday and wear their Irish pride on their—tattoo—sleeves. The mighty anthem “I’m Shipping Up To Boston,” off 2005’s The Warrior’s Code, has become the rallying cry for the Boston Red Sox. (It’s also the reluctant walk-on music for Wisconsin Gov. Scott Walker, which the Murphys are trying to change.)

In the vid for Flogging Molly’s signature tune, “Drunken Lullabies,” the star brandishes a belt buckle that reads “Proud To Be Irish.” These rabble-rousers, led by Dublin native Dave King, got their start in Los Angeles pub Molly Malone’s and took over the world, one Warped Tour at a time. The collective features tin whistles, banjos, mandolins and storytelling skills you simply can’t find on this side of the pond.

Shane MacGowan is the OG Celtic punk. All busted teeth and rambunctious glimmers in his eye, his band put this particular style of music on the map in the 1980s. MacGowan is an essential antihero known for his devil-may-care attitude, penning songs such as the subversive “Fairytale Of New York” that’s as beloved as “Anarchy In The U.K.” The Pogues are a snarling entity through and through— their name comes from the Irish phrase meaning “kiss my arse.”

If you’re planning on seeing Dropkick Murphys on their 2015 tour, be sure to arrive early for Blood Or Whiskey. Their catalog tends to be more diverse than those of their fellow Celtic punkers. Check out 2014’s “Gone And Forgotten,” a catchy track that incorporates brass and Clash influences.

Named after the British coins that became worthless after Ireland earned its independence (and the common slang for “loser” across the pond), the Tossers have been making indelible Celtic rock since 1993. Vocalist and mandolin player T. Duggins, his accordionist brother, Aaron, and a cavalcade of Chicago’s finest soak their songs in whiskey and raise a glass to the good times. They’re among the groups setting sail on Flogging Molly’s Salty Dog Cruise March 13-16.

Who said the accordion was geeky? Put it in the hands of the Mahones’ Katie “Kaboom” McConnell and she’ll shut up the naysayers. She pummels the squeezebox like a prizefighter— appropriate, since the Mahones’ song “Paint The Town Red” was the soundtrack for Mark Wahlberg’s final bout in The Fighter. Theirs are impeccable Irish flavors by way of the great white north of Canada.

You’re sure to find a lot of fiddles in the Texas music scene, but not like the one featured in Blaggards’ barnstormers. Irishman Patrick Devlin hunkered down in Houston two decades ago, and after doing time in a few different bands, he formed Blaggards. The commanding violin of Brittany Johnson, the stomping beats of Michael McAloon and the mad rhythm of Chad Smalley help Devlin bring to life traditional Irish songs with punk-rock furor.

The backbone of their sound may be the Scottish bagpipes, but Flatfoot 56 play plenty o’ St. Patty’s Day events. This year, they’re also getting “Shamrocked” at a California Celtic punk fest in September, thanks to their sing-along choruses and crisp guitar work. Frontman Tobin Bawinkel has the crooning style of Tim Armstrong and the good nature of your favorite local bartender. We tip our caps to songs like “Courage,” off 2010’s Black Thorn.

One of the mellower bands on this list, the Young Dubliners still pack a punch. These road dogs will travel as far as Alaska to get their green on in concert, delivering a kind of Celtic punk that won’t alienate mainstream music fans. Over the course of their 27-year existence, they’ve had tunes appear on Sons of Anarchy and opened for everyone from Jethro Tull to Collective Soul. Their latest head-bobbing album, Nine, came out in March 2014.

These Boston boys truly put the punk in Celtic music: Their “Irish” versions of classic Ramones tunes put them on the map. (And hey, even Tommy Ramone has joined them onstage!) They’re definitely accomplished musicians, but the Gobshites play off those drunken Irish stereotypes and make their instruments sound like they’ve had too much Guinness. They’ve been known to play entire songs on their backs, just to get a laugh from the crowd.

Waving the Celtic punk flag since 1992, Vancouver's Real McKenzies have more than a few Scottish influences, but remain frequent participants in St. Patrick's Day festivities. Singer Paul McKenzie raises a chalice full of “punch & haggis” to high-energy, seafaring tunes and burly comradeship. The crew are setting sail with a new album called Rats In The Burlap, with assistance from Fat Mike of NOFX. It's their eighth studio release.