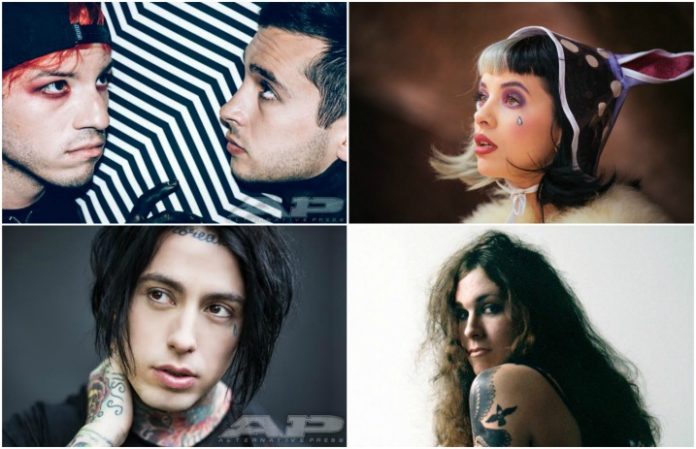 Many musicians sport artwork on their skin, but let’s be honest: Quite a lot of the art doesn’t have much of a story.

While it’s fine to have tattoos that are cool for the sake of looking cool (and there are some that are totally killer), it’s also interesting to hear the stories and meanings behind the ink.

Here are 11 musicians’ tattoos and the stories behind them:

Against Me! singer Laura Jane Grace blacked out her previous arm tattoos in an eight-hour session. She talked about it in an interview with Dazed: “I didn’t originally intend to cover up every single tattoo, but once they started one thing led to another. To be able to wipe the slate clean is oddly refreshing. It’s black now, but the black will fade, and I’ll be able to tattoo onto the black. I don’t ever want to stop shape-shifting.”

Radke got this strange tattoo on an episode of LA Ink—it’s a frog riding a horse, saying “Ahoy, Butternuts!” He fed the artists a story about how the tattoo was in memory of his horse who died from eating trash. He seemed to be challenging the tattoo artist to see if he would actually do it. Why not, right?

Tyler and Josh of Twenty One Pilots got matching tattoos onstage once. The image is a small “x,” meant to symbolize the dedication of their fanbase in their hometown of Columbus, Ohio.

Martinez explained in an interview with Fuse that she got this tattoo in remembrance of her first pet. Her family had to give the rabbit away to a new family, where it then escaped. The new family later found the bunny’s decapitated head in their lawn; this is why Martinez’s tattoo has a knife under the rabbit’s throat. RIP.

5. Matt Healy: Tribute to his grandma

Even though Healy’s grandmother didn’t like his tattoos, he still got this tribute to her after she died. In this interview with Ash London Live, he said that he waited about 16 hours after her death to get the large tattoo on his chest.

6. Alex Gaskarth: Tribute to his brother

Is there a miw video coming out today or is it just the song?

Gaskarth’s brother Tom passed away when the two were still in high school, and Gaskarth got a rose tattoo on the back of his hand with the initials “T.E.G.” next to it.

Another LA Ink creation, Skiba had this done to honor one of his favorite movies, This Is Spinal Tap, and a rained-out Warped Tour date in Cleveland in 2007. On the show, Skiba talked about how he wanted a rock ’n’ roll tattoo to commemorate his many years on the road with Alkaline Trio.

Many thanks to @mezaframtattoos and everyone at @eurekarebelliontrading for having us and taking such good care of everyone last night! I had such a blast Xofrnk (photo by @brightsidefilm)

The story behind Iero’s scorpion is pretty punk rock. In the Life On The Murder Scene documentary, he reveals that when he joined My Chemical Romance, he got the tattoo on his neck that was so visible so no one would hire him. It all worked out, though.

As admitted in an interview with MTV, Wentz had made a promise to Saporta that he could pick a tattoo to put on him if Good Girls Go Bad went platinum. Gabe chose a self-portrait and Wentz got a large tattoo of him on his leg.

Telle’s entire arm is covered in family and childhood-related images. It includes an “Ohio” tattoo and his area code number (Smith grew up in Dayton). Then there’s also an image of The Nightmare Before Christmas, which is his and his mom’s favorite movie.