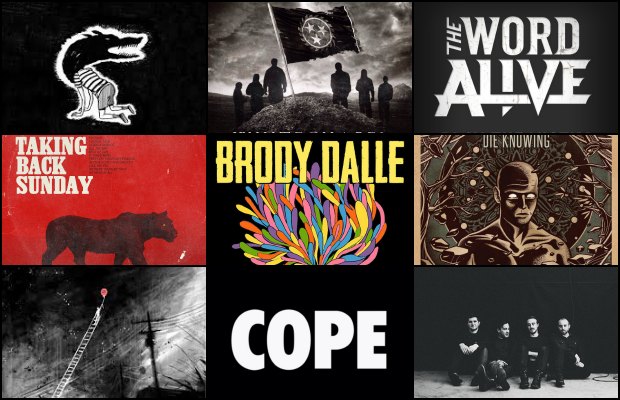 Sometimes the rock world can get noisy, and we don’t just mean in decibels or fuzz. Often the signal-to-noise ratio is more noise than signal. But no worries; we read, listen to and watch everything so we can sort it for you. Here are some of our favorite new songs and videos of March 2014.

“Duct Tape,” a former Bone Palace Ballet scrap, transformed into what is arguably the best track on Chiodos’ new album Devil. The song beckons and promises, seducing a resistant party with the notion that they can attain everything they want if they simply let go. The song, with its sinister tone, taps into the fear and self-doubt that so often holds people back. Shh… “You’ve got your insecurities/But I’ve got my duct tape.” —Cassie Whitt

It kind of sucks being in a hardcore band past two or three albums. The genre is pretty stagnant, which is why so many groups barely get out an EP and a full-length before breaking up (then waiting five years and ca$hing in on the next batch of b9board.com posters overpaying for old crewnecks on eBay). Comeback Kid are 14 years, five albums and two singers deep into their career, but they keep on going, doing their best to make hardcore fun. The closing number on their new record, Die Knowing, “Sink In,” is one of their longest songs ever (four minutes can feel like an eternity at a VFW hall show, y'know?), but the momentum never stops thanks to chugging, major-key guitars and nonstop gang vocals. —Scott Heisel

It starts off fairly steady with some staccato drum beats and a warbly guitar. Then Brody Dalle’s voice kicks in at the 35-second mark—haunting and slightly drowsy, like she rolled out of bed after a late night and stumbled into the recording booth. Things eventually pick up at the halfway point with jacked up guitars and quick-paced alternating “ohhhs” and “oohs” from Dalle and Shirley Manson, who sings backup. The whole ordeal is great enough to make me forget that I have absolutely no idea what Dalle means when she sings, “Organ mouse, silk blood spouse/Exsanguinate the fears.” —Brittany Moseley

The valedictorians of creative pop-punk are back! After building a mountain with 2011’s Gospel, they scale it again on Oh, Common Life. “Flies On Tape” made the cut with the jab-jab-punch guitars and imaginative vocals we've come to love from these Michigan gentlemen. —Brian Kraus

With Manchester Orchestra's fourth full-length, Cope, looming just around the corner, the title track helps further paint a picture of what we can expect. Following heavy and riff-laden lead single “Top Notch,” and the poppier, more upbeat “Every Stone,” “Cope” is a dark, melancholy turn that lands somewhere in between them. After an intro so face-meltingly heavy it sounds like it's gearing up for a metal song, “Cope” launches into a surprisngly stripped-down, verse, relying on dynamics in juxtaposition with singer Andy Hull's initially reserved, then increasingly aggressive and frantic, singing style to haunting results. Between its thick arrangement, somber focus, and raw production style, “Cope” sounds like it could be a b-side from Brand New's The Devil And God Are Raging Inside Me, and that's one hell of an accomplishment in my book. —Philip Obenschain

THE MENZINGERS – “I Don't Wanna Be An Asshole Anymore”

The Menzingers have a tough task in following up 2012's beloved On The Impossible Past, but, if latest single “I Don't Wanna Be An Asshole Anymore” is any indication, next month's Rented World is destined for equal acclaim. While first single “In Remission” saw the band take a calmer, more introspective turn, “Asshole,” the album's opener, is a more aggressive and earnest return to form. The Menzingers are at their best when it feels like frontman Greg Barnett is on the verge of falling apart, but, sooner or later, everyone has to find some sort of stability, and “I Don't Wanna Be An Asshole Anymore,” an anthem about recognizing bad habits, at least feels like a step in a positive direction, without sacrificing any of the fire or frustration at his core. —Philip Obenschain

CHUCK RAGAN – “Something May Catch Fire”

There’s your standard middle-of-the-road radio-ready country music, and then there’s the kind of “country” music Chuck Ragan plays: a little bit country with a heavy dose of rootsy Americana and good, old-fashioned rock ’n’ roll, all delivered with Ragan’s signature raspy drawl. “Something May Catch Fire,” the album’s opener is a boot-stomping sing-along that sounds like a mix between Bruce Springsteen and Johnny Cash. Feel free to don a cowboy hat while you listen, if that’s your thing. —Brittany Moseley

Where the hell did these guys come from? Tucked away in Tiny Engines’ hand at the poker table, I guess. One minute they're a band you've never heard of before, three hours later you realize you need to call an addiction hotline to put the album down. If bands like Polar Bear Club, the Dangerous Summer and Fireworks warm your heart, make some room for Temple Of Plenty. —Brian Kraus

My feelings are still mixed on Happiness Is, but according to internet commenter Corey Bockhaus, I have “destroyed all journalistic credibility” because I think New Again is TBS's best work. So, whatever: Ignore that jabroni, and listen to this song, the best work on the new TBS record (but still not as good as New Again's best songs). When Adam Lazzara is willing to dig deep lyrically, brilliant music is almost always the end result. —Scott Heisel

We recently premiered Whitechapel’s “Mono”—the second single off their upcoming album, Our Endless War—where the band dish out a bare-bones thrashing of good ole utilitarian deathcore. Vocalist Phil Bozeman barks and growls in a never-ending chain of vocals, driving the song with the tenacity of a cranky junkyard dog at the sight of trespassers. I have no idea what the hell this man is saying, but he sounds pissed. —Matt Crane

THE WORD ALIVE – “Play The Victim”

Instead of exploding in typical ballistic TWA fashion, “Play The Victim” ripples with a dark current and a soundscape that’s both fluid and vast like some tainted body of black water. “You’re the one who always falls apart/The one who plays the victim,” a restrained Tyler “Telle” Smith taunts, slowly creeping into the composition with a hunter’s resolve. It’s a hit job, and the Word Alive are taking their time, building into a lyrical assassination on deceptive human character with the sincerity of “snowflakes in the summer” or “icicles in spring.” As the first single from the band’s new album, the track definitely feels like a calm-before-the-storm moment of tension. —Matt Crane