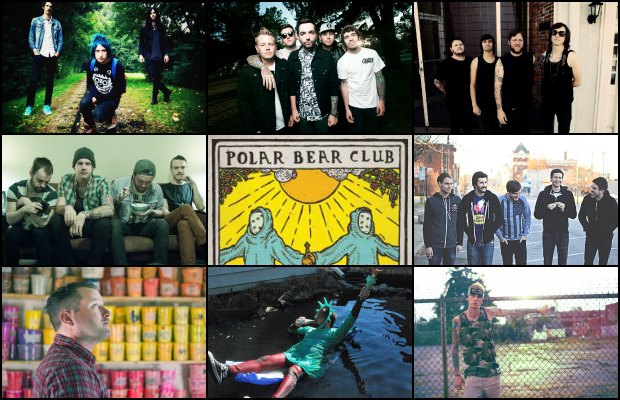 Sometimes the rock world can get noisy, and we don’t just mean in decibels or fuzz. Often the signal-to-noise ratio is more noise than signal. But no worries; we read, listen to and watch everything so we can sort it for you. Here are some of our favorite new songs and videos of November 2013

A DAY TO REMEMBER – “Same Book But Never The Same Page”

The long awaited physical copies of ADTR’s Common Courtesy have been released along with three new songs, one of which is “Same Book But Never The Same Page.” At first listen, I thought that this was another classic power ballad from A Day To Remember, until about 3:19 when the band slam a final breakdown on the listeners to conclude their highly anticipated album, giving them something to remember. [AS]

There have been rumblings about a new Against Me! album all year, and finally, last month the Gainesville punk band announced their sixth full-length, Transgender Dysphoria Blues, out January 21, 2014. Frontwoman Laura Jane Grace released an acoustic version of the album’s first single, “FUCKMYLIFE666” way back in July, but it’s the full-band version that really brings the song to life. Clocking in at a quick two minutes and 49 seconds, the song has the same feel—although not the same sound—as the band’s pre-White Crosses material. Then again, maybe it’s because the last album came out three years, five months and 19 days ago. Not that I’m counting… [BM]

Yes, I am aware that I am breaking my own rules by listening to Christmas music before Thanksgiving, but Bad Religion have done some groundbreaking stuff with their Christmas Songs EP, even donating a portion of the proceeds to SNAP, a non-profit that helps survivors of sexual abuse by priests. As ironic as it may seem, Bad Religion makes me leave my Scrooge-y sentiments behind with their punk perspective of traditional holiday tunes. If they would play this EP over the PA system in malls, I might actually enjoy Christmas shopping. [AS]

Williamsburg's finest lyseric-pop combo returned with an engaging lyric video to accompany their latest single. A weird lattice of contradictions (lush but quirky, playful yet bold) held together with enough sonic elements to give an indie record store owner a stroke (Johnny Marr playing Stereolab's Moogs, anyone?), “Giants” is grand in its execution, coy in its delivery and positively obtuse lyrically. When frontman Dylan Rau delivers sexy non sequiturs like “You are loving me whether you want to or not/I want you for sure/I am loving you more,” it's hard not to fall under his spell. It's the song John Cusack should be playing on external speakers hooked to his iPod for the sequel to Say Anything. Perhaps it's only the song playing in your head when you randomly walk up to someone and kiss them. While that action will get you arrested, Bear Hands' bar-raising pop will take your heart into custody. [JP]

BEARTOOTH – “Go Be The Voice”

Derby, U.K.’s LostAlone are an acquired taste. Those not versed in their “riffology” (a sound that falls at about a 10 on the grandiose scale) may find their full-tilt, multi-vocaled, seven-stringed sensory overload a bit much. (Weaklings.) With “The Bells! The Bells!!,” the first glimpse at their upcoming album (title and release date TBA), the band prove that they haven’t relented–even on a track a wider audience may find accessible. With two full-lengths behind them, LostAlone appear to only be getting better, which is a thrilling relief. [CW]

Where were you when you first heard “Swing Life Away” by Rise Against? For me, it was the dead of Michigan’s snowy winter, and I was sitting on a cigarette-burned couch at a high school party, chatting warmly with a cool chick. Some bro with long hair and a Volcom beanie busted out an acoustic and attempted to swoon the entire party with his own rendition of the track. People cringed. Still, the song’s live-for-the-moment gush completely washed over me. When we premiered the video for MGK’s version featuring Kellin Quinn’s banshee chorus, the internet cringed. But the cover still hit me with the same feel-good sentiment, and MGK’s added bridge gave the song new life: “Sometimes I don't want to fucking wake up/When all they want to do is bring me down/And all the things I’ve went through as I came up/Are the fucking reasons why I run this town.” [MC]

I honestly don't get what the big hubbub is all about regarding Jimmy Stadt's voice on the new Polar Bear Club record. Sure, it doesn't sound as dirty as it did, say, four years ago, but that's to be expected. If anything, we should be surprised his voice has gotten sweeter with age, as usually it's the other way around. “For Show” is my favorite track off the new PBC record; it reminds me of a weird, successful mix of Transit and Rise Against, and that makes me a very happy panda indeed. [SH]

MATT PRYOR – “Kinda Go To Pieces”
“Kinda Go To Pieces” sounds like it was unearthed from a time capsule buried in between the release of the Get Up Kids' Something To Write Home About and On A Wire. It's got a great Midwestern twang to it with a damn-near-perfect descending guitar part in the chorus and a real fun vocal melody (and you gotta love those self-harmonies). Goddamn, Matt, who knew you still had songs like this in you? [SH]

REAL FRIENDS – “I Had A Heart”

Leave it to Real Friends to write a sad song/mad song/love song masquerading as a Christmas song. If you didn’t know the song was on Punk Goes Christmas you might think it’s just another great pop-punk song that you overlooked from the Chicago band’s myriad of EPs. I’ll totally understand if you keep listening to this song long after the Christmas lights are down and that ugly sweater from your Aunt Helga has been returned. [BM]

REGGIE AND THE FULL EFFECT – “To The Fruit Wizards Of Donnington”

Flashback: It’s 2007. Megadeth have left the stage at Download Festival in Donington, U.K.. My Chemical Romance, in full Black Parade regala, take their place in front of a sea of metalheads infuriated that any band are headlining over their precious metal messiahs, let alone“those emos.” This song is that infamous bottling from James Dewees’ POV with a twist–these are not just metalheads, they’re wizards who are inexplicably equipped with fruit to catapult at his head. Dewees spends three perplexed minutes imploring they stop and asking for answers as why they’re doing it in the first place. Watch this while listening for, ahem, “the full effect.” [CW]