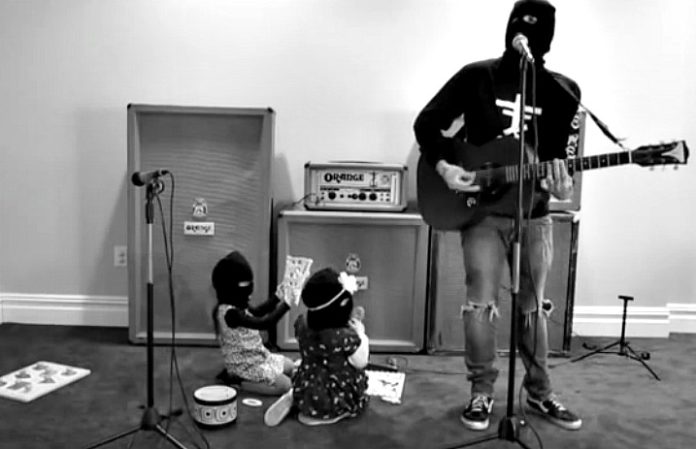 Musicians may spend a majority of their time touring the globe and living in studios trying to make a name for themselves but back home, some of them are known as Dad. Sometimes those two worlds collide and produce sweet, music-filled moments. In honor of Father’s Day, we compiled the best collaborations between musician fathers and their children.

I know I’ve been away for a minute, but I’ve been working on my new a capella dubstep side project. #dropyourphone

William Beckett’s daughter, Genevieve, makes a regular appearance throughout his social media posts, but none are as great as the duo’s take on this “new a capella dubstep side project.” While Beckett is clearly not dropping the bass anytime soon, this goofy little tidbit still makes for a rad father-daughter collaboration.

When Anthony Green isn’t busy with Circa Survive, Saosin or his array of other past and present projects, he apparently covers Christmas songs. This cover is extra special because it features his then 3-year-old son, James, offering an almost unbearable level of cute.

Lights and Beau Bokan’s daughter, Rocket, has already tapped into her musical genes. This was proven in a clip the blessthefall frontman posted of him singing Frozen’s “Let It Go” with Rocket adorably chiming in.

Green Day’s Billie Joe Armstrong has two sons who are both following in the footsteps of their father. The youngest is releasing music under the stage name Jakob Danger, and the oldest, Joey, is the drummer for SWMRS. Because of this, it’s no shocker that Joey would join his dad and Green Day guitarist Jason White for a secret show in 2014 where the trio called themselves Two And A Half Men and played tracks from Green Day’s early discography.

Pixelated video of @maxbemis dancing with the girls to the new @sayanything album (his band) streaming for the first time tonight. Check out @sayanything’s site for the link ������ #idontthinkitis

Say Anything’s Max Bemis welcomed baby No. 2, Coraline, with wife and Eisley vocalist Sherri Dupree-Bemis last year. Coraline and big sis Lucy obviously make the perfect dance partners and audience for any of Max’s creations including Say Anything’s latest, I Don’t Think It Is, on the eve of its release.

Twenty One Pilots better watch out, because Frank Iero’s ski mask-wearing duo consisting of twin daughters Lily and Cherry are pretty awesome, too. In addition to appearing in the video, the girls helped Iero pen the track and chime in on backup vocals. The original announcement of the song back in 2014 also explained that all proceeds from the sales of the track would go toward the twins and brother Miles’ college funds, which basically makes Iero the best dad ever.

my daughter grew up and became my best friend.

Machine Gun Kelly may be a rapper, but rock influences can be heard throughout his tracks, so it’s always cool to see him whip out the guitar and strum a few chords. The added bonus was his daughter Casie leading the way on covering Lukas Graham’s Top 40 hit, “7 Years.”

Montreal’s Osheaga Music Festival experienced a cuteness overload in 2015 when Weezer frontman Rivers Cuomo invited two very special guests on stage during the band’s set: his 8-year-old daughter, Mia, who joined in on keyboard for “Perfect Situation” and 3-year-old son Leo strummed along to “Back To The Shack” on his inflatable guitar.

Sleeping With Sirens frontman Kellin Quinn’s daughter, Copeland, has plenty of adorable moments across his and wife Katelynn’s social media accounts, but none can top this silly routine from a few years back where Copeland mimics Kellin.

Keys has been helping me get my end of the demos finished up. #KeatonApproved

Taking Back Sunday are busy working on the follow up to 2014’s Happiness Is, but that doesn’t stop frontman Adam Lazzara from sharing demos with oldest son, Keaton. Clad in a tie-dye tee and toting a stuffed Winnie The Pooh, Keaton headbangs and dances around, clearly approving of his dad’s latest track.

Jamming on a new song he wrote.

Blink-182’s Mark Hoppus often posts an array of ridiculous facial expressions courtesy of his son, Jack, but this softer moment of him sharing a song he wrote with his dad is refreshing (even if we have to use our imagination when it comes to what it sounded like).