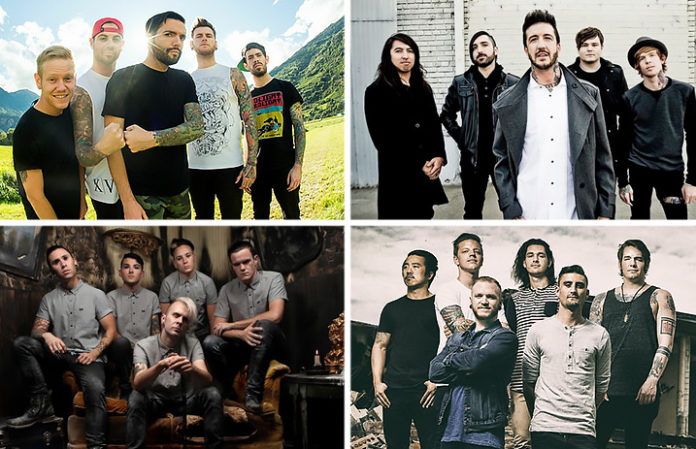 For many people, genres like metal, punk or hardcore are an acquired taste. You can't always jump straight from listening to Bieber singles on the radio to blasting August Burns Red. And just like learning how to drink black coffee or whiskey neat, newcomers to alt music tend to have to ease their way into the plunge.

For anyone trying to get into heavier genres like metalcore or simply wanting to introduce EDM-obsessed and classic rock enthusiast friends to the scene, here are some notable starter tracks.

“Glad You Came” by We Came As Romans

Cover songs of Top 40 hits are always great go-tos for new metalheads.  With We Came As Romans' cover of this hit by the Wanted, you get a cool familiarity mixed in with some of the harsher vocals provided by David Stephens. And who knows? You might even like the edginess of this version better than the original.

“Would You Still Be There” by Of Mice & Men

Of Mice & Men broadened their horizons with the 2014 release of Restoring Force and added a plethora of alt-rock and grunge undertones separating them from the generic djent sounds of metalcore. “Would You Still Be There” relies heavily on Aaron Pauley's melodic vocals and groovy bass line—an instant attention grabber for anyone new to the genre—with the track rounded out by Austin Carlile's screechy backing vocals. (Did you end up loving this song? You can vote for it to win Song Of The Year in the APMAs…)

“Downfall Of Us All” by A Day To Remember

A Day To Remember are a staple in the mainstream-meets-metal world. They combine catchy pop punk with the heavy breakdowns of metalcore, making the majority of their discography an easy transition from radio rock to the underground. Chances are many non-metalheads already have at least one ADTR track on a Spotify playlist somewhere, so why not add one more?

Parkway Drive switched up their sound to encompass a more hard rock feel with their latest release, Ire, but they still held up their fierce attitude with tracks like “Vice Grip.” Touching on sounds reminiscent of nu and groove metal, “Vice Grip” has one of the most memorable riffs on this list and is sure to help keep a listener intrigued well beyond the song’s hook.

“Soul” by the Ongoing Concept

The Ongoing Concept have a whole lot of twang coming out in this track. With hints of country paired with 2008-screamo-style vocals, this track isn’t one of the heaviest metalcore numbers on this list, but it is a surefire way to get into a band that is shaking up the way we look at the genre.

“Sleepwalking” by Bring Me The Horizon

Bring Me The Horizon's 2013 release Sempiternal took a huge jump from their aggressive deathcore beginnings toward the slightly more marketable metalcore. While nowhere near as heavy as they once were, “Sleepwalking” still has substantial weight behind the indie-electro vibe, making it a great entry point for the genre.

“Digging” is poetic in its sophisticated lyrical content, structure and style.  The clean vocals and melody are paired perfectly with Davey Muise's raspy vocals as the track slows down the standard tropes of metalcore, making for a more digestible listen for someone who hasn't experienced unclean vocals before.

Northlane are definitely the most eclectic band on this list. Combining spacey tones with aggressive guitars and well laid-out transitions, “Rot” works as a sturdy foundation for anyone interested in the more atmospheric/trance side of the genre.

“The Weigh Down” by the Amity Affliction

The Amity Affliction are masterminds at creating instantly memorable choruses that pair well with harsher verses, and “The Weigh Down” is a golden example. This track kicks off with a little punch so it's a good segue into the more abrasive regions of metalcore.

Much in the same vein as the Amity Affliction, “Toxic” uses unclean vocals for the verses with a clean chorus that will be stuck in your head all day. My Enemies & I are a leap further into the genre than the rest of this list, but they are a solid depiction of everything metalcore is about, from unique yet tangible backing riffs to crisp but weighted vocals.

While not technically metalcore, Breathe Carolina relies heavily on unclean vocals and heavier instrumentals for this track, simultaneously creating a trance-meets-electronica vibe perfect for any EDM fan looking to add a little spice to their music library.

QUIZ: Do you remember the lyrics to BMTH’s “Chelsea Smile”?