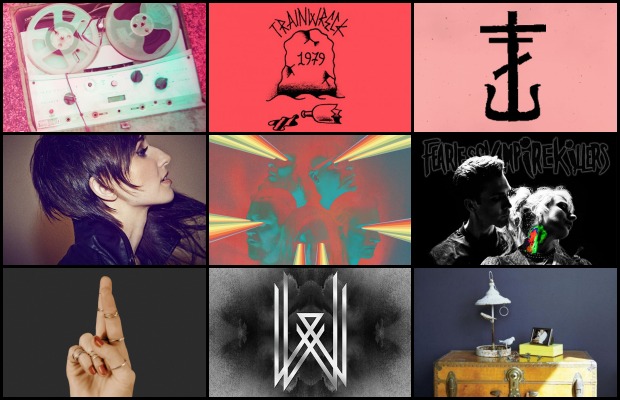 Sometimes the rock world can get noisy, and we don’t just mean in decibels or fuzz. Often the signal-to-noise ratio is more noise than signal. But no worries; we read, listen to and watch everything so we can sort it for you. Here are some of our favorite new songs and videos of July 2014.

As ’68, Josh Scogin and Michael McClellan bring the noise, the volume and the tightness on their debut album, In Humor And Sadness. But it’s the album’s first track where memories of forgotten Sub Pop and Touch And Go singles collide with hints of deconstructed rock and guitar noise (even some synthesizer molestation) so violently, the studio had to smell like  television sets on fire. The indie types can do the head-nod to ‘68’s mania, while the hardcore true believers can start a pit or three. But if you do nothing with this duo as your soundtrack, follow the example of your head and get to the point, already. –Jason Pettigrew

THE AMERICAN SCENE – “4th And Broadway”

Fair warning: There are few similarities between the first single from the American Scene’s upcoming sophomore album, Haze, and the songs on their 2012 debut. In fact, if it weren’t for Matt Vincent’s distinct, deep voice, you might think you were listening to two different bands. I’ll admit, I was hesitant about their new sound at first, but I’ve made it through the haze (ha! puns!) and come over to the other side. “4th And Broadway” balances dark, moody lyrics with upbeat, smooth guitars, creating a sound that’s more spirited indie rock than despondent emo, and, dare I say it, even a bit dance-worthy. It sounds like a crazy statement, but it works quite well in this case, much like the American Scene’s new sound. –Brittany Moseley

Now that the release of Lowborn has come, the conclusion of Anberlin is not only that much closer, but that much more comprehendible as well. While Lowborn boasts perhaps some of the most irrefutable material of the band’s career, it’s on “Hearing Voices” where they show their truest, most vibrant colors. The track intertwines its way in and out of frontman Stephen Christian’s soaring vocal arrangements, especially during the pre-chorus where he revealingly croons, “Everyone wants to know God/But they’re afraid of what they’ll find/Everyone wants to know God/But they want to live like He died.” Christian is supported by Nate Young’s immaculate drumming and the song’s ethereal, anthemic backbone. While “Hearing Voices” is far from similar to a majority of the band’s early material, it’s simply a conglomeration of what they have become over the past  12 years: a band that will not soon be forgotten. –Tyler Sharp

Since their surprising reunion a few years back, and the subsequent intermittent tour dates and festival appearances that followed, fans of Death From Above 1979 have hoped for a new album. Now, 10 years after the duo’s one and only full-length, it’s finally set to arrive. While The Physical World won’t land until September, our first taste, “Trainwreck 1979,” picks up right where the noise rockers left off 10 years ago. It’s every bit as thumping, punk-tinged and groove-laden as I could have hoped for, and, though more restrained than some of the group’s other material, I have a feeling that DFA1979 have a lot more surprises in store on their sophomore release. –Philip Obenschain

Every Time I Die’s latest album, From Parts Unknown, goes far to carve thick notches into the veneer of the planet’s heavy music scenes. “Idiot,” the final track on the album, delivers a hellish maelstrom of energy (thank you, drummer Ryan Leger) and downright sociopathic rage from frontman Keith Buckley. “From my skin, I emit flashing lights/In my eyes all you find are flashing lights/From my mouth, every sound a warning bell,” he dictates, like some kind of psychotropic hellion as the band powers up for maximum concussion and a breakdown perfect for breaking limbs. If more bands bled gasoline like these dudes, this scene would burn five times as bright. –Jason Pettigrew

The two times I’ve spoken with U.K.’s Fearless Vampire Killers since last fall, the band promised their upcoming album, produced by William Control, would give fans more to dance to. They deliver on that in the most literal way possible with their first single, which maintains the same layered complexity FVK fans love with a more constant rhythm and less cacophony, making it welcoming of both movement from their audience and ears of new listeners. –Cassie Whitt

While we had heard some rough samplings of what may have been to come for Frank Iero’s debut solo album, “Weighted” provides the first real polished look at Stomachaches, but “polished” may not be a word that will ever end up in a description of Iero’s signature grimy, discordant sound ever again. Iero drones thoughtfully during the verses before the “fuck it” chorus kicks in, showcasing his knack for writing an earworm melody with the upbeat invitation: “Let’s laugh/Let’s learn to laugh at ourselves again/And let’s love/Let’s hate what our love makes us do,” and it suddenly feels like you’re holding a drink high at some basement punk show, singing gang vocals with 10 of your best friends. Keep your eyes peeled for the premiere of the video for this song, which Iero has been teasing via Instagram, Monday, Aug. 4. –Cassie Whitt

Is there a label out there that’s had a better 2014 than Epitaph has thus far? They’ve put out serious gems from Every Time I Die, This Wild Life, Plague Vendor, the Lawrence Arms and my personal favorite, the new album from ADD-addled indie punks Joyce Manor. My favorite cut off the 10-track, 19-minute Never Hungover Again has to be “Falling In Love Again,” and not just because it’s the longest track on the record (a whopping 2:21, which might as well be a Mars Volta cover for this band, length-wise). It commits to its rolling bassline and half-time drums from the get-go, with jangly guitars and Barry Johnson yelping through the verses before delivering a syrupy-sweet, perfectly harmonized “We’re falling in love again” for what sounds like the song’s chorus (as with most Joyce Manor songs, they rarely revisit parts). —Scott Heisel

In the time since her last album, Siberia, Canadian synth-pop songstress Lights not only wed Blessthefall frontman Beau Bokan, but also welcomed their first child, Rocket Wild Bokan, into the world. So, understandably, she’s been busy. However, the singer is finally poised to make a comeback, recently announcing her third full-length, Little Machines. Its lead single, “Up We Go,” is an anthemic romp about dealing with hardship, but looking ahead optimistically. Tegan And Sara-esque in its style and catchiness, the track lands somewhere in between Lights’ more straightforward debut, The Listening, and her more experimental sophomore release. –Philip Obenschain

There’s a constant stream of music floating around my inbox and on my desk, so when something new catches my attention, it’s a pretty great feeling. There’s a very good chance you haven’t heard of Living Room. The Brooklyn band haven’t even cracked 1,000 Facebook likes, but I have a feeling that will change once their debut album, Moonchaser, comes out next month. They’ve got one toe in pop-punk and another in the very populous waters of the emo revival, creating a sound that’s earnest, raw and just aching for sing-alongs. Don’t pass them over. –Brittany Moseley

ANDREW McMAHON IN THE WILDERNESS – “Cecilia And The Satellite”

Andrew McMahon reminds us why the world needs his voice on “Cecilia And The Satellite,” the debut single under his new moniker Andrew McMahon In The Wilderness. The track brings classic McMahon—warm piano melodies and convincing, soulful crooning—but also bursts with a new pop element (at times, reminiscent of fun.), especially when the SoCal singer shouts, “If I could fly” over thumping percussion in the grandiose chorus. It’s kind of late in his career, but McMahon seems poised to break out. –Matt Crane

Real Friends get a weird amount of shit not only from stuffy bloggers but from folks within our own scene who somehow decry what the band do as not being “original” or “authentic” enough for their liking. Well, tough shit, guys: “Loose Ends” is a fucking beast of a song, the kind of pop-punk rage jam every band tries to write and which few actually succeed. I can’t wait for Maybe This Place Is The Same And We’re Just Changing to make its mark on the scene, and I’m not the only one: There are about 2,000 or so people at Warped Tour every day who agree with me. –Scott Heisel

With As I Lay Dying in ruins, former members Nick Hipa, Phil Sgrosso, Josh Gilbert and Jordan Mancino have created the already well-oiled machine that is Wovenwar. On their latest single, “Profane,” the band hit with a thunderous blast of fists-in-the-fucking-air anthemic rock. AILD fans may be apprehensive about the radio-rock direction (and singer Shane Blay’s clean vocals, for that matter), but all shall soon convert: Wovenwar make catchy music that’s fun to headbang to while you drive—and that’s okay! –Matt Crane