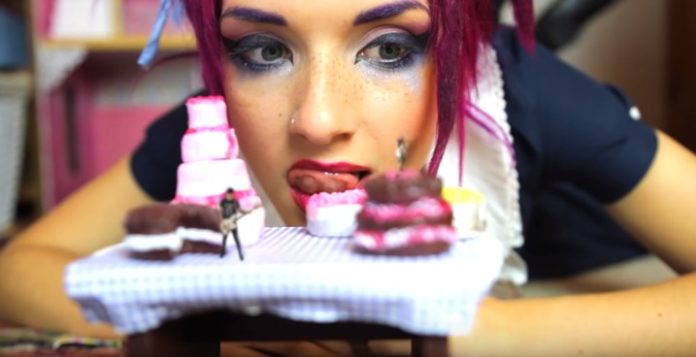 Sometimes the rock world can get noisy, and we don’t just mean in decibels or static. Often the signal-to-noise ratio is more noise than signal. But no worries: We read, listen to and watch everything so we can sort it for you. Here are some of our favorite new songs and videos of January 2016.

Who doesn’t love a good copyright battle? Whether it was the existence of two different bands called Queensrÿche, or the similar situation that befell L.A. Guns, heavy metal is full of litigious skirmishes between once cooperative bandmates. Abbath was the grease painted face of long running Norwegian black metal legends Immortal, striking out on his own with an eponymously monikered new trio. The man whose passport reads Olve Eikemo counts fellow black metal luminary King Ov Hell (Gorgoroth) as bassist in the new band. “Winterbane” is the first single from their self-titled debut, offering up a super-sized serving of the frostbitten blackened thrash that became Immortal’s calling card on their more recent output. Fans of the Blizzard Beasts will not despair at “Winterbane”—or at least, if they do, it’ll be in the fun, black metal way.  – Ryan J. Downey

Indie rockers Cayetana released their two-song EP Tired Eyes earlier this month, and the new music is appropriately titled: Both songs are more relaxed than their older, punkier work on 2014's Nervous Like Me. In “Freedom1313,” guitarist and lead singer Augusta Koch sings sad lyrics about stress and exhaustion. And that's understandable, considering the band's crazy touring around the U.S. last year, which included performances at both Denver and Chicago's Riot Fests. —Annie Nickoloff

Gashing away at sheeny strings from the get-go, “Hanging Around” is pure bliss by Basement standards. Vocals shine under a Brit-rock sun, and maybe a little Jim Adkins thrown in for good measure. The band's darker underbelly that lurks like depression is less prevalent here, the tones don't crush as hard as neighboring tracks, but it's to their benefit to let some lighter fare fly. Like we've already seen before, these alt-emo loving lads know how to write well-rounded, essential albums. —Brian Kraus

Creeper continue their streak of having zero disappointing songs with “Black Mass,” the first single from their impending third EP The Stranger. What is the Stranger, exactly? You can get a glimpse of the mysterious monster haunting the dreams of the EP's cover character Madeline in this clip. Creepy. —Cassie Whitt

Upon hearing this song for the first time, I remember yelling and slamming my hands on my desk, overwhelmed by the strength of its chorus. The band themselves have called it the track they're most proud of on their new mini-album Bruises. We premiered its eerie video on APTV earlier this month, and it has since received the biggest response of their cinematic trilogy accompanything Bruises. —Cassie Whitt

HANDS OFF GRETEL– “My Size”

Hands Off Gretel, who are featured in the 12 Bands You Need To Know section of our PVRIS issue, are a modern riot grunge band, bringing back grrrl power, channeling Courtney Love's attitude, Brody Dalle's grit and Amanda Palmer's lyrical perversity. Their neon video for “Just My Size” will throw you straight back into the Lisa Frank painted '90s. —Cassie Whitt

PANIC! AT THE DISCO – “Crazy=Genius“

If you have yet to indulge yourself in Panic! At The Disco’s first No. 1 album Death Of A Bachelor, you are missing out. “Crazy=Genius” is a wild, energetic ode that can unearth the crazy in anyone. The coolest part of the song is that Brendon Urie tells a story from two perspectives. It not only captures Urie’s unorthodox personality, but it celebrates being far from ordinary as he pleads his case in the lyrics.  This song is full throttle from start to finish, and it just goes there. —Sarah Force

Pinegrove is the newest sign with Run For Cover, and to be candid, they are stupidly good. Bands aren't supposed to have such a firm grasp on themselves and their style this early in their career. But that might be because it's not that early in their career—their debut release Everything So Far is a curated piece of all their finest works of the last five or so years. With that kind of antecedent, “Old Friends” has a lot to live up to. Unsurprisingly, the song is a signature blend of blunt and complex, a witty companion to Everything So Far's opening track “New Friends.” “I keep going over it over and over/My steps iterate my shame,” sings Evan Stephens Hall, evoking a morose nostalgia for the spirit of newfound love: “I knew happiness when I saw it.” —Kika Chatterjee

SCOTT LEE ANDREWS – “Draw Me Like One Of Yr Belgian Girlz”

Scott Andrews was the filter-free lead vocalist in the Cardiff-based double-bass and drums trio Exit_International, who recorded two albums of guitar-free psychosis before he decided to take a break, get married and piss off to Australia. While E_I are on the back burner, Andrews is flexing his neurosis quite nicely with a series of EPs titled Jaws Of Deaf. On the second installment of the series, there's “Draw Me Like One Of Yr Belgian Girlz,” (Kate Winslett unavailable for comment), an overmodulated, jagged rave-up that can go a few rounds with Canadian noiseniks METZ and walk out with merely one bloody nostril. The song is typical of Andrews' cantankerous, contrarian mindset: Not only are there no bass guitars on the EP (he couldn't afford to take them Down Under), there's another track (“Cupid Stunts”) that sounds like Weezer playing through Mötorhead's amps. You really need more of him in your life, because let's face it, you and your friends are too fucking earnest. —Jason Pettigrew

SOMOS – “Thorn In The Side”

As the second single off of their upcoming No Sleep/Hopeless Records release First Day Back, Somos' “Thorn In The Side” is reminiscent of their earlier work from Temple Of Plenty, with a clear indication of growth. With a signature rhythmic back-and-forth between the verses and chorus, this single dynamically displays the band's emo-inspired intricate guitar work, contrasted by a simplistically bouncy chorus. All of this considered, Somos take their songwriting a step forward with beautifully arranged backing vocals, tying everything together in this track's bridge. First Day Back comes out Feb. 19. – Atreyue Ryken

THE SUMMER SET – “FIGURE ME OUT”

Breaking through the limitations of genre, the Summer Set have survived their identity crisis and produced “Figure Me Out” as a result. “I’m a bit too pop for the punk kids / but I’m too punk for the pop kids,” the first verse laments, chronicling the band’s struggle with image. However, the Summer Set are rejuvenated with “Figure Me Out”—by extracting heavy influence from Legendary, but allowing the feel of the first two albums to shine through, the track tells the Summer Set’s story through polished lyricism, ravishing instrumentation and a lovely video. Instead of shunning their genre-bending style, the Summer Set have embraced it, proving that the band are back—and most certainly better than ever. —Caitlyn Ralph