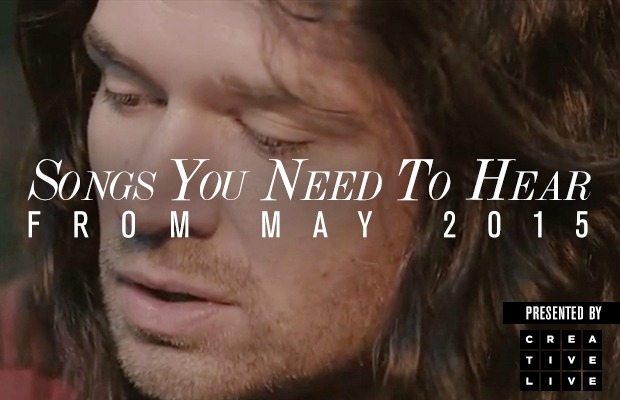 Sometimes the rock world can get noisy, and we don’t just mean in decibels or fuzz. Often the signal-to-noise ratio is more noise than signal. But no worries: We read, listen to and watch everything so we can sort it for you. Here are some of our favorite new songs and videos of May 2015 brought to you in partnership with our friends at CreativeLive.

It's been nearly four years since we last heard from hybrid metalcore merchants Drop Dead, Gorgeous. Members have moved on in pursuit of other endeavors such as the Bunny The Bear, Bleach Blonde and now, 888. The band consists of DD,G's frontman Danny Stills, drummer Danny Cooper and keyboardist/programmer Aaron Rothe. “Critical Mistakes,” which is culled from their debut EP, The Decades, captures the trio's breed of sunshine-filled altpop in the most memorable of ways. Stills has traded in his glass-shattering screeches for warm, inviting melodies, which are augmented by playful samples and rhythmic consistency, giving the track a relaxed twenty-one-pilots feel. Drop Dead, Gorgeous fans may find it difficult to relate to 888's pop tendencies, but once past that initial shock, the floodgates of potential give way to a bright future. —Tyler Sharp

ANNABEL – “Having It All”

Akron, Ohio’s Annabel possesses the rare gift of writing songs as galvanizing as they are poignant. Put another way, their shit gives me the feels. “Having It All” the title track from their upcoming release on Tiny Engines (out June 9), taps into that feeling of sweet, almost-exclusively teenage discontent, so palpable when you’re young and transitioning between identities as quickly as you change favorite songs. Singer Ben Hendricks has a clear voice that is somehow both piercing and comforting, riding a chugging, forlorn slice of ennui you can imagine being chanted back at the band in a crowded basement. As far as “voices of generations” go, Annabel is a vital force. —Lee McKinstry

Look toward the big D (read: Detroit, Michigan) if you want to see the future of hardcore, because the rumor is when you go to a store to buy the Armed's impending fourth album Untitled, the clerk behind the counter puts on a welder's mask and hands it you with a pair of fireplace tongs. The follow-up track from last month's “Forever Scum,” “Polarizer” threatens to cauterize your ears shut with all of its noisy fury, throat shearing and jarring breakdowns. The video is the stuff that cease-and-desist orders are made of, and if it pisses more people off, it only reinforces hardcore's keystone tenets of articulating rage and the obliteration of any boundaries. After several listens, you get the feeling the Armed are more interested into hacking into communication satellites—possibly even NORAD—than they are worried about “gettin' this pit goin.'” —Jason Pettigrew

Ceremony’s fifth album, The L-Shaped Man, takes the California hardcore band’s Joy Division obsession to new levels. Younger listeners could be forgiven for mistaking Ross Farrar’s stark, arresting vocal affectations for the dude from Interpol. While they share a label affiliation—and probably more than a few pieces in their record collections—Ceremony’s past in the Bay Area scene gives their take on dark ‘80s post punk an angsty edge. There’s a bit of Wire to be heard in this often morose but always interesting breakup album. “Exit Fears” is a plainspoken, straightforward punch in the gut, directly from the gut. Listeners should probably thank whomever broke Farrar’s heart, because the redemptive darkness of The L-Shaped Man is a gift to us all. —Ryan J. Downey

Anxiety’s Kiss is exactly the kind of masterpiece hinted at by Sister Faith, Coliseum’s acclaimed bridge-over-post-punk waters album prior. Louisville hardcore veteran Ryan Patterson initially launched the trio as a back-to-basics sonic assault full of vindictive bile, but amazingly, the noisecore collective has evolved into something even greater. Anxiety’s Kiss demonstrates the full spectrum of the singer/guitarist’s range of emotions, dipping from dark wave pop to discordant crust and back again, without ever sounding disjointed. The sexily moody “Dark Light Of Seduction” is a transformative journey, offering new revelations with each listen. The strength of the relationship between Patterson and producer J. Robbins (Against Me!, Clutch) is evident throughout, which makes sense, given Robbins own history as a diverse performer in Jawbox, Burning Airlines, Government Issue, and Scream. —Ryan J. Downey

A truce between heavy and melodic hardcore is reached on Counterparts' “Burn,” the lead single to their Pure Noise label debut, Tragedy Will Find Us. An early stomp sesh (pre-minute mark) ushers in the precedent of an anything-goes album. The spoken-word break from the screaming is no doubt a nod to Misery Signals (“The Year Summer Ended In June”) and the metalcore brethren before them. Counterparts have stepped it up, and vocally, there's fire on Brendan Murphy's tongue taking the performance to a new level. —Brian Kraus

It’s hard not to chalk up Courtney Love’s new single “Miss Narcissist” as the same sort of autobiographical venting she first made her signature on 1994’s “Miss World.” Both titles suit her well, as the snarling Hole frontwoman has always been both among and beyond her listeners—a disgustingly human, obscenely honest malcontent flaunting the sheen of her mistakes.  She’s never been shy about her addiction to the spotlight. Her sneer has always been an acquired taste (I, for one, worship at the altar of Love), and on this new track, it rings with a kind of vitality and commitment she’s been lacking for a while. “Miss Narcissist” is raw and feedback-tinged, a possible byproduct of being her first release on Wavves’ Ghost Ramp label.  Love is currently touring with Lana Del Rey, and the sad Love-drawn artwork for the single evokes the kind of tragic discontent both women are so known to sow. —Lee McKinstry

After hearing “Can’t Kick up the Roots” from Neck Deep’s new album “Life’s Not Out to Get You,” I am extremely excited to hear the rest of the album.  Nothing makes a pop-punk fan happier than a song about your hometown with gang vocals and a video with candid shots of your friends to boot.  If this song is any indication of the album we all need to prepare our calves for 30 minutes of constant jumping and circle pits during Warped Tour this summer. —Amber Funk

Old Wounds are about to rip your goddamn spine out. The New Jersey hardcore quartet forewarned this violence with “Rest In Piss,” the debut single from their impending album The Suffering Spirit, which batters the listener from introductory scream to feedback fadeout. Need further proof this album is going to be a destroyer? Check out “Never Sleep Again,” which debuted exclusively on AltPress yesterday. —Cassie Whitt

THE STORY SO FAR – “Phantom”

Their self-titled album means more stringent pop-punk from the Story So Far boys, but you could herd “Phantom” in with songs like  “Placeholder” and “Clairvoyant.” Clearly, this black sheep is the darkest of the down-and-out, droning away to Parker Cannon's heartbroken-record of “'Cause it's hard to attract you/Got me so dark blue.” —Brian Kraus

Watch Adam Lazzara cry and commit arson for four minutes. It will be the most moving microcosm of your day unless you rescue and create a loving bond with a blind kitten or something, I promise. —Cassie Whitt