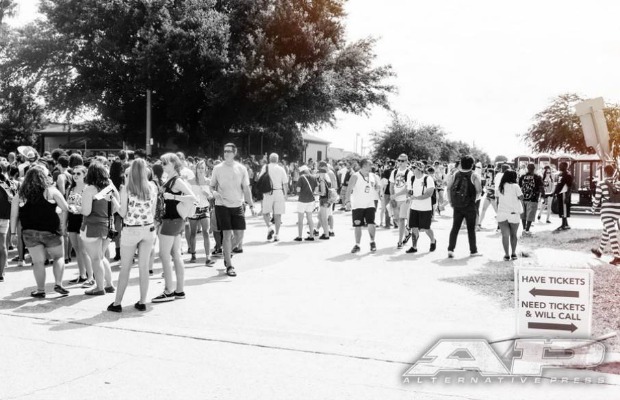 We’re the barricade kids–the ones who will stop at nothing to be at the front of the crowd when our favorite bands take the stage. You take the bar and the moshpit and just try to fight your way up here. We dare you, because after waiting in line for twelve hours, we’ve earned this and aren’t going to take any of your shenanigans.

Here are just a few of the things that those of us who line up at ridiculous hours before shows can relate to.

1. Line-jumpers are your mortal enemy.
They’re here to thwart your entire mission of the day, and what’s worse is they’re always either really arrogant or really oblivious about it.

2. There’s always one person who will defend the pack.
About an hour before doors, people will start to flood in and form a crowd around the spots you have called home the whole day. Most of us remain meek and whisper about them and hope they go away, but somehow there’s always one sleep-and-food-deprived specimen among those at the front of the line who will spout a quick and snotty, “Um, the line is back there,” while the rest of us just glare, probably without even realizing that at this point, we all look like the kind of people you just don’t want to fuck with. It’s pretty effective.

3. Bathrooms are a luxury.
“Yeah, the Subway next door will let you use theirs, but only if you buy something. Chipotle keeps the bathroom key behind the counter. There’s a gas station a few blocks away, but they don’t have a public restroom. You can try the laundromat? If you’re sneaky, Dunkin Donuts won’t notice.”

4. Snacks are essential.
Anyone who has passed out or come close to it at a show knows this, and those of us who perch ourselves out in the elements all day know we must take it especially to heart. We tend to roll up with grocery bags filled with sustenance and may have even trained ourselves to drink the gross Gatorade flavors just to stay hydrated. I once drank a bottle of pomegranate-flavored protein syrup goop that probably wasn’t meant to be consumed as a beverage just so I wouldn’t pass out while in the crowd.

5. Venues with multiple entrances are the worst.
“You line up at that door; I’ll man this one. As soon as the box office opens we’ll ask them [30 times] which door they’re opening first.” >>>