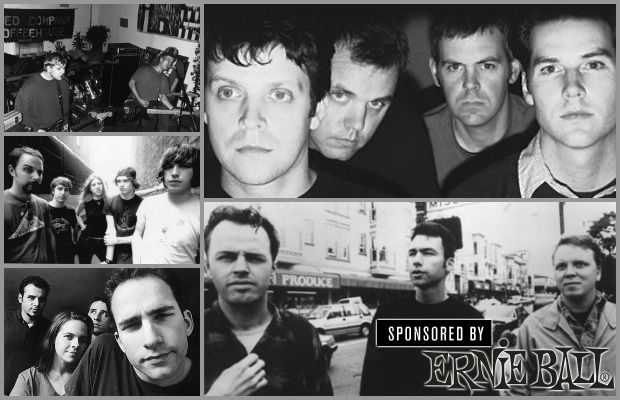 It’s all the rage nowadays: All the punk and emo bands the current generation of music fans didn’t get to see in their prime are being pulled out of retirement. Some do a full tour or two (Mineral, Sunny Day Real Estate); others play shows here and there (Refused, At The Drive-In, Cap’n Jazz, the Promise Ring, Knapsack, Quicksand) and reissue their catalog with bonus cuts (American Football, Texas Is The Reason, Piebald); others have returned in full, releasing new music like they never left (Braid, the Jazz June, Gameface, the Get Up Kids, Hot Water Music, the Dismemberment Plan, Smoking Popes, Boy Sets Fire, the list goes on).

It’s practically impossible to stay broken up these days—yet somehow, these 12 bands have managed to do it. I’m here to change that. Attention, members of the following broken-up ’90s emo bands: Take off your Home Depot apron, pick up your guitar and let’s do this already.

FORMED: 1995
BROKE UP: 2006
CURRENT STATUS: This Brooklyn-via-Wisconsin trio, who pretty much spent their entire career being ahead of their time, haven’t made a peep since their final show in December 2006. Drummer Bill Kuehn plays with Les Bonhommes; vocalist/bassist Caithlin De Marrais’ last solo album, Red Coats, dropped in 2011; guitarist/sometimes vocalist Kyle Fischer currently works as a Tibetan translator and isn’t currently making music in any sort of public forum. C’mon, man!

FORMED: 1993
BROKE UP: 2003
CURRENT STATUS: After disappearing quietly in the mid-2000s, this San Diego math-rock quartet have reunited a handful of times since; once in 2009 to support Jimmy Eat World on a handful of “Clarity x 10” shows (one of which I flew to specifically to see No Knife), then again earlier this year for two shows at the beloved local venue the Casbah for the club’s 25th anniversary (which I found out about way too late, long after tickets had sold out and airfares had skyrocketed). Drummer Chris Prescott currently tours with Pinback; vocalist/guitarist Ryan Ferguson has released solo material sporadically; all four members need to stop what they’re doing and make a goddamn record right now.

FORMED: 1989
BROKE UP: 1997
CURRENT STATUS: One of the best post-hardcore bands in existence, Jawbox teased a reunion in 2009 when they played Late Night With Jimmy Fallon to celebrate the reissue of their classic third album, For Your Own Special Sweetheart. (It was such a special event, AP editor in chief Jason Pettigrew flew to New York City just to attend.) Then, nothing. Not a peep. The quartet had to have received offers to do more, but for whatever reason chose to let sleeping dogs lie, much to the chagrin of people like me who were just a shade too young to catch them in the mid-’90s, but now have enough disposable income to waste flying anywhere in the country to see them reunite. Hey, Riot Fest: This is one of those things that you could and should make happen next year.

FORMED: 1993
BROKE UP: 1997
CURRENT STATUS: The best (only?) emo band to come out of Denver in the mid-’90s, Christie Front Drive are perhaps best known as the band who inspired Jimmy Eat World to get their shit together and stop playing pop-punk. They’ve played a handful of low-key reunion shows in recent years in such locations as Denver (2007), New York City (2011) and Montreal (2014) but have yet to fully commit to the reunion thing, to which I say, “Hogwash.” Gentlemen, it is time.

FORMED: 1992
BROKE UP: 2000
CURRENT STATUS: This Philadelphia post-hardcore/dub/indie rock band haven’t reunited in the decade-plus since they amicably split, save for a brief period in 2003 that resulted in one new song. Frontman Ralph Darden now lives in LA and DJs under the moniker Major Taylor; guitarist Brian Sokel still lives in Philly and occasionally gigs with TV Casualty, a Misfits cover band fronted by Ted Leo. The members are all still on good terms, so a one-off show doesn’t seem impossible, just improbable.

FORMED: 1996
BROKE UP: 1999
CURRENT STATUS: This brutal emotional metal trio from Detroit couldn’t make it out of the ’90s alive, self-destructing before the new millennium came and heavy music became much more in vogue. Frontman Sean Madigan Hoen went onto a variety of different, more melodic bands (most notably the Holy Fire); he’s currently a writer in New York. When I asked him earlier this year about the odds of a TOI reunion, he responded, “The music we made was borne of such raw pain and aggression and terror, really, that it would be completely ridiculous for me to try and tap back into that.” While I agree with him to an extent, man, it would be sweet to see them tear up someone’s basement or a VFW hall with no prior warning.

FORMED: 1993
BROKE UP: 2005
CURRENT STATUS: This brilliant Boston band—initially a noodly emo trio, then a jazzier quartet, then back to a trio—were an anomaly in the ’90s indie scene, but Geoff Farina’s brilliant songwriting and guitar chops won them plenty of fans regardless. The band amicably broke up after a European tour in 2005 due to Farina developing hearing problems; however, he has still stayed active in music with his band Glorytellers and more recently Exit Verse, whose self-titled debut album comes out Nov. 17. I have kicked myself for a decade because I skipped Karate’s last Cleveland show, thinking, “Oh, I’ll catch them on the next tour,” and there never was one. So please, guys, help me get over this trauma and reunite already.

FORMED: 1996
BROKE UP: 2000
CURRENT STATUS: Formed in Boston before later relocating to San Diego, Jejune were an incredible coed emo trio that came from the ’90s Jimmy Eat World school of quiet-loud-quiet songwriting—in fact, they released a split 7-inch with JEW in 1998, which features one of the best emo power jams ever, “The Early Stars.” (Coming up right behind it is “Greyscale,” taken from Jejune’s debut album Junk.) Their sophomore album, This Afternoon’s Malady, was an incredible step forward in musicianship that is heard in all the nü-gaze bands sweeping the scene now. (Seriously, Pity Sex should cut this band royalty checks, whether they realize it or not.) All four members of Jejune still live in San Diego, yet there’s been not a peep of reunion speculation in the 15 years they’ve been gone. Here’s to hoping this helps kickstart a well-deserved return.

FORMED: 1996
BROKE UP: 2005
CURRENT STATUS: This math-rock quartet were light years ahead of their time, and their influence is heard in dozens of bands, from Circa Survive to HRVRD. They broke up following a string of terrible luck, having their van and trailer stolen and stripped on their first big tour in support of 2004’s self-titled album. At the time, things probably felt a little bit hopeless so they threw in the towel, but all the members are still friendly with one another. Guitarist/vocalists Keeley Davis and Jonathan Fuller even formed a new band called Heks Orkest a few years ago, which only lasted for a few shows and a two-song 7-inch (which, in the interest of full disclosure, I should tell you I released on my record label, Youth Conspiracy, but I’m not putting a link or anything here so you know my intentions are pure when I write about this). Next year is the 10th anniversary of their dissolution, and I couldn’t think of a better way to celebrate it than if they got back together and played Demure start to finish. In my back yard. On my birthday. (What, too much?)

FORMED: 1986
BROKE UP: 1996
CURRENT STATUS: Okay, before you run to the Facebook comments at the bottom, I understand you might not consider Jawbreaker an “emo” band. But they kinda were, especially on their major-label swansong Dear You (seriously, “Jet Black” might as well play on a loop in changing rooms at Hot Topic). Regardless, the band were fucking amazing, never got their due and have since become legendary in the scene. They’re pretty much one of the only defunct punk bands that thousands upon thousands of people would pay absurd amounts of money and travel crazy distances to see reunite. All three members still make music, and they are all on good terms, too. 2015 is the 20th anniversary of Dear You, so why not use that as an excuse to finally strap on that guitar and strum the opening chords to “Boxcar” again, Blake?

FORMED: 1995
BROKE UP: 2003
CURRENT STATUS: Speaking of bands ahead of their time: Elliott were as forward-thinking as they came. A literal post-hardcore band (they were formed out of the ashes of popular Louisville, Kentucky, hardcore outfit Falling Forward), Elliott pushed themselves forward on every release, losing fans in the process but developing a unique sound all their own. False Cathedrals laid the blueprint for bands as diverse as Anberlin, the Juliana Theory and My Chemical Romance with their powerful, anthemic, heavily layered emo-rock. (There’s a children’s chorus in the first song!) Frontman Chris Higdon plays in Frontier(s) and drummer Kevin Ratterman is a producer and sometimes-member of Wax Fang; those are the only two people who made it through all Elliott releases, so if a reunion were to happen, it would be up to those two guys to find one of the numerous guitarists and bassists that filtered through the lineup to come back, too. (And if they got Jay Palumbo and did a US Songs tour? I would pop so goddamn hard.)

FORMED: 1997
BROKE UP: 2004
CURRENT STATUS: The Anniversary broke up right as things were really getting interesting. Their early work was heavily indebted to scenemates the Get Up Kids (and is great in its own way) but their sophomore (and final) album Your Majesty was an incredible psych-pop masterpiece. And seeing them on tour at that time was a real trip, with the band constantly deconstructing their own songs and re-working them onstage. The band were dropped from Vagrant Records, allegedly due to a personal relationship that developed between two of the members (one of whom was already in a relationship with a member of another band on the label). If it feels very Fleetwood Mac-esque, it is—but given that time healed all wounds for that band, maybe the Anniversary can patch things up and get back out there?