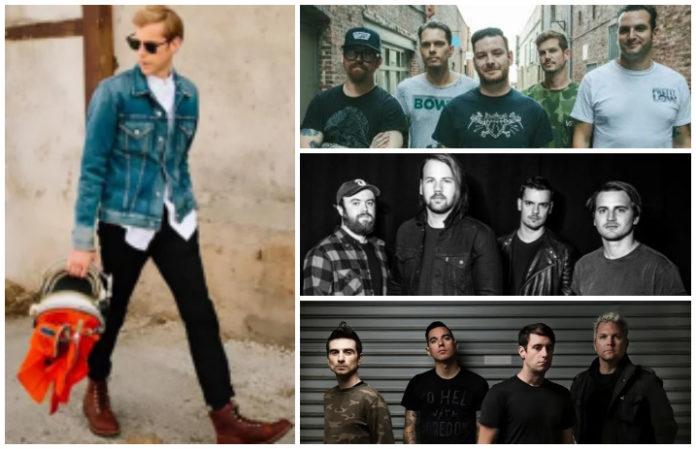 From cancer research to supporting their fans to challenging societal norms in their lyrics, there are loads of ways musicians can make a difference. Here are 11 artists who are doing everything they can to make the world a better place.

Andrew McMahon is legendary enough, having fronted Something Corporate, Jack’s Mannequin and Andrew McMahon In The Wilderness. But with his diagnosis of acute lymphoblastic leukemia in 2005, he survived because of his sister’s stem cell transplant. He then went on to form the Dear Jack Foundation in 2006 to fund cancer research. Since then, the charity has earned over a half million dollars in donations. So inspiring!

Metalcore outfit Silent Planet are one of those groups filled with individuals who use their platform to raise awareness of important issues and try to positively affect the world. Conceptually, they are not afraid to tackle any topic out there: Past tracks have reflected on the persecution of Native American peoples, refugee orphans and PTSD.

With lyrics tackling child abuse, depression and addiction, the men in Beartooth are some of the most humble in the rock scene. Aligning themselves with important ideologies and organizations, the band have focused on finding ways to improve themselves and others. They put action to their sentiments with a recent memorabilia auction, with the proceeds going to the mental health charity Hope For The Day.

Andrew Koji Shiraki is arguably one of the most accepting individuals to grace music. During his shows, you’ll probably hear about how necessary and special it is for communities to come together and love each other. The politically-conscious solo act even has founded his own organization, COLORMAKE, that’s dedicated to bringing activists together with the goal of positive change for all people.

The punk attitude of Green Day has been inspiring our scene for decades. From Warning to American Idiot, the group have always been known for their rebelliousness and not holding back on talking about social issues. The band’s charity work is actually quite impressive, as the list includes Artists For Peace And Justice, Children With Leukemia, 21st Century Leaders, Habitat For Humanity, Music For Relief, Red Cross, MusiCares, Music In Schools Today and many more.

Senses Fail are truly a band that have seen their fair share of personal ups and downs. Vocalist Buddy Nielsen has always used his platform to talk about pressing societal issues. Buddy has been through everything from sexual identity struggles to addiction and is now fearless in opening a dialogue with fans.

Frontwoman Jenna McDougall takes it upon herself to make sure that every Tonight Alive show is not only entertaining, it’s also a moment for reflection, self-love and positivity. In addition to her own onstage ways of making sure every fan feels heard and appreciated, the rest of the band are no slackers: Two years ago, guitarist Jake Hardy shaved his head for the Leukaemia Foundation.

Pennsylvania-based Anti-Flag are one of the most politically charged bands to exist… like, ever. Getting their start in the ’90s, the four-piece have been supporting their causes such as Amnesty International, Greenpeace and Democracy Now! since the beginning. In case that wasn’t enough, their songs are steadfastly anti-war and pro-equality. It’s safe to say Mr. Trump is going to be hearing a lot from them in the next four years.

Stick To Your Guns

With music that embodies the hardcore attitude, they are a group of people that care intensely about what they do and who listens. Vocalist Jesse Barnett is an incredible speaker and uses his touring platform to motivate fans to go out and make changes in the world.

With literally two albums with the word “hope” as a main part of the title—Know Hope and Hold On Pain Ends (H.O.P.E.)—the Color Morale have a mission of providing inspiration and encouragement through their music. They have also been active with many suicide prevention organizations.

The U.K. metalcore act is made up of individuals with hearts of gold. Whether they’re fighting for animal rights or writing lyrics about the faults of society, they are involved in making the world a better place.

During a headline show at the Brixton O2 Academy, drummer Dan Searle had the chance to speak to the crowd addressing life after the loss of his twin brother, Tom: “Don’t sell yourself short in this life. Find what you love, embrace it, go for it with everything you have. Don’t accept a mediocre seat because other people in your life have.”

August Burns Red frontman Jake Luhrs is known for his philanthropic organization HeartSupport and even receieved the Most Philanthropic award at the 2016 APMAs.

HeartSupport began when Luhrs would meet fans at the merchandise table at ABR's shows and listen to them talk about their lives. He wanted to create an online community where anyone dealing with any issue could go to recieve support from others.  No matter what you're going through, HeartSupport has a place for everyone.