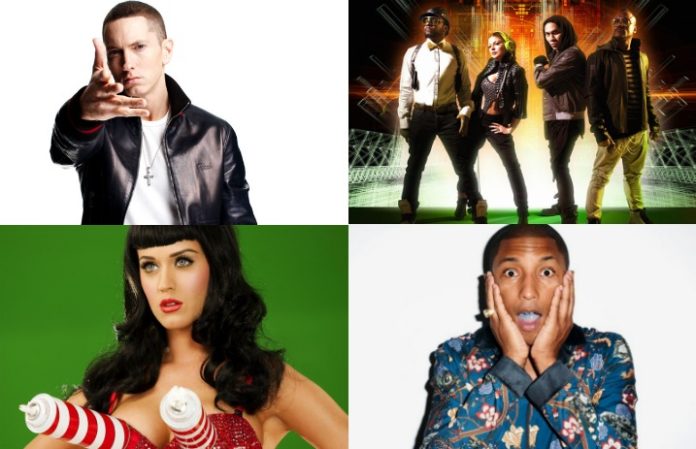 Warped Tour consists of predominantly rock artists—it is unofficially known as the punk-rock summer camp—but that doesn’t mean its stages have been exclusive to the genre. Head below for some surprising acts who have appeared on the festival since its 1995 beginning.

Before she was headlining arena shows full of costume changes, elaborate light shows and numerous props, Katy Perry was sweating it out on Warped Tour. Perry’s debut was a self-titled Christian rock record released under her birth name Katy Hudson in 2001. She took on the Perry moniker and released her second full-length, One Of The Boys, in June 2008, just days before her first and last Warped Tour stint where she did things such as stage dive, crowd surf and lose her shoes (as seen above).

Veteran punk Billy Idol isn’t exactly what you’d expect to see on a stage at Warped Tour, but the “White Wedding” singer was indeed there in 2005 for a handful of dates. The Generation X frontman’s appearance isn’t as unexpected as you may think, however, having likely influenced and landed on the playlists of many Warped regulars such as Black Veil Brides who covered “Rebel Yell” for their Rebels EP in 2011.

The then hip-hop trio known as the Black Eyed Peas only had one album, Bridging The Gap, under their belt when they jumped on Warped in 1999. Taboo, will.i.am and apl.de.ap were sans Fergie until 2002 when they did a revamp of their sound for their breakthrough album, Elephunk, in 2003. Prior to this, however, the trio were filling the stages of Warped with a raw hip-hop sound.

Singer-songwriter Beck began to make a name for himself with the alt-rock hit, “Loser,” in 1993 before it was officially released via his third full-length, Mellow Gold in 1994. Beck released his fifth full-length, Odelay, in 1996 before joining Warped Tour where he was included on that year’s music sampler (as seen above). The following year, he was nominated for three Grammys, two of which he won, proving Warped is continuously a platform for many up-and-coming artists at various stages in their career.

Before she was being coached by Blake Shelton on The Voice, winning CMT Music Awards and touring with the likes of Rascal Flatts and Tim McGraw, Cassadee Pope was the frontwoman of up-and-coming pop-rock band Hey Monday. Signed to Pete Wentz’s Decaydance Records, Hey Monday toured with the festival in 2010 with their debut full-length, Hold On Tight, and a forthcoming EP, Beneath It All. They would release two more EPs following the tour before going on an indefinite hiatus as Pope pursued her solo career.
ICE-T

Ice-T roughed it on Warped Tour in 1999, a year before he would become known for something other than his music—acting on Law & Order: Special Victims Unit. He would return to the Warped stage in a way with Body Count in 2009 as part of the festival’s The Vans Warped Tour 15th Anniversary Celebration DVD where he also discussed his time on the road.

Before he had a multi-platinum hit with “Happy” and a chair on The Voice, Pharrell Williams was in the band N.E.R.D. with Shae Haley and fellow Neptune Chad Hugo. Fresh off the release of their full-length debut, In Search Of…, N.E.R.D. joined the tour in 2002 amongst acts such as Alkaline Trio, Good Charlotte, New Found Glory, Every Time I Die and Yellowcard.

With only his debut, Infinite, and follow-up, The Slim Shady LP, available to the masses, Eminem joined Warped Tour in 1999 on the cusp of making it big. He hung around with fellow hip-hop acts the Black Eyed Peas and Ice-T, as evidenced in the video above, but also wanted to chat with seasoned Warped goers about why people are always throwing things at him on stage.

G-Eazy is currently making waves with “Me, Myself & I” featuring fellow Warped Tour alum Bebe Rexha (formerly of Pete Wentz’s now defunct Black Cards). However, back in 2012, he was touring with Warped and promoting Must Be Nice, an album that featured collabs with artists such as Hoodie Allen and Mod Sun, the latter of whom was also on the tour that year.
JOAN JETT

Rock icon and overall badass Joan Jett may have begun her ascent up the ladder of success in the ’70s with the Runaways before forming Joan Jett & The Blackhearts, but that didn’t stop her from making an appearance at the 2006 Warped Tour. Here she pumped out hits such as “Bad Reputation,” “Crimson And Clover” and “I Love Rock And Roll.”

He may be currently topping charts with “I Took A Pill In Ibiza,” but back in 2010, Mike Posner was known for a whole different track. Shortly after exploding onto the scene with “Cooler Than Me,” he hit the stages of Warped with the infectious pop number that certainly stood out in a sea of rock.

After becoming “Myspace famous” but prior to helming a makeup line, Jeffree Star had a short-lived solo music career. While he may now be rocking the cosmetic business and fighting with Kylie Jenner over the quality of her own line,, Star was once strutting across the Warped Tour stages in 2008 and 2009.