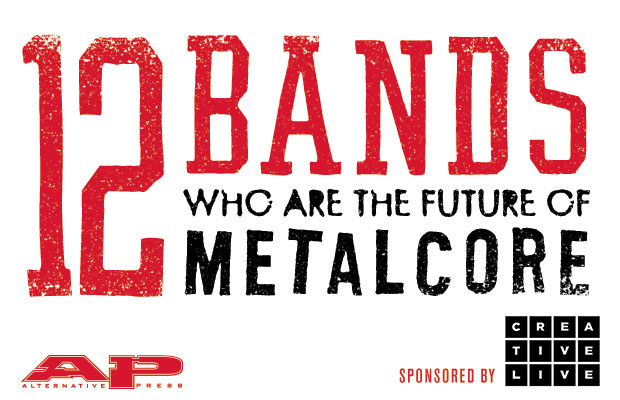 Genres evolve, and metalcore is certainly no exception. Not too along ago, the very idea of keyboards and dubstep breakdowns being incorporated into the genre would’ve been laughed at. Now, it’s commonplace. As the breakdown-heavy form continues to grow into something else entirely, new leaders have emerged and continue to emerge in the scene. These acts are the ones that will lead the genre to both new artistic territory and a more commercially viable reach in the years to come. Here are 12 bands that represent the future of metalcore:

Issues have really pulled metalcore out of the dark depths it had begun to sink into. Turntables, feisty cleans, nü-metal flair and superior musicianship made Issues’ self-titled LP one of the most fun jams of 2014—and it’s only their first full-length! The album felt like the first time a metalcore record was treated like a pop effort; it was sonically perfected and fine-tuned in every way prior to release. It doesn’t hurt to crack the Billboard top 10 with your first album, either.

Brighton, U.K.’s Architects are just doing it right. Sam Carter screams like an absolute monster and pours his heart into every line and every performance. Though the band have been around for nearly 10 years, they’ve never really broken through in the U.S. like they should. Their latest album, Lost Forever // Lost Together, may finally be the release that catapults them into the god-level tier of metalcore bands.

3. BRING ME THE HORIZON

Bring Me The Horizon are an interesting case, because they started as deathcore, moved to more of a metalcore sound, and have since created a unique genre of their own. Make no mistake about it, BMTH are the biggest band in metalcore today. (Of Mice & Men could give them a good run for their money, though.) They’ve been pushing the boundaries of their sound, evoking an obsession-level devotion from their fans. When frontman Oli Sykes confessed his past drug abuse at the APMAs, it only seemed to win them more devotees.

This hardcore-punk-infused metalcore band rose from the ashes of crabcore’s finest, Attack Attack! Frontman Caleb Shomo was always a standout talent in his former band, switching from keyboardist to frontman overnight. Now, the Tooth (Can we call them that? The Tooth?) have found a great partnership with Red Bull’s record label and released easily one of the best albums of 2014, Disgusting. The album got a four-and-a-half-star review in AP, and for good reason. This writer will admit it: I wasn’t sure if the band were ready for a spot on the AP cover yet, but after hearing Disgusting’s first single, “Beaten In Lips,” I was sold. Shomo’s hardcore fury is leading metalcore and Beartooth fans in a new, positive direction.

One cool thing about Memphis May Fire is that they seem to be exposing a new audience to metalcore: fans of bands like Sleeping With Sirens and Pierce The Veil. Obviously, the typical As I Lay Dying enthusiast may not be into MMF, but if they can be a gateway act for post-hardcore kids, then that’s great! Agree with him or not, you’ve have to respect frontman Matty Mullins for not giving a fuck and sticking to his beliefs. The dude’s not trying to be a people pleaser; he’s trying to make music. It’ll be interesting to see if the pop sensibilities he explored on his solo record will translate to the next MMF release.

Metalcore’s true leaders of tomorrow are adding their own unique inflection to the sound: Beartooth sound more like a punk band, BMTH sound atmospheric and trippy—and Motionless In White are bringing industrial back. Chris Motionless doesn’t just sound like Marilyn Manson; his fans follow him and look to him as a figurehead in much the same way. MIW’s new album, Reincarnate, sold 30,000 copies in its first week, three times the amount their last album did. Alongside Falling In Reverse, the band essentially headlined Warped Tour over the summer, which was one of the first signs of their impending dominance in the genre.

With their image, videos and conceptual themes, Crown The Empire aren’t so much just a band as they are an impressive experience. Metalcore cinema at its finest, it’s no surprise their new album, The Resistance: Rise Of The Runaways, did as well as it did. It’s going to be really interesting to see what kind of theatrics they come up with as they grow as a band and access more recourses.

The Word Alive started as a side project and have since grown into one of the dominant forces in metalcore today. Their secret weapon? They don’t have one, they have an arsenal: Luke Holland is a monster on drums, and Tony Pizzuti and Zack Hansen make for one of the most formidable, talented guitar duos in the genre. Vocalist Telle Smith is a power-hit screamer but remains one of the most underrated clean vocalists around. He should be ranked up there with the Craig Owens and Anthony Greens of the world. Let’s not forget that TWA have never made the same album twice; they’ve continued to grow and experiment.

Okay, okay, Wovenwar aren’t metalcore per se. (They have no screaming.) But they come from the ashes of the quintessential metalcore band, As I Lay Dying. The instrumentation on their debut album radiates a familiar, melodic metalcore sound. So far, the band have been a really good showcase of what metal musicians (in this case, the four former AILD members) are capable of when they branch out to more melodic, radio-friendly sounds.

Australia’s Northlane are definitely one of the more exciting young bands in metalcore today. Synergizing the genre with prog-metal riffage and clean singing, they’ve built up an impressive following in a short time. With the recent departure of their frontman, Adrian Fitipaldes, now is the time that will make or break the band. They seem to be handling it well enough, though: On Facebook, they’ve shared clips of each new singer they auditioned and asked their fans for input.

Another proggy metalcore band, ERRA have the grace of Emarosa and the slam factor of August Burns Red. The band have picked up considerable buzz after their latest Tragic Hero release, Augment. Is this the start of a prog revival? If so, these guys will lead the way. Fun fact: They’re named after the Akkadian (the world’s first empire) god of mayhem and pestilence. How brootal is that?

Chelsea Grin bring a speedy, fun dose of deathcore to the metal world. On their latest album, Ashes To Ashes, the band struck a nice balance between doomy deathcore (“Playing With Fire”) and shredding metalcore (“Clockwork”). As they continue to diversify their sound, the band’s rough edge may become more palatable to the masses (kind of like how Bring Me The Horizon’s did).