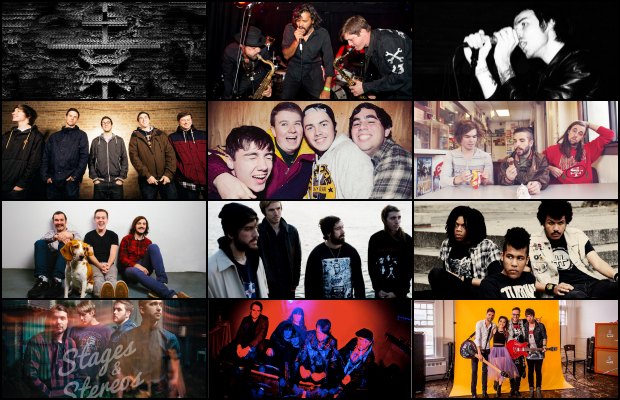 You know our cover stars like Issues, Touché Amoré and Real Friends, and you’ve seen the full-page artists like State Champs, Ghost Town and Beartooth, but beyond them, there are 88 more bands who aren’t displayed quite as prominently but who are just as rad. For your discovery pleasure, here are some of the hidden gems we’ve been enjoying from our annual 100 Bands You Need To Know issue that you may have skimmed over.

Well, this is clearly not targeted at a mid-20s man, but I can't help myself, just like all the hardcore kids who worship Taylor Swift (I see you.) Crystalyne's “Punks Don't Dance” is more on the Avril Lavigne end of the cute-girls-in-pop spectrum—and not just because they're both Canadians. It's crush (“Favorite band is Green Day?/I like that”) and burn (“She looks like a Pop-Tart/Toast that”) in the catchiest way. — Brian Kraus

If nü-rave sincerity bastions like Passion Pit and Foster The People are the soundtracks for granola-eaters who want to link arms and skip to the nearest drum circle, Dangerous Boys Club's amalgam of ’80s-imbued synth pop, goth noir and lo-fidelity recording techniques should be playing through the Bluetooth devices of fashionable muggers and their sexy sociopath girlfriends, right before they show up to relieve said neo-hippies of whatever valuables they may have. (Would you expect anything less from a band whose lineage includes screamo progenitors Heroin and goth-punk avatars Antioch Arrow?) Sexier than all those antiseptic bands with (verb) the (noun) names and far uglier than, say, Cold Cave's recent chrome-plated exercises in urgency, DBC are making the dark side even more enticing and opaque. — Jason Pettigrew

MELT YOURSELF DOWN – “Fix My Life”

Guitars? Who needs 'em? British punk-jazz sextet Melt Yourself Down are bringing the pan-ethnic party with two sax players, an exuberant vocalist-cum-hypeman and a driven rhythm section, guaranteed to blow the bad vibes out of your life. Listeners with the good sense to back Gogol Bordello's gypsy energy blasts and Flogging Molly's Celtic rave-ups will dig MYD's synergy of New Orleans' party swagger, New York no wave (cf. James Chance And The Contortions who wrote the song the band adopted their name from) and Middle East-flavored phrasing. You don't need to be in the French Quarter, Loisaida or downtown Cairo to fully appreciate MYD's fire—just a great understanding of what “abandon” means. — Jason Pettigrew

Chicago natives Knuckle Puck come from the same school of music as the Story So Far and Real Friends, but they’ve got a little more grit to them. Translation: They write impressive pop-punk songs that will leave you feeling nostalgic for high school, summer vacations and driving nowhere with your friends and leave you feeling a little heated and pissed off—especially after listening to “No Good,” where frontman Joe Taylor raggedly sings, “It’s people just like you that make me the pessimist I am.” That’s just aching to be turned into a Tumblr gif. – Brittany Moseley

I discovered this band last year through Youth Code, another of our 100 Bands you should definitely check out, and when I cued up this 2012 song, the then-intern who shared my office raised an eyebrow and quipped, “Getting a little goth over there…” Nah, Bridjet, more than a little goth. I, and Night Sins, were getting a lot goth. For anyone who has ever swooned over ’80s dark wave and wished there were more bands cultivating the sound in modern times, Night Sins are a wish come true—but don’t get too excited. In our 100 Bands blurb, Kyle Kimbal, the man behind the project, said that his desire to progress as an artist could change Night Sins’ sound altogether for their next release. — Cassie Whitt

Gloomy teenage grit channeled through the sonic veins of pop-punk can hook and snare on its early-aughts nostalgia alone. Perhaps that’s why it’s 2014, and we’re still listening to/writing about emo bands from Long Island with lyrics like this: “I can’t live like this/Wasting all my time/Saying things will get better/But knowing that’s a lie.” Be sure to only play this one at night, at a bonfire, where the flannel shirts and teenage angst flow like wine. — Matt Crane