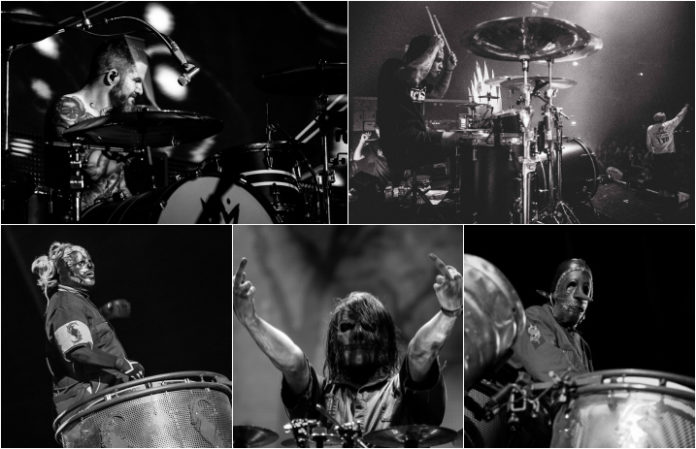 Broken fingers, cut hands and even a black eye—for our latest drummers special, we asked our lineup about the gnarliest injury they’ve ever endured from playing.

[Photo by Shaun Vaughn]
I thought I poked out my eye once, but it turns out I didn’t. I whacked myself in the eye during a song, and I genuinely thought I had knocked my eye out. Turns out I’d just opened my eyebrow, so I had to go straight from the show to go get stitches.

[Photo by Shaun Vaughn]
Probably my knees have been the worst. You rely on them so much, and the meniscus in both my knees is shot from all the jumping. It wasn’t a momentary thing that caused the damage, but I’ve been doing this to my body for years, and it just takes a toll.

[Photo by Shaun Vaughn]
I tore my ACL. I jumped off the drum riser and the lights changed, I hit the ground, and thought I broke my leg. Everyone thought me laying on the ground and rolling around was part of the show. Finally, my drum tech realized what was happening and scooped me up, carried me back up to the kit so I could finish the show. Afterward, I went to the emergency room, found out it was torn and then played another six months of shows with a torn ACL. It was terrible; I was in psycho pain all the time.

[Photo by Jack Gorlin]
Luckily I haven't broken any bones—knock on wood—but I have cut myself on cymbals and the rim of my snare before. I came off stage recently and there was blood all over my hand! I hadn't felt it the entire show. It wasn’t too gory, but definitely a surprise.

​[Photo by Ashley Osborn]
Playing drums, I've never really been injured at all. I usually just get really gnarly blisters, but after a few shows, it’s all good!

MAXX DANZIGER, SET IT OFF

[Photo by Andrew Cramb]
We were playing a show a few years ago, and somehow during all the chaos I cut my hand open. There was so much blood I was able to write my name on my snare head in it. Afterward, I noticed the sticks I was using were stained red, which actually looked pretty cool. You know the scene in The Shining with the elevator? It was a lot like that.

[Photo by Nathan Brookes]
A few years ago, my stick broke while I was playing a show and a sharp piece of it flew right into my eyeball. It wasn't too terribly bad, and luckily the song was almost over. I had to take a quick breather before starting the next one for sure.

[Photo by Bryce Hall]
As a drummer, you're constantly dealing with cuts and blisters all over your hands. But my gnarliest injury was probably when I accidentally hit myself in the face with my stick at a show, and my nose started profusely bleeding. Not my finest moment.

[Photo by Bryson Roatch]
Apart from ripping my knuckles open and my drums looking like a murder scene, the gnarliest injury I've encountered while playing was when my middle finger on my right hand stuck to my palm. I didn't feel anything pop and as soon as we left the stage before the encore, my singer, Jacoby [Shaddix], said it's just a cramp. I was freaking out a bit, then he gave my forearm a rub down and my finger released and was back in its normal position. We went back out and finished the set with no other problems. I've also taken sticks to the eyeballs, and thought I broke a finger once hitting a rim.

[Photo by Justin Segura]
Just smashing fingers. Like, on rimshots, catching my fingers between the sticks and the drum, or just hitting my hand instead of the stick. I’ve just gotten some pretty bad gashes. But it looks cool because there’s blood all over the snare head and all over the sticks and stuff and [it’s] probably getting shot up in the air at the time I hit the snare. When that happens, we become a Cannibal Corpse cover band.

[Photo by Michael Rex Carbonell]
While playing, I smacked the edge of my eyeball with the tip of my stick extremely hard, and it hurt so bad—but I just kept rollin’. I had a gnarly black eye for a couple weeks. It was on Warped Tour in 2011.

[Photo by Ashley Osborn]
I recently gave myself a really gnarly fat lip and bled all over the kit, and also gave myself a black eye that lasted our entire European festival run.

For more tales about drumming (and posters featuring these awesome stick wielders), pick up our latest issue of AP, featuring Melanie Martinez. The issue is in stores now.