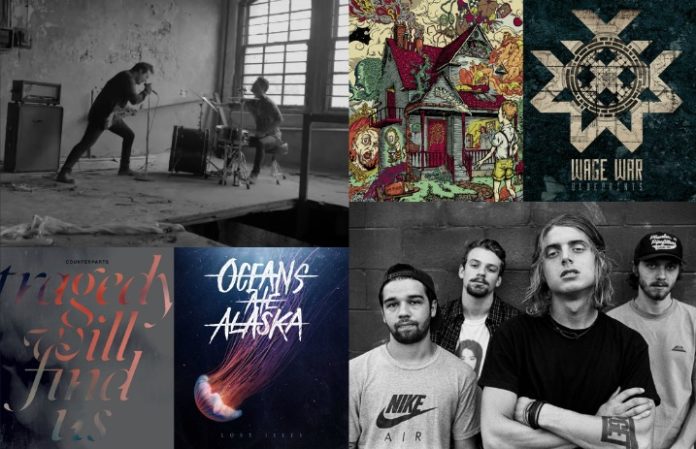 The heavy side of music offers an incredibly vast spectrum of soundscapes. Whether you prefer punk roots or something on the technical side, there is something for everyone. Below, we have collected 12 groups from across heavy music we think you should be listening to. Take a look and give them a spin—you might just find your new favorite band!

Oceans Ate Alaska formed in 2011, releasing two EPs before signing to Fearless Records in 2014. They dropped their debut LP, Lost Isles, in 2015. Hear the lead single, “Blood Brothers,” above.

Progressive death metal outfit Fallujah have released two LPs since their formation in 2007: The Harvest Wombs (2011) and The Flesh Prevails (2014). They will release their highly anticipated third studio effort, Dreamless, April 29 via Nuclear Blast. Hear the lead single, “The Void Alone,” above.

Alabama’s Erra released their third studio album, Drift, earlier this month on Sumerian Records. The album features former Texas In July frontman J.T. Cavey. The group’s debut and sophomore LPs, Impulse and Augment, were released on Tragic Hero Records in 2011 and 2013. Stream “Orchid” from Drift above.

Ohio natives My Ticket Home formed in the late ‘’00s as a metalcore band. After releasing two EPs and a full-length, the group altered their sound on 2013’s Strangers Only to feature more nü-metal and alternative tendencies. My Ticket Home are expected to released a new album later this year. Listen to “Hot Soap” above.

Make Them Suffer are one of Australia’s many flowering heavy acts. Since releasing their Lord Of Woe EP in 2010, the band have released two full-length efforts and shared the stage with names such as Parkway Drive, Thy Art is Murder and Oceano. Hear “Threads” from their latest LP, Old Souls, above.

New Jersey hardcore outfit Old Wounds released their latest studio album, The Suffering Spirit, in 2015 via Good Fight Music. You will be able to catch them on every date of this summer’s Vans Warped Tour. Listen to “Rest In Piss” from The Suffering Spirit above.