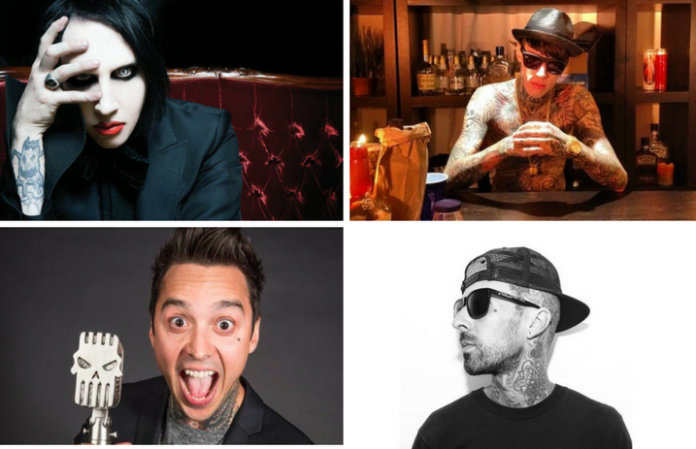 Tattoos are common in the scene, and some designs stand out more than others. While sometimes tattoos have a good story behind them, other times, they’re chosen because they look pretty cool. And none look cooler than these.Here are 13 iconic tattoos and the musical icons who got them:

Awesome day yesterday shooting lifestyle video with @theparkerbranch! Thanks @thugdavis & @thomastoneryo for the shoot! Thanks @ashleykendal for also being a part of it! ������

Metro Station frontman Trace Cyrus is almost completely covered in tattoos, but the largest one is the portrait of Apache chief Geronimo taking up the majority of his back.

Motionless In White’s CEO got the word “Halloween” tattooed onto his hand as a representation of his personality.

Sebastien Arseguel My great friend and brother You will be missed Love you forever Rest In Peace . . http://suicidepreventionlifeline.org 1-800-273-TALK

The lead guitarist of Metallica got a belly tattoo that reads “Made in SF 11-18-62” in a half-circle around his belly button.

good morning from the Blvd. ☀️✌��️

MGK has a large anarchy symbol tattooed on his stomach. It’s meant to show off his political beliefs.

It’s hard to pick just one tattoo on Barker, but this one’s a highlight. Taking up the majority of his back, Barker has a huge family portrait of his parents and children.

This Madden brother debuted a tattoo that took up the majority of his head. The geometric design features a skull in the center of it.

Frontman O’Callaghan made an interesting move by putting the Maine song lyrics across his chest. The lines he chose are: “We all have been degraded/We all will be the greatest,” from the song “We'll All Be.”

I hope all you people that hate me at least picture me like this. @alysoncoletta

Nielsen, the vocalist of Senses Fail, has some epic knuckle tattoos that spell out the phrase “DON’T CARE” between both of his hands.

Pierce The Veil’s guitarist has an owl tattoo takes up his entire neck and was drawn by one of his favorite artists Tyler Densley, according to an interview with iHeartRadio.

Manson has two tattoos on each of his forearms; on one of his arms, it’s a skull and a tree, and on the other, it’s a figure called Uncle Creepy with cobwebs.

Jeffree Star has a Jesus-like portrait of the Nirvana frontman in the middle of the chest, with the phrase “Rape me” on a banner underneath.

On a lighter note here's a flashback to the #AndyBLACK tour in Japan a few months ago. We had so much fun exploring the train stations in Tokyo on our way to Osaka☺️ Seriously though we appreciate all of the support and love you guys give us through everything and again it's important to remember that all of us as people have things we regret. Moments that we look back on and wish we could have done differently. What's important is to remember that you have the chance every day to strive to become a better person and make your own tomorrow. Let's all do our best in the future to treat each other with kindness and compassion and learn from mistakes❤️ ps spot the @mryanni10 in this one #whenIwasblondeforamonth

If the Black Veil Brides frontman’s love of Batman wasn’t already obvious from all of his Batman clothing, the tattoo on his arm makes it abundantly clear.