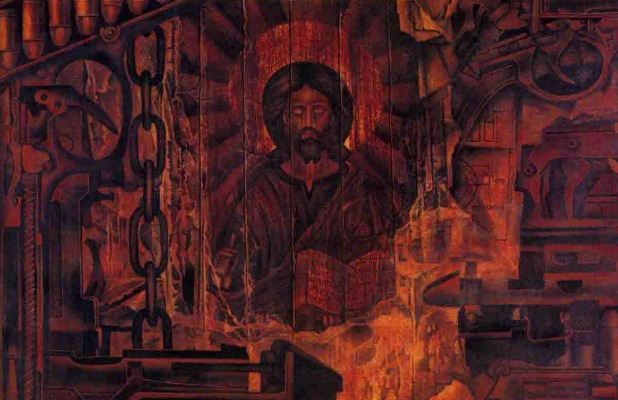 Metalcore is an extremely popular genre today, but for some reason, the genre’s founding ancestor, melodic death-metal, hasn’t really crossed over into the “scene”—and there’s just no excuse for that. If anything, melodeath is just a faster, more aggressive, technical and sonically gorgeous alternative to its breakdown-heavy counterpart. Many of the following musicians were the first to incorporate stylistically “pretty” and epic sounds into death-metal, along with blazing solos and buzz-saw guitars. Here are 12 melodic death-metal songs any self-respecting metalcore fan should like:

1. IN FLAMES – “Embody The Invisible”

In Flames are genre pioneers—one of the “founding three” of the Gothenburg Sound—and “Embody The Invisible” is the perfect example of why. The speedy track is probably the most melodic on their classic 1999 full-length, Colony. Vocalist Anders Fridén’s screams have a certain tearing sound to them that is just irritably brootal.

At The Gates’ Slaughter Of The Soul is pretty much the defining album for melodeath. One listen to its title track will show you why this band inspired waves of new death-metal and metalcore bands. The song was released in 1995, but it sounds like it came out last week. When compared to their contemporaries at the time—In Flames and Dark Tranquillity—it’s astonishing just how far ahead of them ATG were.

Another one of the founding members of the Gothenburg Sound, Dark Tranquillity have a style that’s more barbarous and mythological. This song is taken from the band’s 2005 album, Character.

Heaven Shall Burn are probably the closest to metalcore on this list, and their cover of this Edge Of Sanity classic is positively scorching. The song is taken from Heaven Shall Burn’s 2008 album, Iconoclast (Part 1: The Final Resistance).

After At The Gates called it quits, vocalist Tomas Lindberg formed death-metal supergroup Nightrage. The singer sounds about as close to a dragon as a human can get on this track, which is taken from the band’s debut, Sweet Vengeance.

Children Of Bodom play a style of melodeath that’s remarkably pretty and sprinkled with electronic effects, but “In Your Face” is a good balance of their stylistic elements. The song is from the band’s 2005 album, Are You Dead Yet?.

It just wouldn’t have been possible to include only one In Flames song on the list.

Anterior were relatively short-lived but made melodeath in a modern age, paying homage to those who came before them. “Human Hive” is from the band’s 2007 debut, The Age Of Silence.

“Heartwork” is the title track from the fourth album by British extreme-metal band Carcass. The album is considered a metal masterpiece by both musicians and critics alike.

Sweden’s Soilwork are chums with In Flames and have even shot a music video with them. But they dish out their own unique brand of speed-melodeath, as you’ll hear in “Follow The Hollow.” The track is from the band’s 2002 full-length, Natural Born Chaos.

Italian death-metal band Slowmotion Apocalypse tapped At The Gates/Nightrage vocalist Tomas Lindberg for “The Blessing,” and the results were spectacular.

The video for “Blinded By Fear” landed At The Gates rotation on MTV in '95. Can you imagine MTV playing death-metal today?